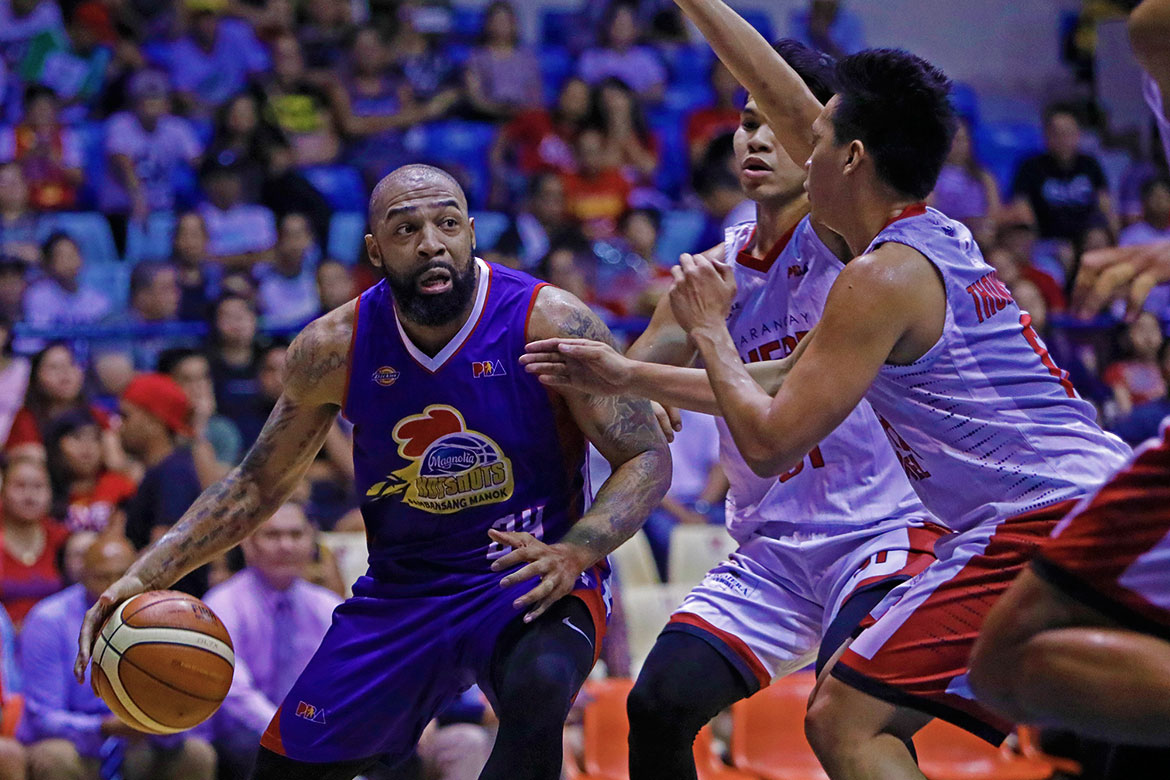 Travis was in his element, producing 37 points along with 16 rebounds and five assists to lead his Magnolia Hotshots past Barangay Ginebra San Miguel, 106-98, for a 1-0 lead in their 2018 PBA Governors’ Cup semifinal series.

This is now the new PBA career high of the former Best Import, eclipsing the 34 he had back in the 2015 edition of the tilt when he was still with the Alaska Aces. His previous record was also against Ginebra in the eliminations.

“I’m just trying to help my team win,” said the 33-year-old forward. “Whatever I can do to help. Last game it was passing, this game it was scoring. Whatever the team needs, whatever coach asks me to do, that’s what I’m gonna do.

“Our guys needed me and I wanted to be there for them. I’m thankful that my shots were falling.”

But as much as he was a vital part of the Hotshots’ victory over the team whom they have yet to beat since Game Five of the 2017 Philippine Cup semis, Travis did not take the limelight all to himself, pointing out that the win was all because of them.

Travis praised the way the Hotshots played defense, especially on Justin Brownlee, whom they held scoreless in the second quarter after he exploded for 20 of Ginebra’s 39 points in the opening stanza.

“I didn’t make him miss shots, our team defense did. I don’t take any credit for anything individually, everything is about the team. Our team did great. We had a lot of lapses in the first quarter, I don’t know how many points he had,” the Magnolia guest player reflected.

“But as the game went on we got better as a team and we corralled better, we made him pass up the ball, and we just kinda locked in a little bit more. It’s not me, it’s a team effort. I can’t take credit for the win, offensively or defensively,” he added.

Another thing that made the American-Macedonian reinforcement proud was their strong belief that they could beat the reigning, two-time Governors’ Cup champions, despite the odds not being in their favor.

“I feel like today we finally believed that we can beat them.

“Before it was in question. Now, I feel like the guys feel that they know that we can beat them,” said Travis.

And that kind of belief is what Magnolia needs moving forward, especially in Game Two on Monday, November 12, at the SMART Araneta Coliseum, as they look to post a commanding 2-0 lead in their best-of-five series.

“And that’s all I want the guys to know that it’s possible.”