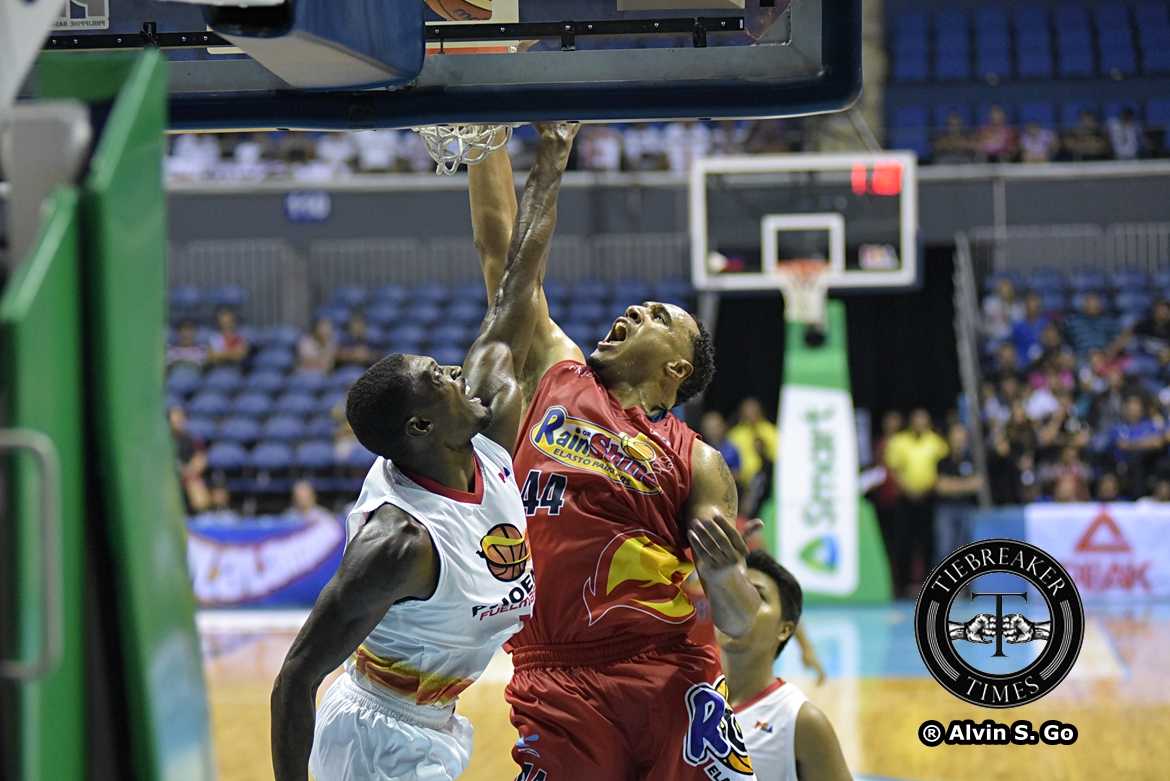 Behind a dominant 41-point fourth quarter, the Rain or Shine Elasto Painters erased a last canto deficit en route to a 106-89 victory over the Phoenix Fuel Masters for their first win of the 2016 PBA Oppo Governor’s Cup on Saturday at the Big Dome.

Dior Lowhorn led Rain or Shine with 26 points on 10/17 shooting, 14 rebounds and a block. JR Quinahan chipped in an efficient 18 markers off the bench.

The Painters entered the final frame down by nine points to the young Fuel Masters squad. They ignited their last quarter berserk behind three triples from JR Quinahan and Gabe Norwood. In addition, the Painters’ defense limited Phoenix to 15 points in the last twelve minutes, half of their production in the third quarter.

In a blink of an eye, Rain or Shine opened the floodgates and led by double-figures. Dior Lowhorn was unforgiving in the paint against the Phoenix’s defense to put the finishing touches against the inexperienced Fuel Masters.

Gabe Norwood was instrumental in the game, scoring 14 points on a perfect 4/4 clip from downtown. After the match, he opened up about his readiness off the bench and come up huge for the big rally. “It was a tough game for us last game. It was great to come out with big shots to help the team come up with the win.’

Moreover, coach Yeng Guiao commended the grit of the Phoenix team but was pleased with his team’s fourth quarter performance. “If they don’t collapse, they’re gonna beat some good teams in this league,” he said.

“The magic number is eight wins in this conference. We’re trying to make the semis for the tenth straight time but pahirap ng pahirap to.”

“We need to win seven in nine games and wala ng mahinang team dito. Any team can beat another team in any night.” Guiao explained.

The Painters scattered 54 points from the paint compared to the Fuel Masters’ 40. In addition, they had more assists 29-23. Despite the loss, Phoenix controlled the offensive boards battle, 20-12 that led to more second chance points, 21-12.

For Phoenix, three players tallied double-figures led by a rising Norbert Torres in his start with 16 points and eight rebounds.

Rain or Shine (1-1) will next face the Blackwater Elite (1-1) on Friday, July 29 at the Ynares Center in Antipolo. Meanwhile, Phoenix (0-3) looks to end their losing skid against the GlobalPort Batang Pier (0-2) on July 31 at the Big Dome.