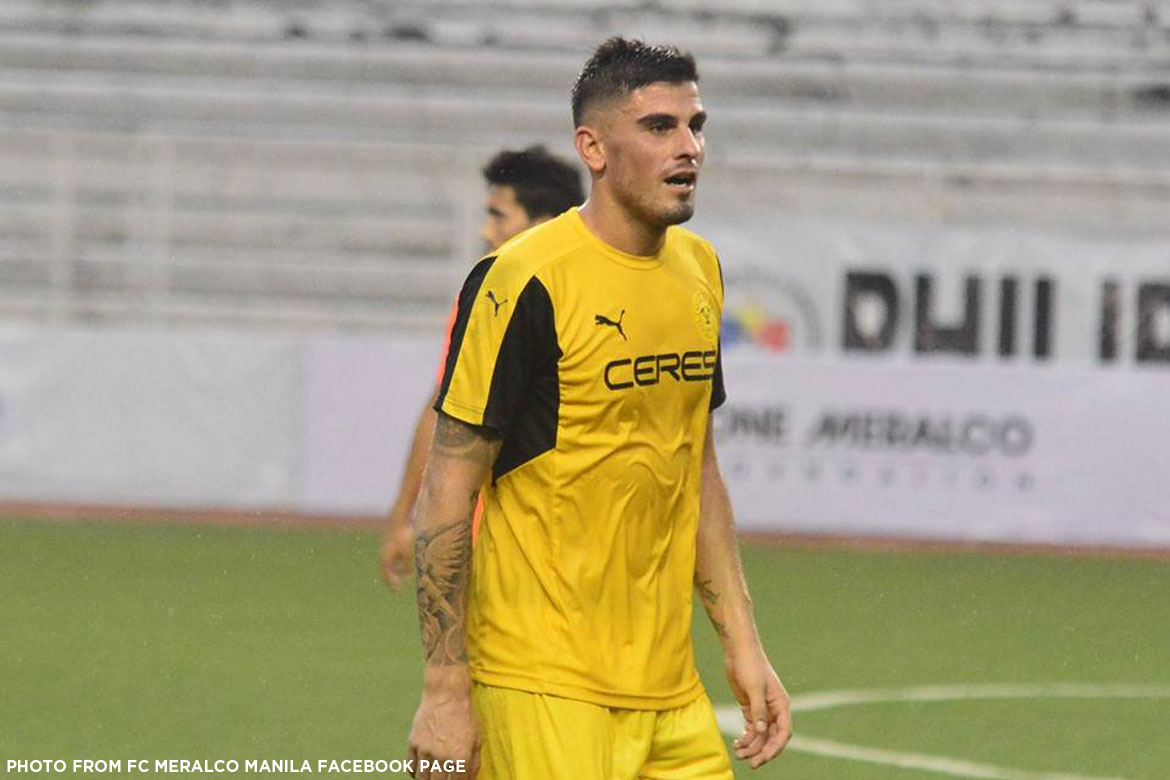 Another round of 2017 Philippines Football League weekend fixtures saw some dramatic games, one of which could very well be the season’s most shocking result yet.

Before this match, Meralco Manila Football Club led the standings without a single loss. That statistic was shattered last July 15, 2017 at their home pitch Rizal Memorial in Manila as the Sparks suffered a 0-7 trashing by Ceres-Negros Football Club.

“The players played very serious today. When we do it like we did it today, no problem,’ shared Ceres coach Risto Vidakovic as he witnessed his men demolish the opposition. Spanish forward Fernando Rodriguez opened the scoring at the 17th minute with a fine strike and the Busmen didn’t look back.

Rodriguez got another goal four minutes later to secure a brace, but it was Azkals star Iain Ramsay who stole the show with a hattrick. The Filipino-Australian midfielder got the first of his goals at the 36th minute to hand his club a 0-3 cushion at the break.

If Manila thought that Negros would take its foot off the pedal, it was wrong. Come the restart, a goal each from Ramsay and fellow national team comrade Stephan Schrock (49′ & 50′) made it a 0-5 with 40 minutes left to play. Ramsay secured got his third of the game at the 74th minute before an own goal by Meralco’s Alvin Sarmiento in stoppage time made the fulltime score read 0-7 in favor of Ceres.

It was a crushing defeat for Meralco and its coach, Aris Caslib, looked to put the drubbing away from his players after the game. “We allowed them to dictate the tempo, but better to lose now than in the important stage of the competition,” commented Caslib.

With the win, Ceres climbs up to 3rd place and 19 points while Meralco retained it’s lead at the top of the standings at 23 points due to other results going the Sparks’ way.

Perhaps the biggest losers of the weekend was Global Cebu which failed to breakdown the Davao Aguilas and had to make do with a 0-0 draw at the Cebu City Sports Complex last July 15.

It proved to be a frustrating night for Cebu as Davao as the latter’s defense proved to be too difficult to score against by the home side. Goal difference would have allowed Global to leapfrog Meralco at the top of the standings courtesy of a win, but it just wasn’t meant to be.

As for Davao, this result is arguably its second biggest of the campaign. The Davaoenos secured a 2-2 home draw against Kaya-Makati a few weeks back and this fixture cements the notion that they can compete with the very best in the competition.

Cebu has to made do with 2nd place and 21 points while Davao is stuck at 6th place with five points.

Kaya-Makati extended its winning streak to three games after it condemned to JPV-Marikina to back-to-back losses last July 16, 2017 at the University of Makati field. Goals from Jordan Mintah and Robert Mendy’s helped Kaya to a 2-0 home win and strengthen its position in the top four.

Kaya coach Noel Marcaida explained, “I’m very happy for the win. All the players performed well. They responded well to the plan before the game. Playing a tough team in JPV, and having a good result like this will really be a motivating factor for Kaya.”

Following a goalless first half, Mintah opened the scoring at the 60th minute after he latched on an Adam Reed pass and finished calmly to break the deadlock. That wasn’t the Ghanian forward’s contribution to Makati’s cause as it was his clearance which allowed Mendy to secure the three points after 80 minutes.

The last fixture of the weekend saw Ilocos United and Stallion Laguna play out a 1-1 stalemate at the Quirino Stadium in Ilocos Sur.

Unfortunately, the game had to be abandoned due to the rain and unplayable condition of the pitch. As per PFL rules, the score stands as the match was canceled at the end of the first half.

Ilocos are still bottom of the league with 2 points with Laguna a place above them with 3 points.

July 19, 2017 (Wednesday) is the next matchday for the league. Per the league’s official website, JPV-Marikina will host Stallions at 4:00 PM while Kaya shall play Ilocos afterwards at 7:00 PM.

Chot downplays shouting match with Standhardinger: ‘It’s all part of the culture’