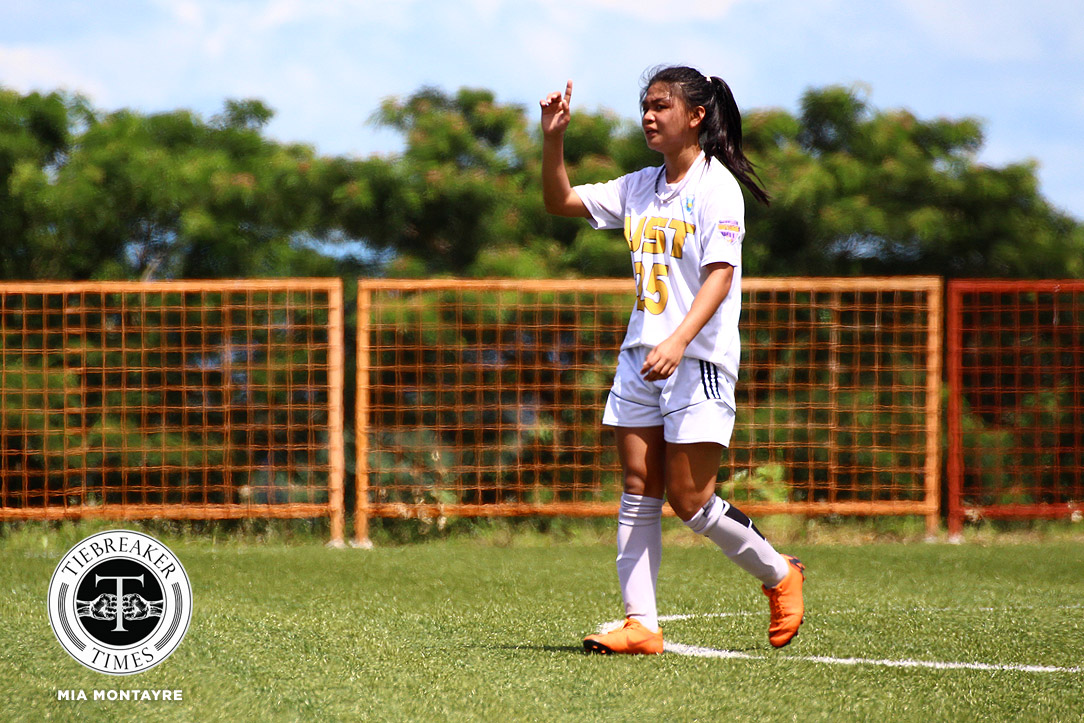 The University of Santo Tomas Lady Booters’ train keeps chugging along at the top with their seventh consecutive victory after withstanding the challenge of top club team OutKast FC.

Record-breaker Bandoja and Tuloy manhandle UP 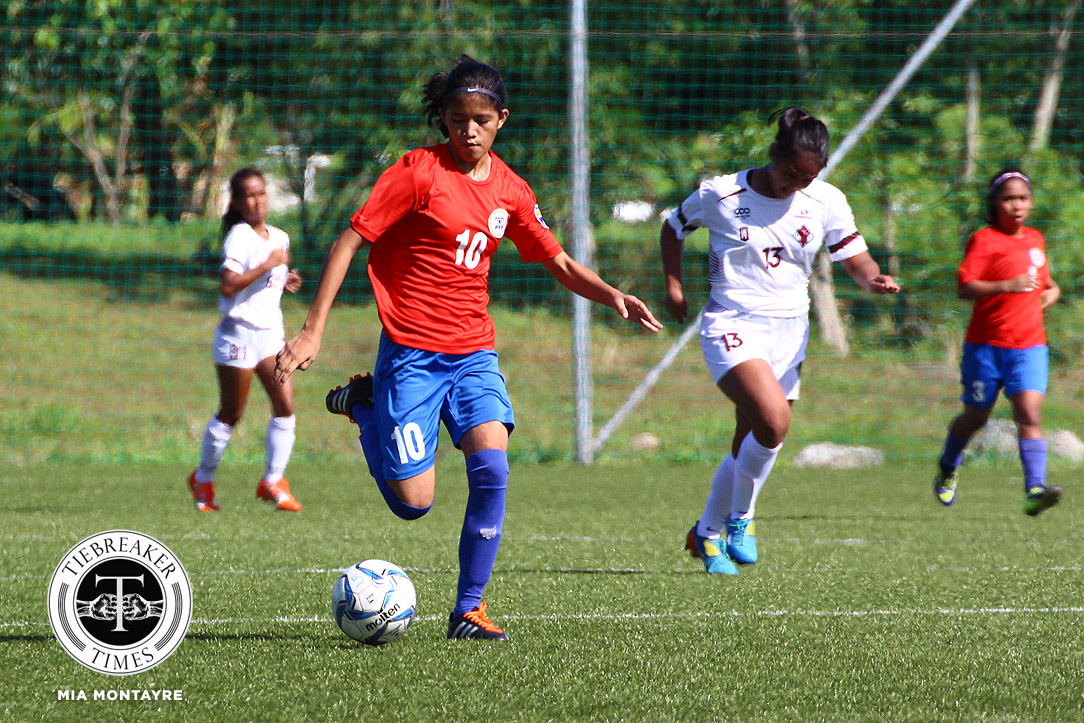 With most of their players unavailable due to a scheduling conflict, the reserve team of the University of the Philippines Lady Maroons were left to face a spirited Tuloy FC squad, who dealt them a humbling 14-0 blow.

The three goals came off of teammates Glory Ann Lado in the 21st minute, and Andrea Jane Limboy’s pair in the 85th and 90th minutes.

Bandoja’s feat has broken the record for the most number of goals scored in a single game, besting University of Santo Tomas’ Shelah Mae Cadag and her eight goals against De La Salle Zobel last September 2nd with the eleven against the hapless UP squad. Her season total is now 17, four shy of matching the league record of 21 currently held by Cadag and De La Salle University’s Kyra Dimaandal.

The young striker from Alabang revealed that she had never imagined being in this position when their club made their debut this season.

Her coach was just as surprised with the outcome.

“Happy ako sa performance ng mga bata, pero hindi ko in-expect na ganun yung UP,” admitted Rey Cuenco, who made sure his wards were not distracted by the different look of their opponents.

The win also puts Tuloy FC back in the top half of the table at 10 points shared with OutKast FC and Far Eastern University, who are separated from each other by small goal differences. 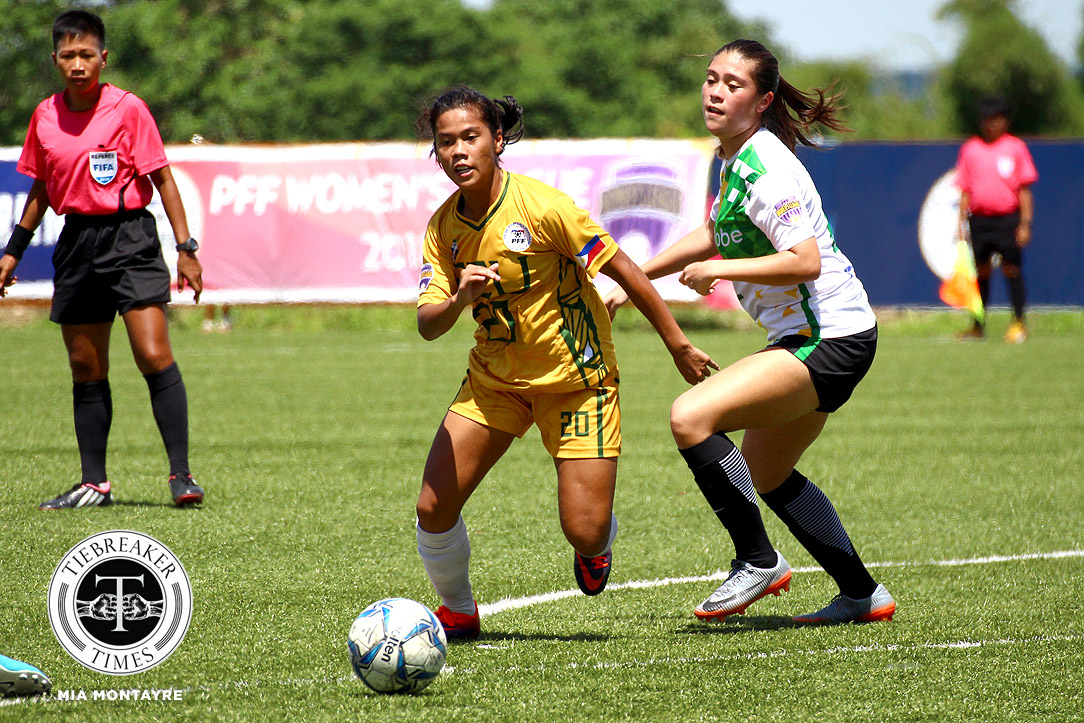 A 9-0 romp past Green Archers United FC was what the Far Eastern University Lady Tamaraws needed to pick themselves up after a disappointing loss in their previous fixture and to stay in fourth.

Roselle Lecera struck first for the Lady Tamaraws after out-hustling GAU’s defenders for a one-on-one with keeper Kayla Santiago in the 11th minute.

Despite GAU playing with only ten players, they managed to hold out for almost the rest of the first half until Mae-Ann Caw-It spoiled the moment with an injury time goal.

In the second half, Joyce Onrubia picked things up for the Morayta-based squad, scoring six minutes after the restart and completing a hat-trick in the 60th and 72nd minutes.

Bia Requerme chipped in a 66th minute goal, while Suettie Simoy topped it all off with a hat-trick of her own in the last ten minutes of play.

And FEU needed the emphatic victory after an up-and-down season.

Yet Artus maintained the squad is still far from perfect. “Kailangan pa rin namin may aayusin sa training. Hindi kami makuntento na nanalo kami ngayon. May mga kulang pa rin. Lalo na next game sa UST, even if we’ll lose we have to give a good fight,” she added. 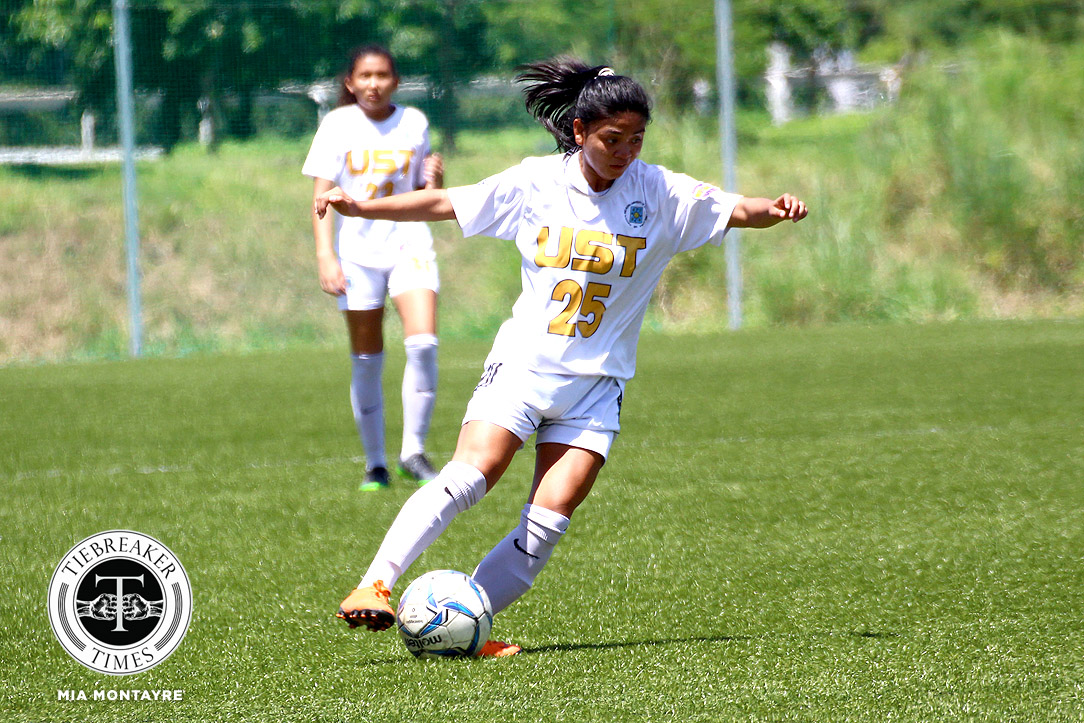 The University of Santo Tomas Lady Booters are inching closer to the title after prevailing 2-0 against the tricky challenge presented by OutKast FC.

With most of their regular starters absent due to orders from the Philippine Football Federation to prioritize national team duties, there was uncertainty in the air for UST over whether the existing squad could deliver.

Rookie Lalaine Durano afforded UST a collective sigh of relief when she outpaced the OutKast backline for a 13th minute strike, to hand her side the advantage in the contest.

In the 70th minute, Pauline San Buenaventura gave the Tigresses the leverage they needed when she took advantage of keeper Jayneth Mercado’s poor judgment of leaving her line with a long-range shot.

Her side may have gotten the full three points out of the game, but Aging Rubio is far from being pleased.

The absence of her core players may figure heavily moving forward, but it is nothing she did not anticipate and prepare for when she began to rely on her rookies and other players in the last few matches.

The proud team from Sampaloc is the first team to break the 20-point mark with their 21 points. Meanwhile, OutKast FC – who suffered their third straight loss since drawing to the De La Salle University last month – hang on to third in the standings with their 10 points.

The PFF Women’s League continues on Saturday, October 27 at the PFF National Training Centre in Carmona, Cavite as Hiraya FC go up against the University of the Philippines at 8:00 A.M. followed by sister teams Green Archers United FC and De La Salle University at 10:30 A.M.

On Sunday, October 28, the University of Santo Tomas will kick off against Far Eastern University at 8:00 A.M. while OutKast FC and Tuloy FC will face at 10:30 A.M.