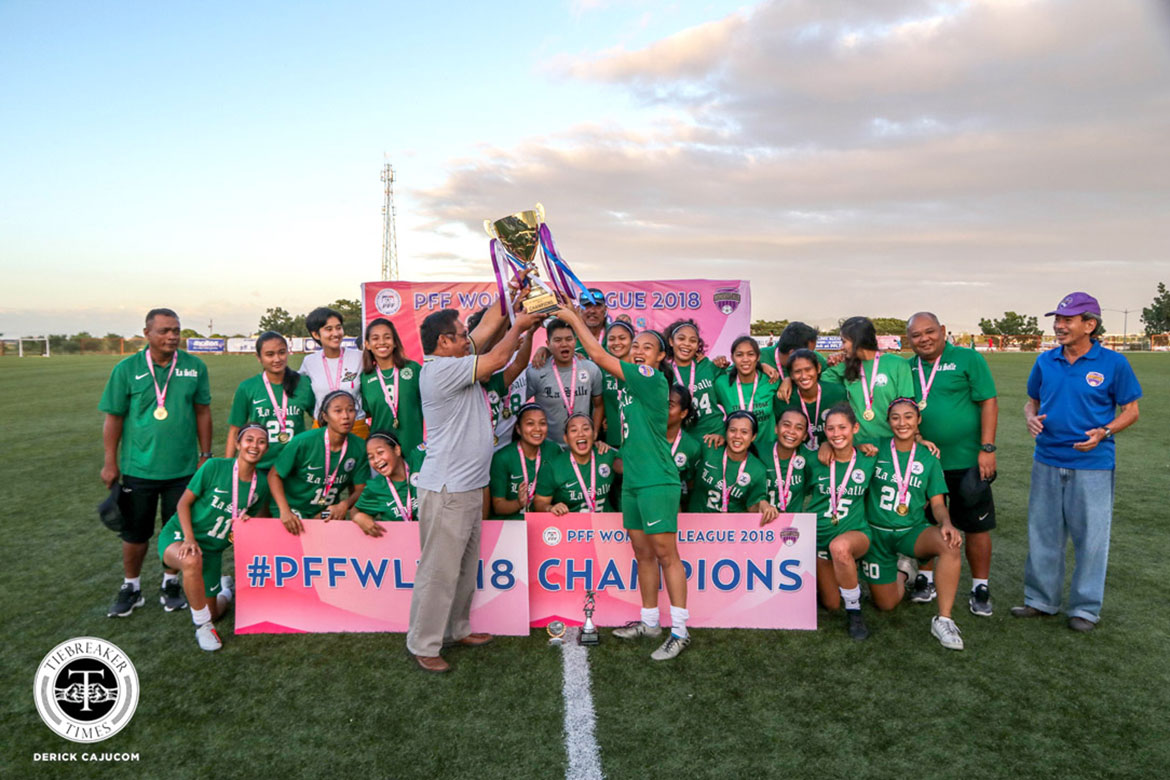 The De La Salle University Lady Archers have added yet another trophy to their growing cabinet after successfully defending this season’s league title when they beat closest contenders and eventual runners-up University of Santo Tomas. 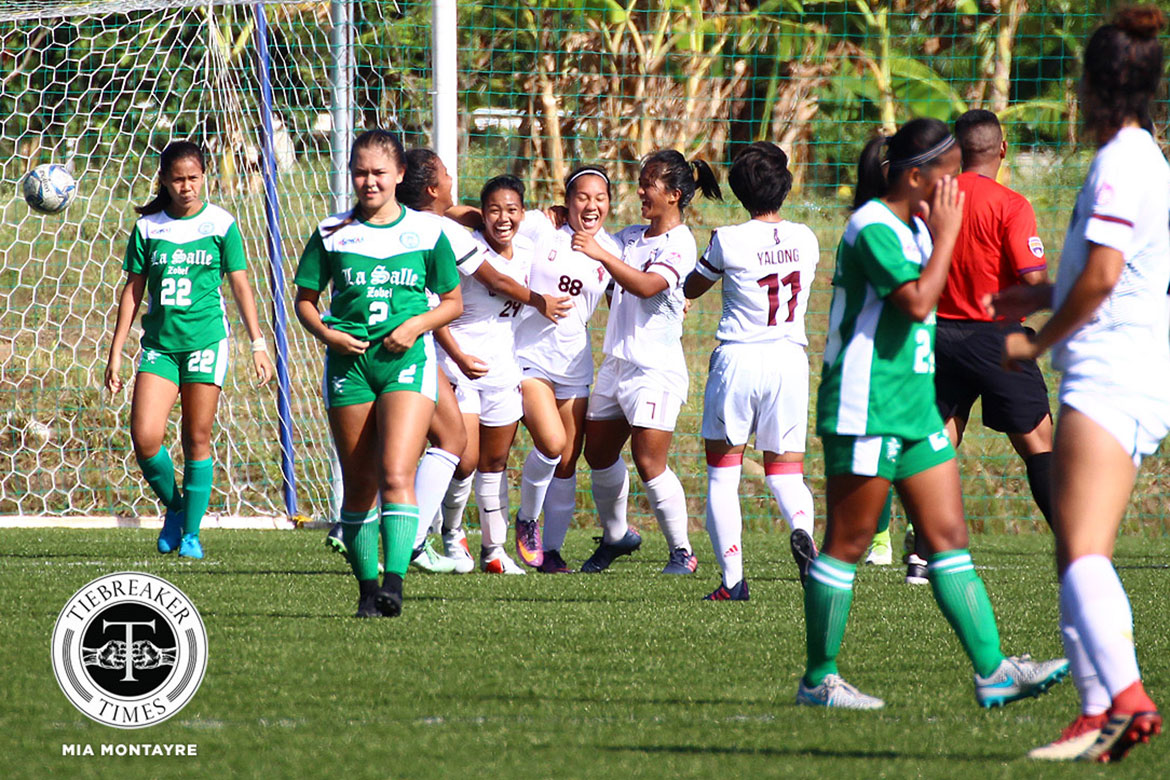 The University of the Philippines Lady Maroons saved the best for last when they finally picked up their first win after a 5-1 demolition of the De La Salle Zobel.

The Lady Maroons didn’t come firing out of the blocks, as they had a shaky start. It took them 30 minutes to get their first goal courtesy of Isabella Dumada-og. Once Dumada-og netted a brace eight minutes later, the floodgates opened for UP.

A flurry of goals went the Lady Maroons’ way before the midway break – Mary Rose Obra in the 43rd, Andrea Montilla a minute later and Sofia Dungca two minutes after that – then made it five unanswered goals at the half.

Zobel’s morale should have dropped – especially with members succumbing to injuries one by one – but the young squad continued to attack. They snatched a consolation goal in the 65th minute by Marinelle Cristobal before she went down with cramps.

It was all the highschoolers from Alabang could muster. But fortunately for them, their collegiate counterparts from across the metro were off target after the first half.

Steph Permanes later admitted that tinkering with their formation has helped them find success.

“We changed our team formation. This week talaga all throughout training, we polished the movement of our new formation. So that [explains] the scoreline,” the UP coach said.

“Wala pa talaga kaming nakikita kung sino ang malalagay saan. We are still trying to figure out kung ano talaga ang best position for them, and best formation for the team. In the meantime, we hope they can work on their weaknesses like our game changers, our subs, sana they’ll do extra.”

UP finish their preseason in eighth place with 5 points, while Zobel and their 3 points have been banished to last. 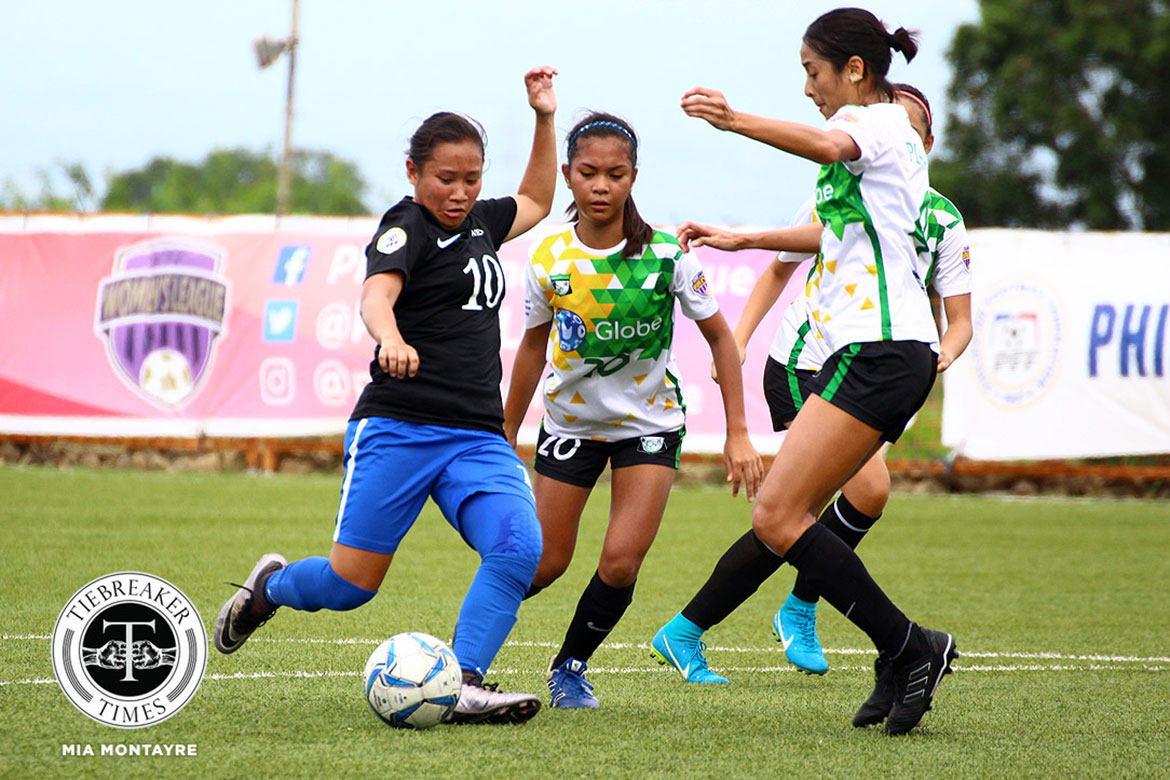 Cathy Cabrera opened scoring for the Katipunan-based squad in the 24th minute. She would go on to complete a hat-trick with a goal in the 52nd minute and a penalty in the 59th minute.

Rookie Therese Roxas netted a brace in the 26th and 45th minutes. Another rookie in Joannah Adao fired a beauty from long range in the 77th minute.

Ateneo later inserted players who were coming back from knee injurie,s and patterned their offense around them. The gamble paid off, as Bea Velasco contributed a 79th minute goal before Jill Panganiban added another in the 86th minute.

The Ateneo coach said they are not only adjusting for their players coming back from injury, but to the team as a whole.

The Lady Eagles’ win places them in sixth on the ladder with 13 points. GAU FC dropped to ninth with their 4 points. 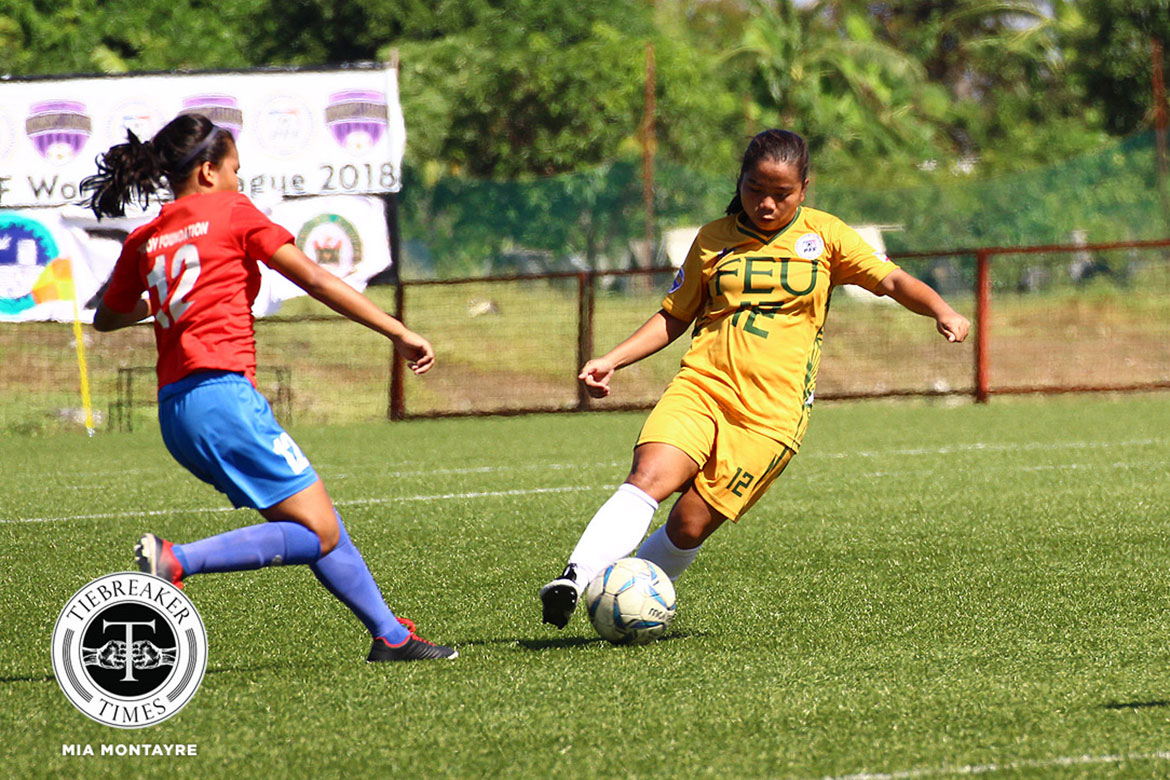 With third place on the line, Far Eastern University completed a comeback 3-2 victory after falling behind early against challengers Tuloy FC.

Tuloy looked intent on taking the second runner-up crown when they took advantage of a lazy FEU start, as Isabella Bandoja fired them into the lead with a dizzying 16th minute goal.

Bandoja’s pace was too much for her markers, as she netted another goal five minutes later, prompting coach Glaiza Artus to switch defenders on her. The move appeared to work, as veteran Suet Simoy gave Bandoja harder time to maneuver.

With Bandoja locked down, the Lady Tamaraws calmly worked their way towards taking the match back. Steady playmaker Jovelle Sudaria eyed Roselle Lecera in the box and drilled a pass to the striker for a 35th minute goal.

In first half stoppage, Sudaria lobbed a weighted shot from the corner, which a Tuloy defender ended up heading into their own net. With the match level at the half, the Morayta-based squad breathed a little easier but wanted to secure the victory.

Artus’ side found themselves in Tuloy’s area in the 80th minute, and Sudaria again was in the mix of things. She picked up a deflected pass before redirecting it to Mary Harriette Lam, who struck home FEU’s go-ahead goal and the win.

“We were down by two pero sabi ko sa kanila never give up. I know na kaya nila talunin yung Tuloy, just work as a team lang. So we just stopped the ball from the middle going to Bandoja, yun lang naman yung play ng Tuloy eh,” said Artus.

Taking over for head coach Let Dimzon, who was busy with national team duties overseas, Artus was happy to be able to manage in her stead and steer a team under pressure to victory.

FEU end their preseason with 19 points and in third place. Tuloy FC are right behindwith their 16 points.

Hiraya FC survive OutKast FC to stay in top half 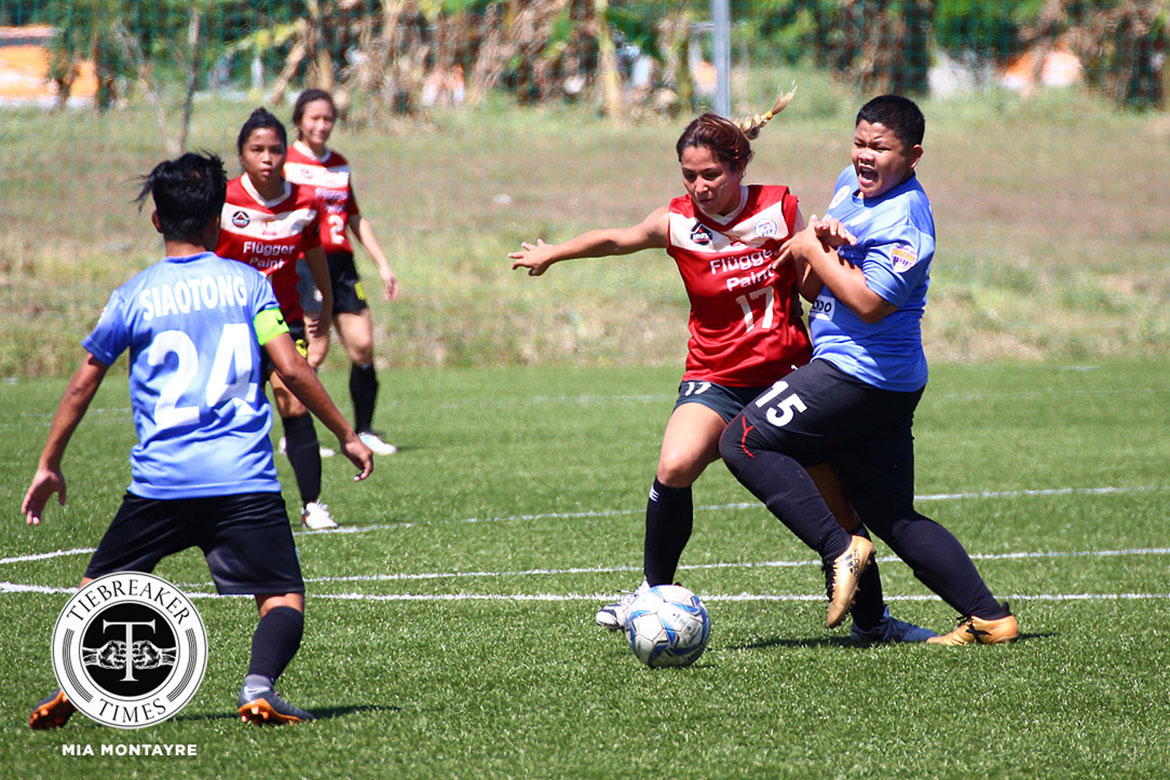 Hiraya FC were able to withstand a second half onslaught by OutKast FC to end the season with a 3-2 win.

Natasha Alquiros put Hiraya first on the board with a close-range strike in the 18th minute. Marice Magdolot doubled their lead with a minute to go before halftime, before adding another one six minutes after restart.

Suddenly OutKast came alive as Jennizel Cabalan pulled a goal back in the 55th minute. Sheila Ninobia’s strike twelve minutes later cut the deficit to one. However, Hiraya tightened their defense and managed to hold on for the win.

“We were lucky,” Philip Dinglasan later admitted. The Hiraya coach was aware that his bench was thin and that finishing the match would be tricky.

“We know conditioning and fitness is a problem for us. OutKast is a very strong offensive team and we’re lucky that we were able to score three goals early.”

The win allows Hiraya to finish the season in fifth place with 14 points, while OutKast are down to seventh with 10 points.

“I think this is a good consolation prize pa rin for us na we finished the league with a win and then we were fifth placed. Not a bad performance for us, though no progress pero at least hindi umatras,” Dinglasan smiled.

“What’s important for us right now is that we are all on the same page, and have that positive mind and knowing we can always progress for the next one.” 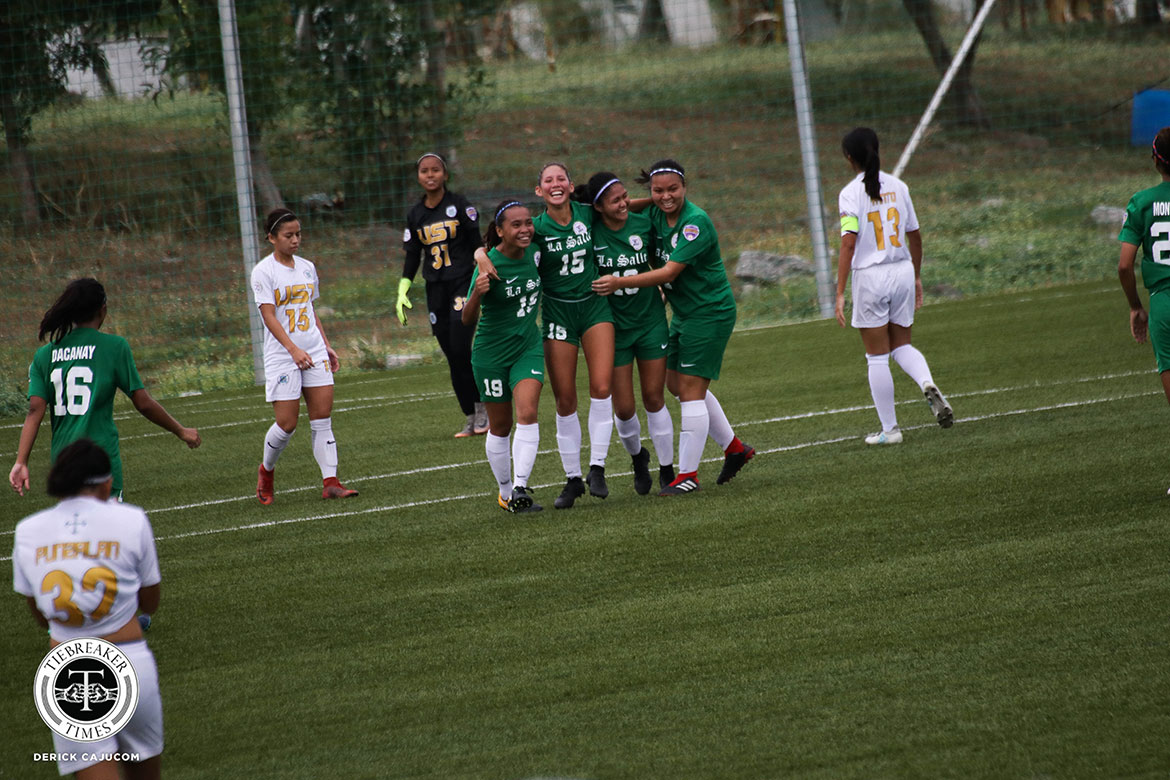 De La Salle University close out the second season of the PFF Women’s League with a decisive 2-1 victory over familiar rivals University of Santo Tomas.

DLSU drew blood first when Rocelle Mendaño’s pinpoint pass from one side to the other reached Carmen Castellano, whose flanking run led to a goal in the 15th minute.

In the 22nd minute, Janna Barcemo was tasked with a free kick from forty yards out. Her kick caused an awkward bounce on the ball that was too much for keeper Carmela Sacdalan to handle, and the Lady Archers found their insurance goal.

UST had several chances to get back into the game, but a Nina Yanto penalty in the 31st minute was thwarted by Natasha Lacson. The Tigresses eventually got their goal via Cecile Deita’s golazo, but it was too late at nearly full time.

The full points put DLSU’s 25 well beyond the reach of UST’s 21 points, which naturally awards the title – their second in a row – to the Lady Archers. It also means that DLSU have now denied UST a championship four straight times, after the latter always came in second in the last two seasons of both the UAAP and the PFFWL.

“The win is good, it’s a good boost for the girls. We defended it. Who would have thought after we were lacking players especially in our last game,” said Hans-Peter Smit.

The DLSU mentor thinks that his team are still far from ideal working order until he emphasized the team’s near perfect slate.

“The thing that I think we take pride in is we’re the only team that doesn’t have any loss. We just have one draw, no loss. So that’s what I’m proud of more,” he added. 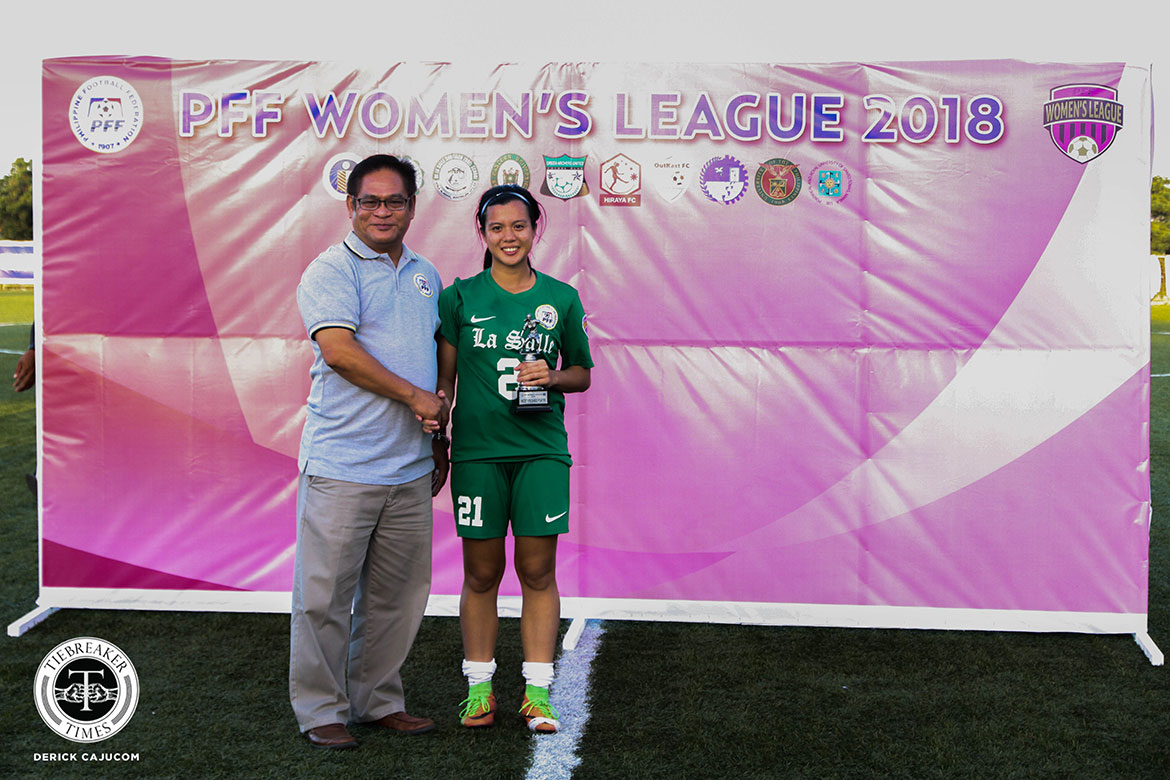 For the season awards, Tuloy FC were given the Fair Play Award. Their ace Isabella Bandoja took home the Golden Boot and Best Striker award after breaking two records this season (most goals in a single match with 11, and most goals scored in a single season with 24).

Hodges was surprised to receive the major accolade, but was just as happy and thankful.

The veteran was not always a defender for the Lady Archers, having been productive as a striker as well in past tournaments, and she doesn’t mind that her coaches keep changing her position.

“Para sa akin it’s about how you accept the roles given to you and how you deal with it. Kasi if pursigido ka naman maglaro or manalo, makakaya mo naman eh. It’s all in the mind lang.”