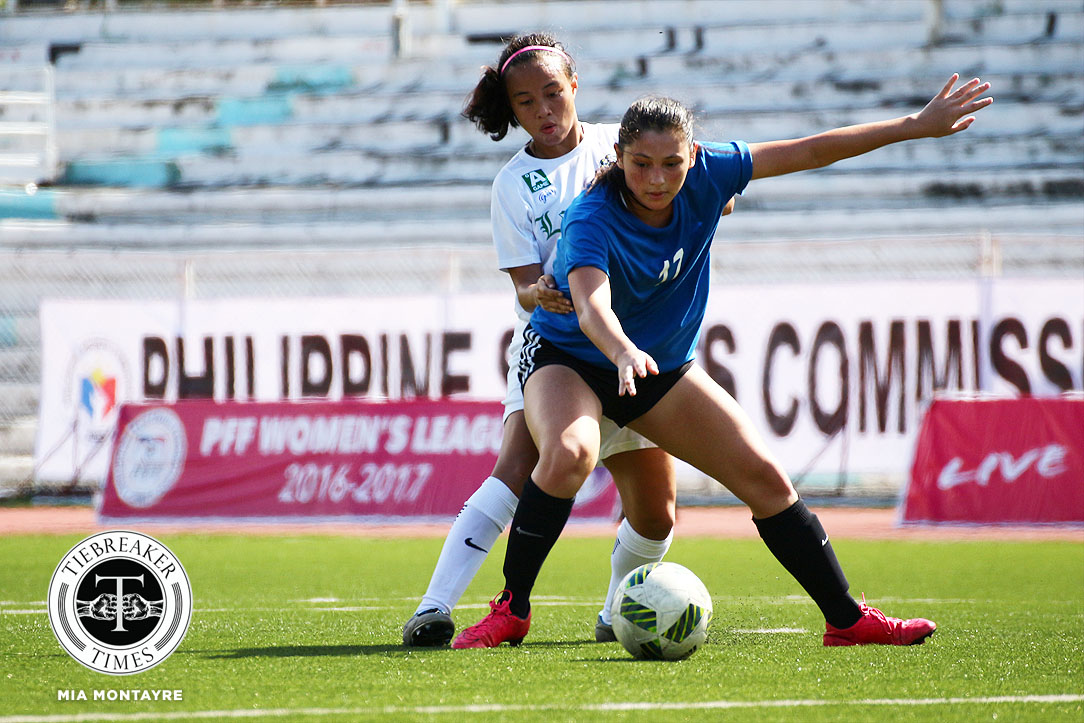 The PFF Women’s League resumed last weekend with four matches held in the afternoons at the PFF National Training Center in Carmona, Cavite.

The format slightly changed for the second round, with the ten teams randomly categorized to two groups where they play each other once. The league champion will still be determined by the most number of points after the total of thirteen matches have been played.

De La Salle University has practically won the league title after they opened the second round of the PFFWL with another win.

OutKast FC tried to keep the Lady Archers at bay for most of the first half until Kyla Inquig broke through in the 25th minute, flicking in a cross from the wings.

Anicka Castañeda, who has transferred from Green Archers United FC, doubled the score fourteen minutes into the second half after an Inquig assist.

Two minutes before full time, Janna Barcemo added in a third goal from way out to seal the win.
Kyra Dimaandal’s scoring streak comes to an end with this match but the new team captain is still very pleased with the outcome.

“It’s a great booster [especially] for our rookies that they can play with us [and] for the existing players to know that we can rely them. We’re rebuilding [so] we’re taking it step by step ,” she said.

Of her role, Dimaandal admits she is still learning the ropes.

“Before, I always wanted to be the very last person to come out the dugout; that made me feel safe knowing that I can rely on them. Now, I have to be the first one out and be aware that I have to lead.”

The Taft-based squad are on an impressive 19-0 unbeaten run from both the UAAP and the PFFWL, and its leading striker lets in on a secret to the team’s success: Coach Hans-Peter Smit.

“He’s a big factor in keeping us hungry for the title, keeps reminding us to stay grounded and know that this is a new challenge,” Dimaandal shared.

With 30 points already under their belts and the nearest opponent (Far Eastern University, currently with twenty points) only able to add a maximum of nine points in the three remaining games, the UAAP reigning champions have all but officially won the inaugural season.

Hiraya FC were looking to improve on their standings and were only too happy to comply against rivals Green Archers United FC with a 3-2 victory.

Much of the action happened in the second half where Hiraya were able to draw first blood through an Erika Casas pair. A pass from new big signing Cristina de los Reyes sent Casas on a run leading to a one-on-one with keeper Martie Plaza who she handily beat to put up a 61st minute goal. Casas scored her other goal seven minutes later off an assist from another transfer star, Cam Rodriguez.

Alisha Del Campo would respond with a brace of her own eight minutes later. A good cross put the ball in the young national team standout’s sights as she blasted from the top of the box to put GAU on the board. Del Campo doubled her output only four minutes later after outsmarting goalie Haya Ibarra.

With the match levelled, it took another national team standout to decide a winner, and it was none other than Rodriguez. Plaza blocked a Casas attempt but couldn’t hold on to the ball which was there for the taking by Rodriguez and the 87th minute goal clinched the victory for Hiraya.

For someone who made an instant impact with their new team, Rodriguez is naturally thrilled for Hiraya.

“I’m happy, we snagged the W through team effort and every person’s sheer determination to win,” she said, while refusing to get ahead of herself. “We’ll be taking it one game at a time, train in between to work on our team chemistry and fitness.”

“It helped me learn to constantly find ways to highlight my new teammates’ strengths, while still sticking to what I know and how I play the game.”

FEU holds on to second with win over Fuego Espanya

Far Eastern University continues to make up for their rocky start to the season, beginning their second round with a 3-0 win.

Joyce Onrubia continues to be a revelation for the Lady Tamaraws scoring a goal inside 10 minutes.

In the 32nd minute, a through pass from the left wing somehow reached Bia Requerme who slammed it home.

The fact that the Morayta-based squad could not come up with a goal in the second half was a cause for concern which captain Kim Cupal affirmed.

The ladies in yellow-and-green have joined the other teams in reinforcing their squad, and Cupal indicates that they are coming along well.

In a rematch of last UAAP season’s exciting and controversial playoff, it was the Ateneo de Manila University that suffered a heavy 7-1 defeat to University of Santo Tomas as the UAAP finalists close in on neighbors FEU in the standings.

The floodgates then officially opened after substitute Nathalie Absalon scored her first ever goal for UST in first half stoppage.

Battered but unbowed, Ateneo attempted to fight back after Tessa Bernardo’s free kick early in the second half put the Katipunan side on the scoresheet.

But Absalon seemed to single-handedly deny the ladies in blue any room for a comeback when she responded with her second goal a few minutes later. The rookie then completed her hat-trick in the 71st minute via a breakaway run.

Charisa Lemoran scored the Lady Tigresses’ seventh and final goal to cap off a lopsided victory over the Lady Eagles as they leapfrog over GAU FC to take third.

*UST student-athletes were unfortunately not made available for comment.

The PFF Women’s League continues this weekend in Carmona.