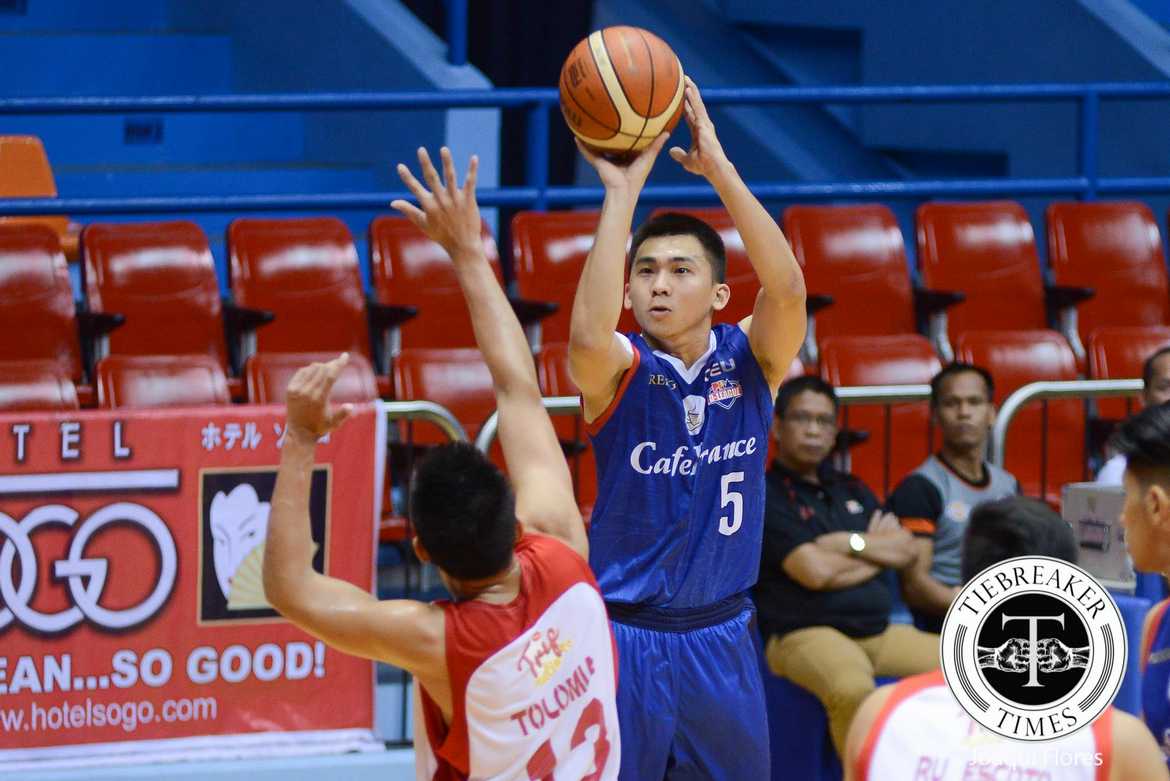 With reigning PBA D-League Aspirants Cup MVP Mac Belo and the Phoenix-Far Eastern University Accelerators breathing down their necks, the Café France-Centro Escolar University Bakers elder statesman Paul Zamar lifted his team on his shoulders in a 100-94 win to extend the 2016 PBA D-League Finals series to the limit, Tuesday afternoon at the Filoil Flying V Centre in San Juan City.

Both teams went on a nip-and-tuck affair in the first half of the games, as the two finalists could only muster a five point lead during the first 24 minutes of the game. Mike Tolomia scored 15 markers in the first half to keep the game close, but Paul Zamar and Samboy De Leon sparked an 8-0 rally to close out the second quarter and help give the Bakers a 47-44 lead to enter the break.

A triple by Roger Pogoy opened the second half and tied the ball game at 47-all. Through Carl Cruz and Samboy De Leon, the Bakers were able to stave off the FEU offense for a while, but the Accelerators duo of Belo and Tolomia tied things up at 57-all. However, costly fouls led to foul trouble for the Accelerators. A triple by Zamar gave the Bakers a 64-59 lead, while an 11-5 rally later on extended the Bakers lead to 11, 75-64, to enter the final frame.

The Bakers continued to ride on the momentum they gained late in the third canto, as they were able to extend their lead 83-70 with five minutes remaining in the game. Due to frustration, Ed Daquioag, who had been having a bad game, was called for a technical foul due to second motion against Zamar, that led to the 13-point lead.

Wanting to end the series right then and there, Belo carried his team on his shoulders in a furious 16-3 rally. Belo scored eight points during the rally, capping it with a three-point play that tied the ball game at 86-all with 3:30 remaining. But they also committed careless fouls, including fouling Tolomia, who was attempting a triple, and a breakaway foul by Cruz against Belo.

“The call of the referees, the flagrant foul on Bryan and the landing spot, it was six free throws. Dun sila nakahabol and they got the momentum. So I guess, breaks of the game,” Macaraya rued. “Sometimes, we have runs and they have runs also. Ang maganda lang is na-hold namin yung lead.”

The rally was broken after a bailout foul by Tolomia on Aaron Jeruta, but the slasher only split the two charities given to him. However, after the missed free throw, Congolese big man Rod Ebondo was able to secure the rebound and was fouled by Yutien Andrada, leading to two more freebies.

After two free throws by Belo cut the lead to just a solitary point once more, a costly turnover by Daquioag led to free throws for Zamar. Later on, after a miss by Tolomia, Zamar rushed to the other end of the floor and was able to score over RR Pogoy with the harm for a three-point play. Free throws by Jeruta later on extended the lead to eight once more, 96-88, with 57.5 ticks remaining.

A great play setup by Phoenix-FEU head coach Eric Gonzales led to a triple by Belo off a timeout. A miss by Zamar after gave the Accelerators a chance, but Ebondo was right there to clean up the miss. A charging foul was later called on Tolomia which did not help their cause, as the Bakers sent the series to a winner-take-all Game Five, 100-94.

“The kids showed character especially my three guards,” Macaraya said about the troika of Jeruta, Zamar, and JK Casino. “Kahit maliliit, they go for the rebound and they want to win this game.”

Paul Zamar tallied a game-high 25 points on 7/12 shooting from the field in 24 minutes of action. He said that being the veteran on the team, he needed to step up to win that elusive PBA D-League crown. “Wala na kasi kaming bukas. Isang talo out na kami,” he said. “As the oldest player in the team, I don’t want to let my team down.”

Rod Ebondo added 18 points and 13 boards, while Carl Cruz bounced back with 17 markers and eight boards.

Mike Tolomia scored a game-high 29 points on 10/19 shooting for the Accelerators. Mac Belo added 24 points and 15 boards in the loss.

The deciding game of the 2016 PBA D-League Aspirants Cup Finals is set to be played on Thursday, April 14 at the Ynares Sports Center in Pasig City.