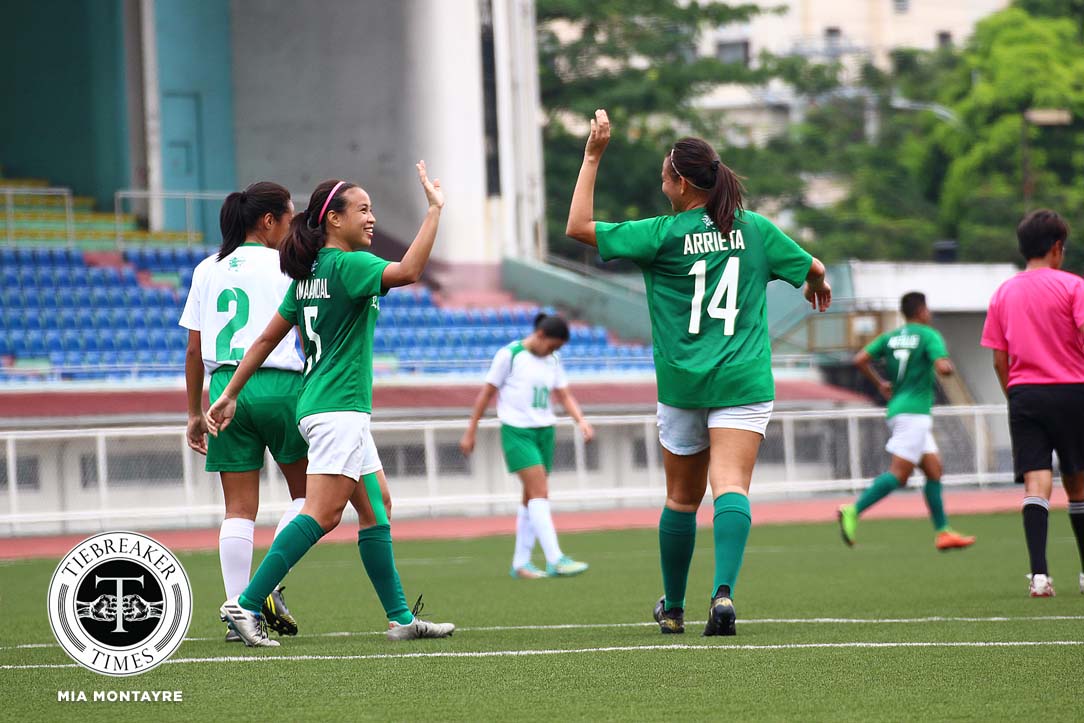 Far Eastern University have gone from the bottom half to second place after a five-game unbeaten run in which they won four and drew one. Their latest win came at the expense of the Younghusband FA, whom they blanked 6-0.

Joyce Onrubia got the ball rolling for FEU after she drilled a shot inside the box within the first 13 minutes. A minute later she doubled her output in almost the same fashion.

With the match passing the half-hour mark, a free kick situation led to Mary Lam whittling in a shot that was too tricky for TYFA keeper Francesca Rivilla to handle.

After halftime, the Lady Tamaraws continued the pressure, culminating in their fourth goal after 11 minutes, this time from Bia Requerme.

With nine minutes to go on the clock, Kaye Ysola scored the game’s final goal off another keeper error.

Coach Glaiza Artus was clearly pleased with how her team had ended the first part of the league.

Her side had some problems with finishing chances in their previous games, but she noted that there has been some improvement.

“Yung sabi ko sa kanila is they have to enjoy the game, we’re not about the score but the quality in the finishing,” she added.

The win cements FEU’s place in second of the league standings with 17 points, while TYFA are left in ninth place with 9 points.

The Ateneo de Manila University were the only team to play back-to-back games and they were halfway through a productive weekend after overcoming the resistance of Fuego Espanya with a 2-0 win.

Ateneo dominated the match from the get-go, but they clearly struggled to find their rhythm against Fuego Espanya. The club team looked determined to get a point from this match and resorted to bunkering down immediately, while keeper Diana Redondo turned herself into a wall that denied Ateneo’s close range efforts.

It took a 30-yard bomb from Pam Diaz at nearly halftime to break down Fuego Espanya’s defense, one that somehow grazed past the crossbar and Redondo’s outstretched mitts.

Ateneo doubled their lead in practically the same way, this time with a shot cracked by Tessa Bernardo from 18 yards at close to full time, with Redondo again at full stretch.

Coach Marigen Ariel attributed her side’s struggles to the team still getting into shape with their new players.

Ariel also agreed that Fuego Espanya’s defense coupled with her players’ impatience made things hard for the Katipunan-based squad.

Ateneo still had one match left to play but the outcome of the game put Fuego Espanya in last place with no points.

Ateneo nearly capped off a perfect weekend until a last gasp surge from OutKast FC denied them full points. The two teams were forced to share the spoils, putting them smack in the middle of the ladder with 14 points each, with the club team ahead on goal difference.

It was Ateneo who struck first when Bea Velasco’s through ball to Camille Rodriguez beat an offside trap inside the first five minutes. In the 31st minute, the defense literally collapsed when Rodriguez netted a brace after a pass from Martie Bautista led to a furious run.

The tides turned in the second half with a momentum shift that saw OutKast FC claw their way back into the game. This was most evident after a change-up put Outkast fullback Dai Dolino in attack instead, which unsettled Ateneo.

In the 76th minute, a handball inside the penalty area was called and it was Dolino who converted from the spot. It was also through her and from another spot kick that OutKast snagged the equalizer. A foul led to Dolino squaring up for a free kick from 40 yards out, which resulted in a shot on target that was too strong for goalie Moira Lim. This took place deep into injury time and was also the last play before the final whistle.

Ateneo mentor John Paul Merida revealed that while he was glad his team was still able to get a point from the match, he was happier that it revealed problems that needed to be worked on.

Merida also added that they did not expect to field Lim, one of their young new recruits, after primary keeper Kitkat Montelibano had to be stretchered off the field from cramps.

Ateneo look to improve on their ranking come second round but it would have to be after some significant changes and with players adjusting to the new formation. “Yung nine games talagang kailangan habulin na we need that every game makakuha namin palagi yung three points,” Merida added.

“It was a draw but it was like a victory especially like they were leading the whole game. I [also] see it as a victory in the sense that we are a club team,” she said. “Having a draw against Ateneo which is a varsity team for us is a big achievement because those guys they train every single day. We were two goals down so that’s even a bigger achievement.

“That’s the spirit of what we are. That’s what we say to the team: never surrender. I tell them if you’re going to give up now you might as well go to the bench. If you’re on the field, you go, go, go, you don’t give up.”

Smith’s team has been slipping down the standings for a while, so she is even more glad the match halted that.

“It’s good because it’s just before the end of the first round. So finishing on a draw is good, just even for the morale so that we you know, we’re still there, we can do it. And the fact that we beat a varsity team is quite encouraging,” she added.

The first round closed out with a marquee match between two of the top teams in the league, the De La Salle University and Green Archers United FC. The two teams not only know each other well, they also play the same system of renowned gaffer Hans-Peter Smit, and it was his collegiate team that prevailed 6-1.

It was actually GAU who drew first blood. In the 22nd minute, Marielle Benitez fired a shot from outside the box which DLSU keeper Erika Turtur seemed to handle at first, but she spilled it at the last second. Alisha Del Campo then put away the ball.

#ReadMore  St. Benilde coach Tang on FSAs: 'They got everybody on a higher level'

This appeared to have been the wake-up call for the league leaders, who had been playing sluggishly up to that point.

With five minutes to go to the half, Kyra Dimaandal’s one-touch shot of Irish Navaja’s pass leveled proceedings. Then in added time, Chelo Hodges scored the go-ahead from a Nina Arrieta cross.

At the game’s one hour mark, it was Arrieta’s turn to score by tapping in a loose ball inside the area.

Arrieta turned creator again in the 75th minute, after she drilled a through ball for Dimaandal that turned into an easy finish.

Five minutes later, the duo — who are both from Davao and have been playing together since childhood — clicked again for Arrieta’s brace.

Another five minutes later, Kyla Inquig capped La Salle’s furious comeback to put their sister team at third place (16 points). The win means DLSU have gone a perfect 9-out-of-9, thus sweeping the first round and with the maximum 27 points (which is also their goal difference advantage).

Smit, who is the coach of the Lady Archers but is also a mentor to GAU, was content with the outcome.

“I’m happy with the result. As you know GAU is my past and my future. So they’re still playing the same way as my team if you noticed in the first half. I knew naman that we would still come out victorious, we’re better fit especially with this weather. If it was a night game, it could be a different story,” he said.

Smit has said many times before that he wanted his side to sweep the first round because it puts the title within reach. “All you need to do is to put a distance between you and the next team. We need to separate from them. We need to further our distance from all the rest, from the pack,” he explained.

Looking forward, Smit believes his team still has the advantage despite the looming transfer window that allows teams to make changes to their roster.

“When the second round starts, teams will have more time to train together especially the clubs. I’m sure the clubs will be trying to recruit from the graduating players of the different UAAP teams. I don’t have that luxury. What I have is a luxury for myself, I prefer it that way: keep it close, so not too much of starting from scratch again. So, we still have an advantage,” he concluded.