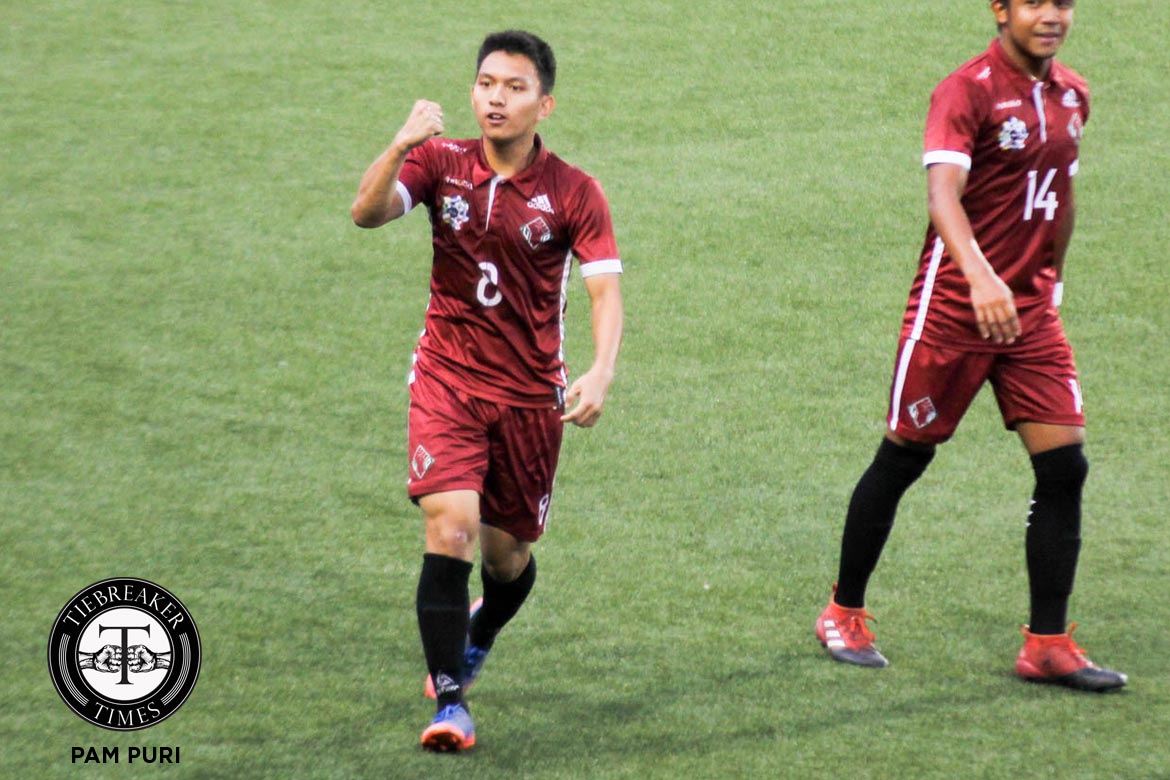 The University of the Philippines Fighting Maroons are into the post-season. However, the same cannot be said for the De La Salle University Green Archers; currently, their hopes are hanging by a thread as the defending champions handed La Salle a 2-1 loss, Sunday evening.

Kintaro Miyagi’s (63′) goal could very well prove to be the Sword of Damocles for the Green Archers this season as he and JB Borlongan (17′) provided the goals tonight at the Rizal Memorial Stadium in Manila. Rafael Siggaoat’s (21′) penalty wasn’t enough for La Salle to get the win.

“The first half was probably our worst this season,” commented UP coach Anto Gonzales. “We made a lot of unforced errors. We weren’t focused especially on our left side of defense. Really poor performance in the first half.”

A thrilling first half ensued between both teams. State U got the early lead in helpful circumstances. Fighting Maroons winger JB Borlongan unleashed a shot from the left flank that hit Green Archers defender Nicko Villacin’s head, and the ball ended up at the back of the net after 17 minutes.

La Salle, though, didn’t wait to answer back. Siggaoat forced his way into the State U box and drew a penalty after the referee spotted a handball. The rookie then stepped up to take the and directed it home in the 21st minute.

After the first half stalemate, it was the Green Archers who went close to breaking the deadlock. Marcus Garcia ran himself through on goal, only for an onrushing UP goalie Ace Villanueva to deny him.

That was La Salle’s best chance to seize the momentum as the State U defense readily dealt with Garcia and the rest of the Green Archers offense time and time again. After 63 minutes of play, the Fighting Maroons clinched the game-changer.

State U skipper Daniel Gadia powered his way through midfield and passed the ball towards a well-positioned Miyagi, who calmly scored past La Salle goalie Kerbi Almonte. Gonzales shared, “It was a good play. That’s what you can expect from Gadia, the extra pass. King said he will score today.”

The Fighting Maroons controlled the game from that moment onward, as the Green Archers were left to pounce on scraps. The experience of the defending champions was evident in how they managed to repel every La Salle attack and seamlessly transition into the opposing end.

Borlongan could have sealed all three points late in the match, but Almonte was on hand to deny him. Nevertheless, UP won the hard-fought contest 2-1, in what was a further blow to La Salle’s Final Four aspirations.

“I think in the second half there were incremental improvements. We kept the ball better. We made less unforced errors,” explained Gonzales.

UP (28 points) shall finish the elimination round against the National University April 20, 9:00 AM, at Ateneo de Manila University’s Moro Lorenzo Field, while La Salle (15 points) will face league leaders Ateneo on April 9, 5:00 PM at Rizal Memorial.