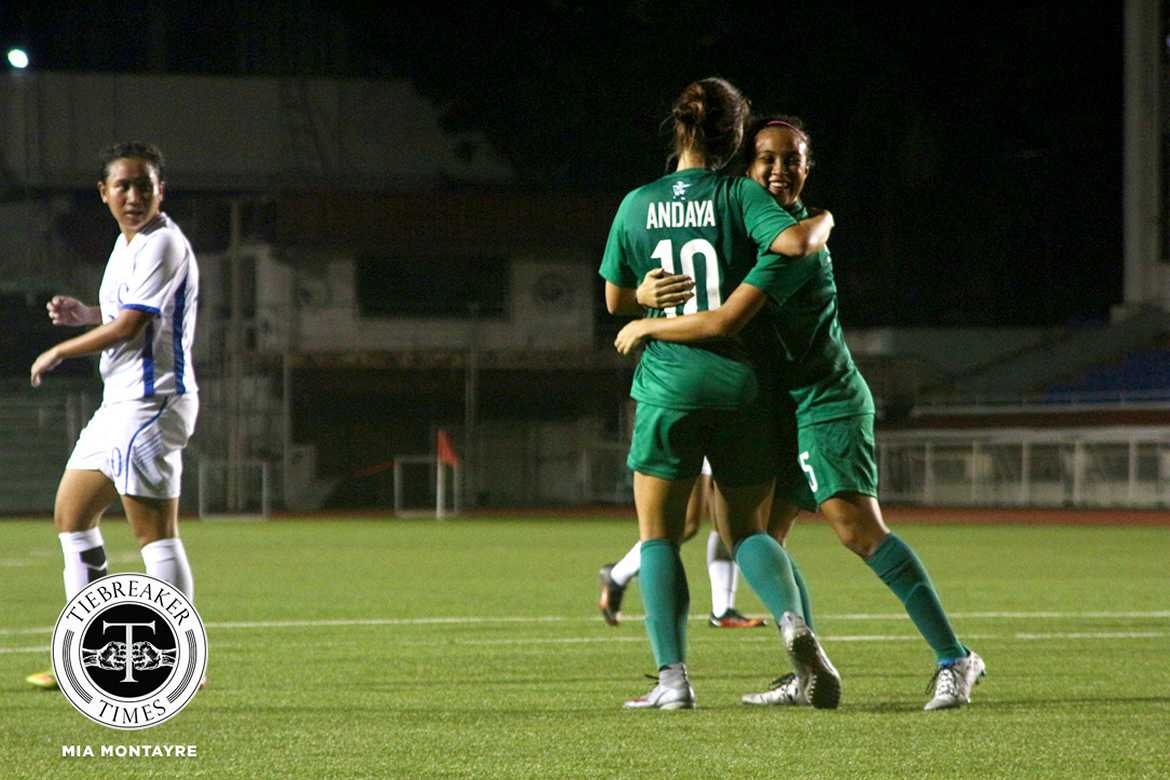 The University of Santo Tomas Lady Booters had little difficulty controlling the game last Saturday, never allowing Kaya FC to settle in the opening half.

Set off by a three minute goal from Jan Christelle Cleofe, UST capitalized on errors committed by the much younger team.

Charisa Lemoran went on a scoring spree six minutes later, completing a hat-trick within 12 minutes then adding a fourth goal at the stroke of halftime. In between, Hazel Lustan squeezed one in at half-hour mark.

Kaya managed to regroup with some plucky advances once play resumed in the second half. Fourteen minutes in, their efforts were rewarded with a penalty, which 15-year-old and national youth team member Glynnes Dela Cruz duly converted.

UST’s response was swift, with Cleofe doubling her tally four minutes later, and Lemoran adding a fifth two minutes after that.

Lemoran later revealed that scoring 5 goals in a single game was a personal achievement. “Masaya siyempre, big achievement,” Lemoran said of her feat.

UST have had a dream start to the league, as they sit at the top of the table with 6 points and a +14 goal difference, but coach Aging Rubio shrugged it off, pointing out the importance of execution rather than blowouts of inexperienced clubs.

On the other hand, Kaya FC’s mentor, Steve Nicholls, was very pleased of his team’s performance in the second half.

“We made changes and the girls came out fighting. They put a great performance in the end, it was only [1-2]. So they did their jobs for me, it was good and important that they did that.”

It seemed like a routine game for the University of the Philippines Lady Maroons, but horror struck just five minutes into the match.

Out of nowhere, the youngest player on the field opened the scoring for OutKast FC, as 16-year-old Lindsay Whaley’s left-footed strike hit the back of the net.

UP were determined to counterattack, only for their offensive runs to disintegrate under the rock-solid backline reinforced by Captain Mea Bernal in her first appearance in the league.

An own goal in the 74th minute made matters worse for the UAAP champions, as they surrendered an unlikely win to the recently-formed club.

“It’s really exciting, I didn’t expect it since UP is a really strong team and are UAAP champions. So I was surprised myself but I’m happy about it,” commented Whaley after the game. Whaley has been a constant feature in the UFL youth circuit, and was also a key part of the U-14 team that won silver medals in an AFC tournament in 2014.

When asked how they had been able to orchestrate what can be considered an upset, OutKast FC coach Rhea Penales said it had a lot to do with better preparation and with entering small tournaments during the league break.

Not happy to find himself and his team on the wrong end of the upset, UP tactician Andres Gonzales pointed out what went wrong.

“I thought we played poorly in the first half, it didn’t match their fight, I thought we were intimidated. In terms of physicality hindi kami nakasabay. Then we gave them so much space especially in the midfield to operate so they were able to control the game. Second half, I thought we did better in denying them space. I thought we controlled the game better although we could have been more composed with the ball when we had it,” Gonzales said.

He also revealed his team is currently undergoing a rebuilding process, with so many of his usual key players missing because of injuries and various commitments.

“[We’re a] young team and with more games hopefully mag-improve yung composure and decision-making. It’s difficult because sort of rebuilding process siya, but it also serves as a chance for the others to step up,” Gonzales added.

The trend of youngsters scoring for their club teams continued on Sunday, with 17-year-old Alisha Del Campo pulling off no less than a hat-trick.

The De La Salle-Zobel standout opened the scoring in the 10th and 23rd minutes, linking up with teammates Jill Panganiban and Mai Martinez from the flanks. Her third goal was thanks to a headed pass, which she finished off 8 minutes into the second half.

Fellow high school standout Anicka Castañeda chipped in a goal in the 76th minute after beating the defenders while inside the box to cap off GAU’s first win.

“So overwhelming, ’cause like for me it was – I think it’s impossible to score that hat-trick in this game but with the help of my team I got to score,” said Del Campo, who also revealed her exploits in the game have been her best personal achievement to date.

His counterpart on Hiraya FC, John Philip Dinglasan, attributed their loss to lack of proper training and poor player attendance.

“Our problem now is coming into the games that’s the only time that we can think and plan what we would like to do. Unlike the other teams like for example today we were playing against GAU and they already train weekly and a lot of their players have chemistry already,” Dinglasan said.

“I really think they got the best of us today because our lineup was also quite shallow. A lot of our players can’t make it and again, no training. [But] of course we cannot make excuses for losing.”

The Younghusband FA scored a goal in each half to become the second team apart from GAU to overturn a first game loss and put up 3 points on the table.

Karen Ladero made the most out of an opponent’s poor clearance during a set-piece and fired a shot on goal 15 minutes in. Later, Marielle Sutacio drove in TYFA’s second on a breakaway fifteen minutes after halftime.

To make sure the team lasted 90 minutes, Leyble came up with a game plan to conserve his team’s stamina.

Leyble also devised TYFA’s assurance goal by placing Sutacio from back to front. “Yung second half nag-adjust ako dahil walang finishing yung first half namin. Some player I put to the striker because she has good finishing also. Si Marielle, and nag-work naman.”

Fuego Espanya forward Marga Bellosillo spoke on behalf of her team and shared that her team was actually satisfied with their performance.

“As in we were surprised. Parang it was a good game naman compared to the last one, we were able to hold them,” Bellosillo confessed.

The clear marquee match-up of the week – fueled by a decades-old rivalry between their respective institutions – was the Manila Clasico between the Ateneo de Manila University and De La Salle University. However, the match did not live up to expectations – except for fans of the team decked in green.

Kyra Dimaandal put the Lady Archers ahead, slotting a cross from Irish Navaja into the bottom corner after 8 minutes.

Ateneo attempted to respond, and the action went back and forth between the two sides, before a through-ball from Kyla Inquig gifted Dimaandal her second for La Salle right before the halftime whistle.

Nicole Andaya tripled the Taft squad’s lead in the 68th minute, and things went downhill for their Katipunan counterparts from there.
Dimaandal completed a hat-trick six minutes later off a back pass from Inquig.

Then Inquig herself joined the scoring spree, firing one in seven minutes later. She again assisted Dimaandal’s fourth and final goal for La Salle, five minutes before full time.

After the game, Dimaandal spoke highly of her team. “My performance was great because my teammates also worked very hard. Being a striker, you can’t bring it all–you can’t do all the goals by yourself. Most of the time it’s just you finishing off what your teammates worked hard for,” she expounded.

Dimaandal also confirmed that this was her best performance to date. “Yeah, for 11-a-side, that’s the most goals [I’ve scored] and surprisingly it’s against my old alma mater but I’m representing La Salle now,” she confessed while still hopeful for an even better one.

Her coach Hans-Peter Smit believes she could have scored more had she not flubbed them. “They will learn, I just hope that sometimes. They lose concentration eh, they lose focus on what they’re supposed to do, how they’re supposed to take the shots, and all that. But, I’ll take it anytime,” he said.

Even with such a high-scoring win, Smit was not satisfied.

“You know I’m never that satisfied. Good win, more than the win, it’s the performance of the [secondary] players, the way they played as a team. They did well because I had to make changes with the positions to compensate for the loss of the other players. It’s not just putting one player in a certain position, it’s how you train as a team and everybody understanding each other’s roles,” he clarified.

The DLSU mentor also seemed to understand what Ateneo is going through. “Saying all this, Ateneo is a relatively new team. Young, they’ll learn. And it’s [their] first game.”

Merida also revealed that studying for finals week has hindered his players’ training schedule, but said it would not be right to make excuses, especially looking ahead at their next games.

The PFF Women’s League continues this coming weekend beginning with UP facing Fuego Espanya at 2:00 P.M. followed by OutKast FC versus Green Archers United FC at 4:30 P.M. on December 10.