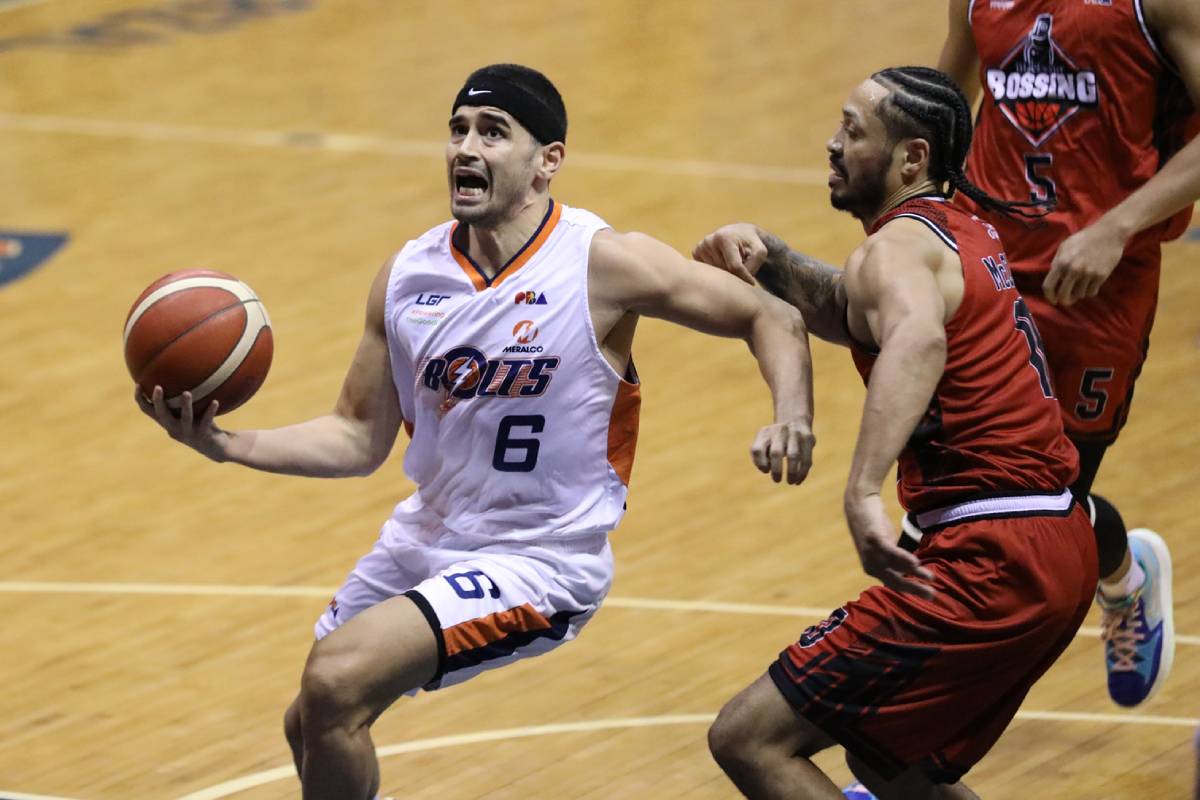 ANTIPOLO – KJ McDaniels did it all on both ends of the floor as Meralco escaped Blackwater in overtime, 102-98, for back-to-back wins in the 2022-23 PBA Commissioner’s Cup, Friday night at the Ynares Center here.

The former NBA cager finished with a full line of 26 points, 16 rebounds, five assists, a steal, and a block, coming up with the biggest plays in extra time to help the Bolts avert disaster after losing a 13-point lead in regulation.

He prevented Barkley Ebona from breaking the 96-all deadlock with a big block, then dished the assist that led to Allein Maliksi’s go-ahead triple with 27.5 seconds left before icing the game through a split with about five ticks left.

“He’s just a very smart player, very solid player,” lauded head coach Norman Black. “Players have a lot of confidence in him so that’s why we have uplifted our level of play in these last couple of games, even if it’s very difficult.

“But at the same time, right now, all the wins that we could get are very important,” added the champion bench tactician.

Aaron Black also had a hand in the extra period on the way to finishing with 18 points. Chris Banchero tallied 17 points on 70-percent shooting, while Maliksi and Bong Quinto supplied 16 and 12 markers, respectively.

This is now the first winning streak of Meralco in the conference. It is coming off a big 92-89 win versus guest team Bay Area the last time out.

The Bolts slightly rose in the standings with a 3-5 card, and are hoping to keep their winning ways against TNT on Wednesday, November 16, at the SMART Araneta Coliseum in McDaniels’ first meeting with his ex-team.

#ReadMore  PATAFA, Obiena camp yet to respond to PSC agreement

“I just want us to play good basketball. I just look at some of the teams in the league and they’re really playing good basketball, offensively and defensively, so we wanna match that play,” said Black.

Meanwhile, Cameron Krutwig had 23 points and 19 rebounds for the free-falling Blackwater, who fell to its fourth loss in a row and dropped to 3-7.

The defeat wasted as well the young guns’ efforts. Ato Ular contributed 15 points and 13 rebounds for yet another double-double; former Bolt Trevis Jackson scored 14, while Mike Ayonayon chipped in 11 markers.

Gab Banal supplied 14 points for the Bossing, who will next take on the streaking Ginebra next Friday, November 18, also at the Big Dome.