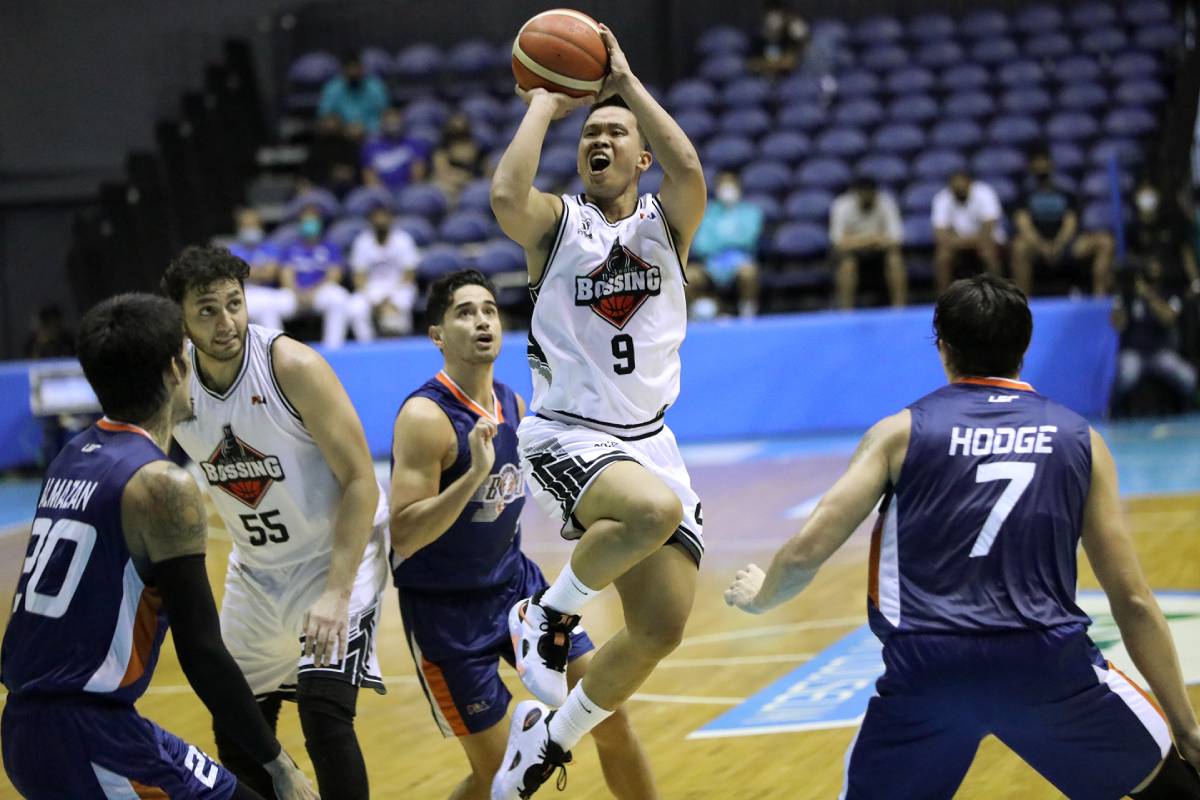 Baser Amer put his former team to sleep as Blackwater caught another big fish in Meralco, 90-89, to extend its winning streak to three in the 2022 PBA Philippine Cup, Thursday night at the SMART Araneta Coliseum.

The former Bolts star sank the go-ahead bucket off the glass with 1.7 seconds left before hitting the ‘night night’ taunt, as he saved the Bossing from a meltdown after blowing a 10-point lead they built with 5:28 remaining.

Just 2-of-10 from the field prior, the newlywed finished with six points, three assists, and two rebounds as his side got their fourth win in five games.

“I told Baser before the game, ‘Baser this will be your game. Tatalunin mo dati mong team.’ And he delivered,” said coach Ariel Vanguardia. “I told him this is a game you’re gonna win for us. It took a former Meralco player to beat them.”

Ato Ular was stellar yet again as the rookie finished with 19 points and 15 rebounds. JVee Casio fired 19 points as well, as the two played big roles in the final seconds that enabled Blackwater to stay at par with the Bolts.

Ular cleaned up Yousef Taha’s miss inside to tie the game at 85 with 49.5 seconds to go, while Casio nailed a big trey as a response to Chris Newsome’s perfect trip to the line to give his side the 88-87 lead with 14.1 ticks to play.

Rey Suerte made 15 points, while Rashawn McCarthy added 12 markers as the Bossing gained a share of the second spot of the standings with Ginebra.

“Really nothing to celebrate,” said Vanguardia as he wants his team to stay grounded. “I don’t think we have entered the playoffs yet. We need probably two more victories to assure us a playoffs spot. It’s gonna be a tough July.”

The win also served as a fitting welcome to top overall pick Brandon Ganuelas-Rosser, who finally made his debut after weeks of delay due to a fractured finger. He finished with eight points in 11 minutes of play.

“Brandon will be better,” Vanguardia said. “Wala siya sa timing. It’s my fault. I apologize to my team, early in the second half he struggled and the team struggled. Pero kailangan ko yun para sa confidence niya.”

Blackwater will look to extend its Philippine Cup-best start to four straight wins against Phoenix on Friday, July 8, 3 p.m. also at the Big Dome.

Newsome led Meralco with 23 points, including the fadeaway jumper that gave the Bolts the 89-88 lead with 6.5 seconds left only to be negated by his former backcourt partner. He also had six rebounds and six assists.

The Bolts fell to their second loss in a row and are now toting a 3-3 record. They hope to get back on track quickly against another struggling team in Rain or Shine (1-5) on Wednesday, July 6, at 3 p.m. still in Araneta.