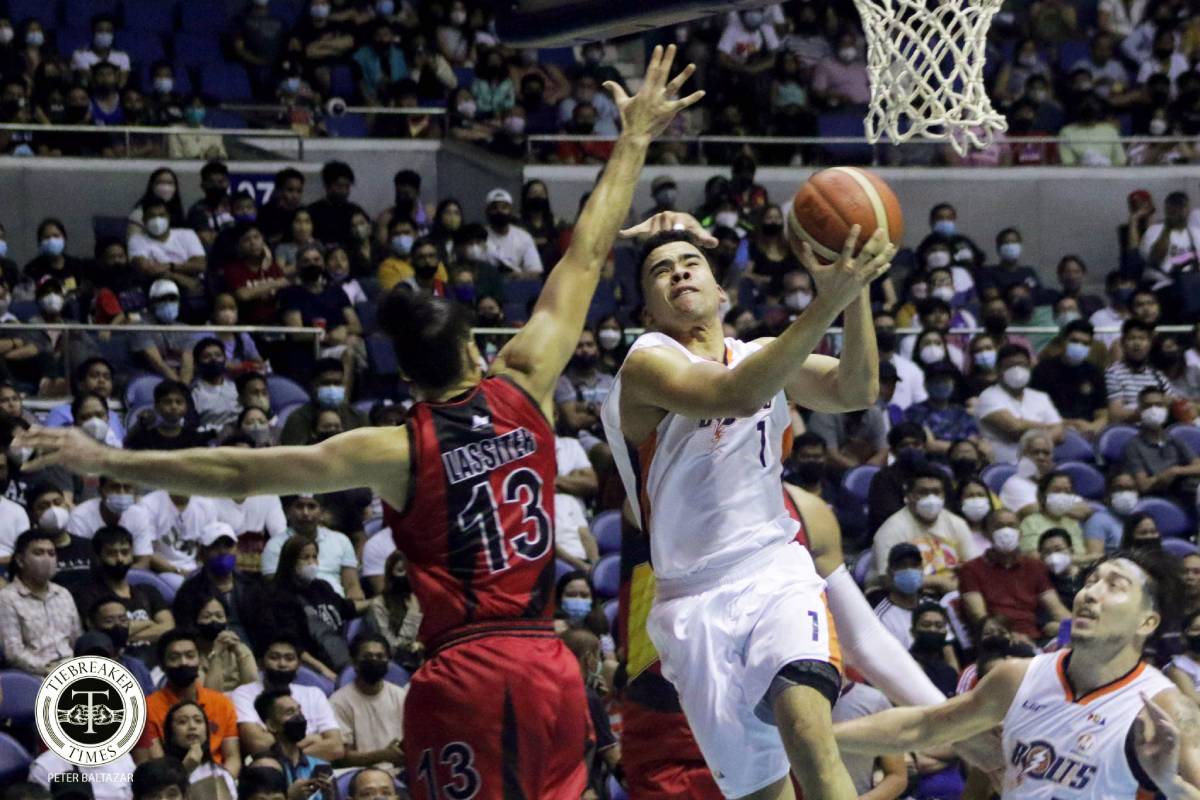 Aaron Black took over down the stretch and towed Meralco to a come-from-behind 96-92 win over San Miguel to force a Game Seven in the 2022 PBA Philippine Cup semifinals, Sunday night at the SMART Araneta Coliseum.

Quiet in the previous match, the 25-year-old scored the Bolts’ last 11 points, including eight consecutive to power the telling 13-0 run that erased a 10-point deficit and gave them a 93-90 lead with 31.5 seconds remaining.

He also provided the much-needed stability for his side in the dying seconds, going 3-of-4 in separate trips to the free throw line to put the Beermen out once and for all after the latter came within a solitary point.

Black finished with 17 points on a 44-percent clip from the field, on top of five rebounds and six assists in 29 minutes.

“I’m really proud of Aaron, not just ’cause of tonight but where he’s come from as a basketball player,” said coach Norman Black. “I think he’s improved a lot over the past couple of years, and his career has been on the upward path.”

“I’m happy he took over the game today. He actually told me, ‘Give me the ball and set pick-and-rolls and I’ll get it done,’ and he went out and did it, so I’m really happy he was able to back up what he was saying out there.”

Chris Newsome top-scored for Meralco with 19 points and seven rebounds. Cliff Hodge had 17 points and 12 rebounds, while Chris Banchero added 13 points on three treys as they sparked the rally before Black’s take-over.

#ReadMore  Black preps Meralco for Pringle: 'Probably the best player in the league'

“San Miguel is a tough team. Credit to them. They had us in a hole the whole game, and I’m just thankful that we were able to come together as a team and come out with the win,” said the younger Black.

Meanwhile, June Mar Fajardo tallied 23 points and 13 rebounds to lead San Miguel, who actually led by as much as 16 points in the second period.

The Beermen actually had a chance to tie the game at 93-all with 8.3 seconds left, but CJ Perez missed the second of his three free throws, much to his disappointment when his team huddled on the bench.

SMB tried one last time to send the game into a deadlock but Chris Ross; touchdown pass wasn’t caught by Jericho Cruz. Black got the ball and was quickly fouled, leading to the game-sealing freebies.

Game Seven is on Wednesday at the Big Dome.