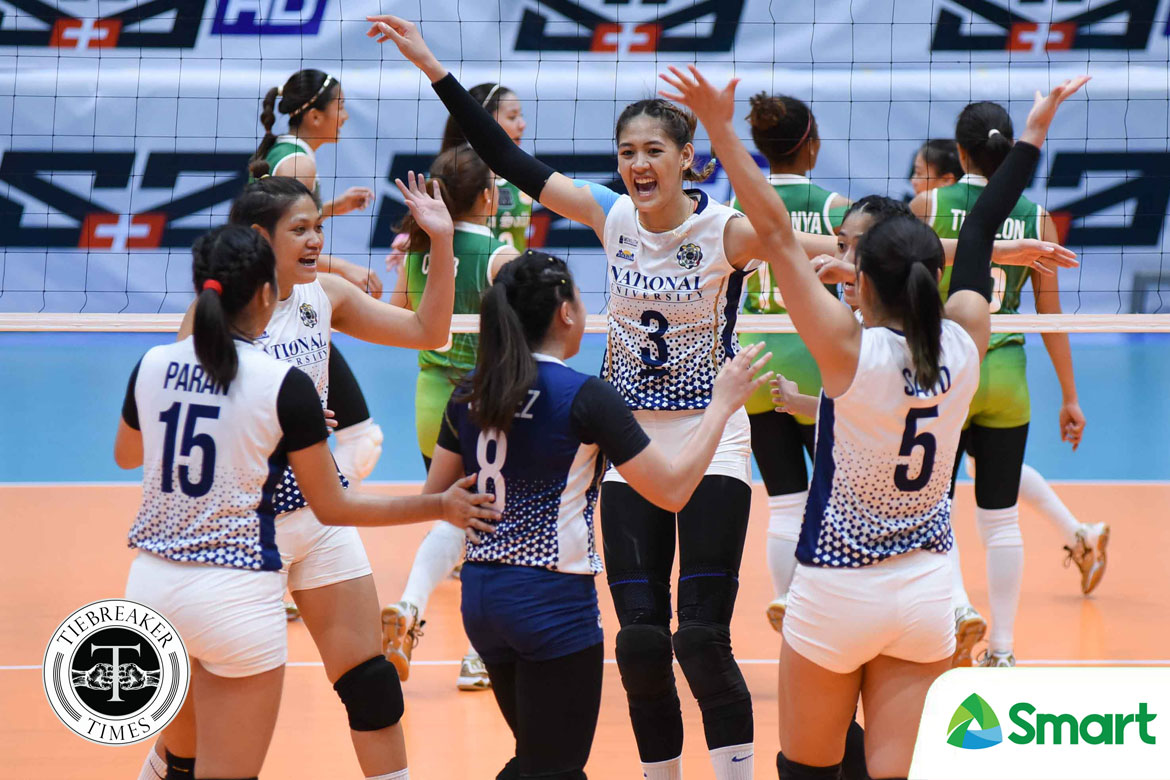 In a battle between two remaining undefeated squads in the UAAP Women’s Volleyball Tournament, the National University Lady Bulldogs emerged as the only team unscathed in a scintillating five-set match against defending champions De La Salle University Lady Spikers, 26-24, 19-25, 22-25, 25-17, 16-14, Sunday in the Filoil Flying V Centre.

Both squads engaged in a neck-and-neck battle, but it was the Lady Bulldogs’ desire to break the Lady Spikers’ systematic play that propelled them to a 4-0 record.

In the opening set, from 23-18, the Lady Bulldogs survived a late run by the Lady Spikers sparked by a clever off-speed attack courtesy of Arianne Layug, followed by three consecutive service aces from Michelle Cobb, to advance to 23-22. Risa Sato, Aiko Urdas, and Roselyn Doria stopped the bleeding and took care of the last three points to seal the first set, 26-24.

The nip-and-tuck tempo of the match continued in the second set, as both teams were tied at 19-all. NU’s defense collapsed afterwards, as La Salle cruised to six unanswered points, 25-19, equalizing the match at one set apiece.

Jaja Santiago clawed back for the Lady Bulldogs in the third set, killing every set given to her by Jasmine Nabor. However, several producers chipping in for La Salle — Majoy Baron, Kianna Dy, Desiree Cheng, Layug, and May Luna — assured a two set advantage, 25-22, for the ladies in green.

#ReadMore  Risa Sato vows to do better in academics, volleyball

With the desire to force a decisive set, the Lady Bulldogs’ sense of urgency kicked in and they dominated the fourth set. After securing an early lead of 11-6, NU did not look back and took home their second set, sealed with a Nabor service ace, 25-17.

During the fifth set, La Salle secured a 10-7 lead. Castillo called a timeout and eventually managed to tie the set at 12-all. It was La Salle head coach Ramil De Jesus’ turn to regroup, but by the time they returned, the Lady Bulldogs were unstoppable. Santiago pushed NU to match point with a raging cross court attack, but Luna answered with her version through NU blockers to advance to 14-all. With Santiago in the middle, she attacked once again to break the tie for another match point. Urdas closed the exciting match with a service ace, 16-14.

Sato added 15 markers, while Urdas and Paran chipped in 10 points each.

Luna created 12 points, while Baron and Dy chipped in 11 markers each for La Salle.