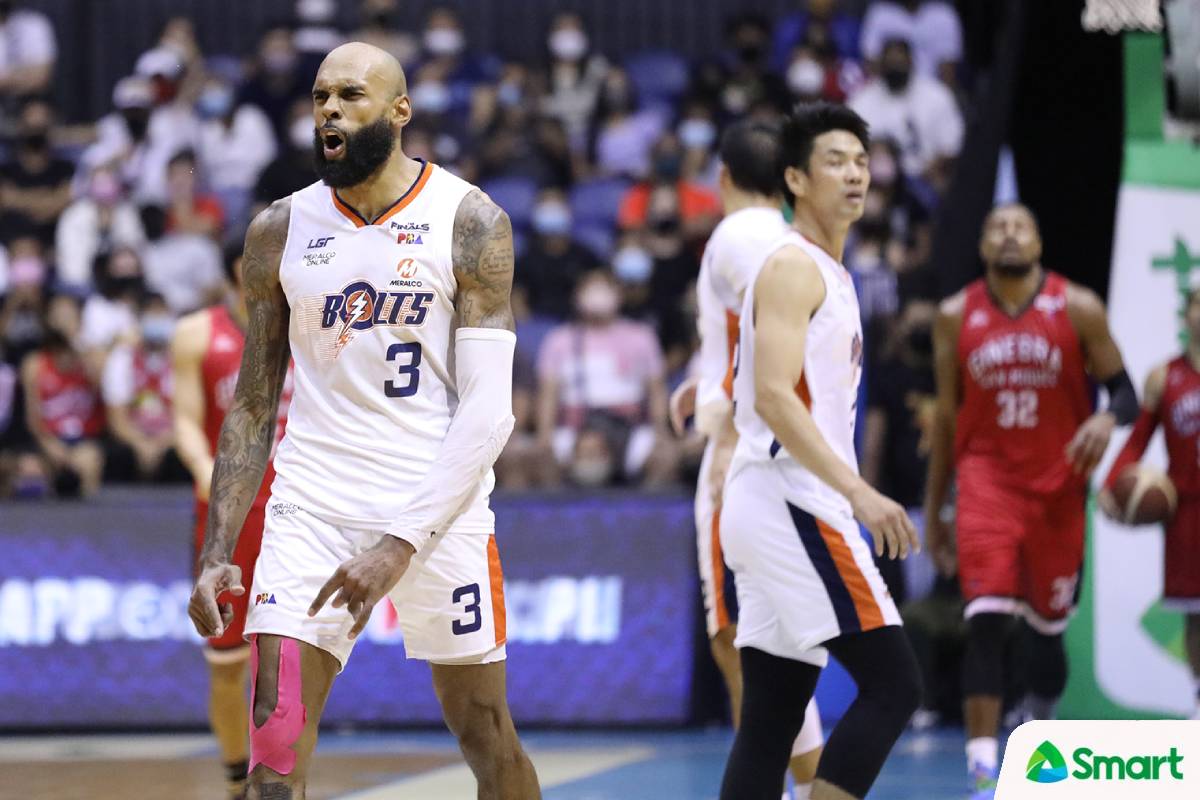 Meralco head coach Norman Black remained defiant even after witnessing his side fall into a precarious position in the 2021-22 PBA Governors’ Cup.

The Bolts bowed to Ginebra via a 115-110 decision in Game Five on Sunday night, their second straight loss after taking a 2-1 lead in the best-of-seven series — quite a deja vu for a team raring to end what’s been a curse of sorts.

“It takes four wins to win the championship. They’ve only won three games,” he said moments after the match at the SMART Araneta Coliseum.

“I’m not giving up, my players aren’t giving up. We still have a chance at tying the series.”

Meralco did have a chance to steal the Barangay’s thunder when it stormed back from 14 points down and got to within just one with less than five minutes left. But, the opposition’s firepower proved to be too much to handle.

Christian Standhardinger and Scottie Thompson connived for the dowsing 7-0 run, with the latter draining a three-pointer from deep that was actually the team’s 16th of the game, equaling the franchise’s all-time record.

All in all, the Gin Kings made 51-percent of their shots from the field. And a team that shot that well isn’t easy to beat, conceded Black.

“An amazing shooting game by Ginebra. I thought there were a lot of times that we played decent defense, but they were still able to knock down their threes. And it’s hard to beat a team that shoots like they shot tonight,” he said.

“We actually fought back in the game, but it wasn’t enough,” Black added, as his wards’ rally fell short again just like in the previous game.

The champion mentor also lamented the lowly production of Tony Bishop in the first half, where he went scoreless in the opening period — his very first scoreless quarter in the finals — before scoring four in the following frame.

Still, they were able to lead by four multiple times in that half despite the Panamanian being quiet, but weren’t able to sustain that. Jeff Chan and newly-crowned Best Import Justin Brownlee led a Kings run for the lead.

Bishop made up for it in the second half, which saw him lead that fourth quarter assault that, unfortunately, didn’t lead to a victory. He ended up with 30 points on five triples and 15 rebounds to lead the way for the Bolts.

“He’s our import and he only scored four points in the first half. It’s a little bit difficult for the locals to make up for that amount, especially when you’re going up against Justin — and you know Justin’s going to be very productive.

“We struggled a little bit in the first half because of maybe the lack of production from Tony,” said Black. “But, he tried to make up for it in the second half.”

Then again, as tough as the loss was, Black remains confident with their chances in Game Six on Wednesday, though it’s not lost on him the matters they need to address in the days heading into that all-important affair.

“We’ll work hard the next couple of days to try and fix some of our mistakes. And obviously, rotation on defense is really, really important because we just seem to be one rotation late a lot of times today against the offense of Ginebra. So really we have to work on that. But, hey, they only have three wins. We win on Wednesday, we tie the series,” said the Grand Slam-winning bench tactician.