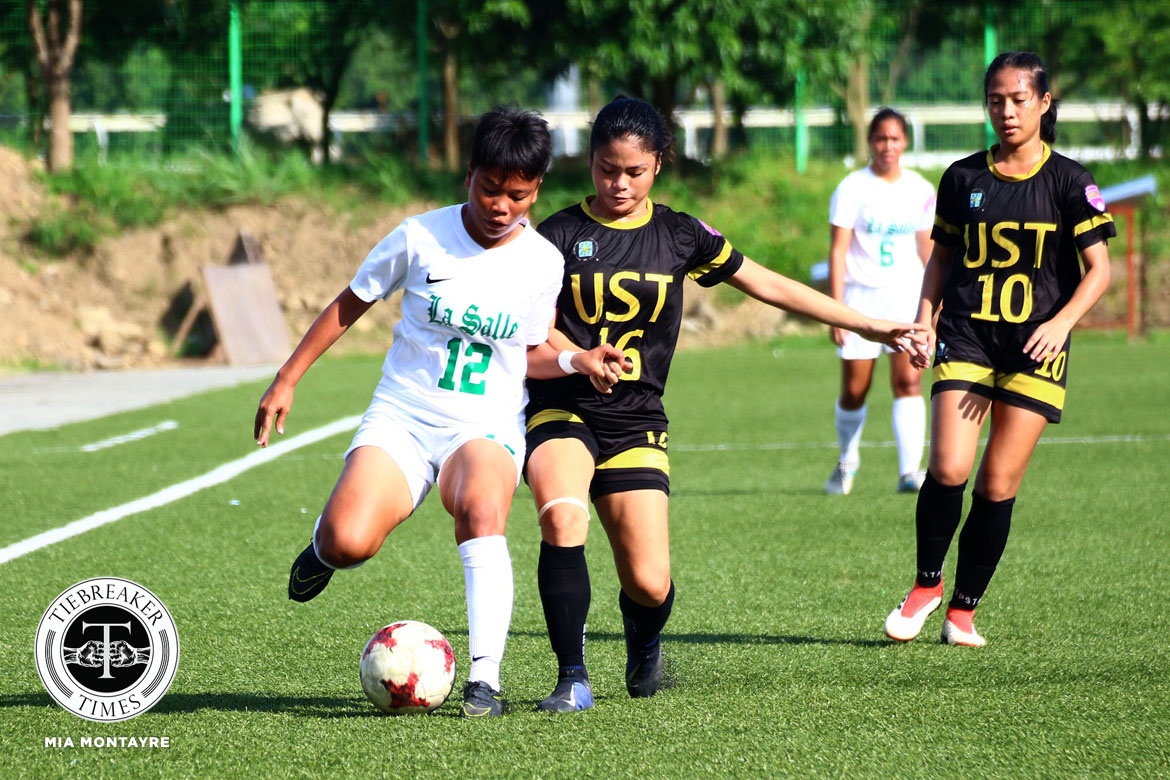 The De La Salle University gained a six-point lead over University of Santo Tomas to sit atop the PFF Women’s League standings, last weekend at the PFF Training Center in Cavite.

The University of Santo Tomas nearly came back from three goals down, but the De La Salle University clung on to win the battle, 3-2, between the league’s current best two teams.

La Salle started off well, getting a chokehold on the first half with Sara Castañeda’s clever free-kick goal setting the tone early in the 11th minute. Alisha Del Campo and Angelica Teves then racked up the scoreline in the 31st and 42nd minutes. But leads such as this can prove to be dangerous to a team, something coach Hans-Peter Smit was very wary of.

Sure enough, the second half was a different story. UST snapped out of their daze and worked to hold DLSU scoreless the rest of the way. Their offense also started to click, as Shelah Mae Cadag forced her way through La Salle’s defense to knock in goals in the 75th and 90th minutes.

It was a short-lived comeback, however, as time ran out. DLSU hung on for another win, but it was still something that did not sit well with Smit.

“Fine, we’re still on top, nice to keep the record, but we’re still a ways off. Even if we’re leading by ten, and then the other side scores one goal… It doesn’t matter if it’s UST, regardless of who we are playing against, when we’re ahead, we cannot relax. We need to put the pressure on pa rin. That’s the mentality that I want to instill on the players, it will only augment well for them in the long run not just for La Salle lang.” 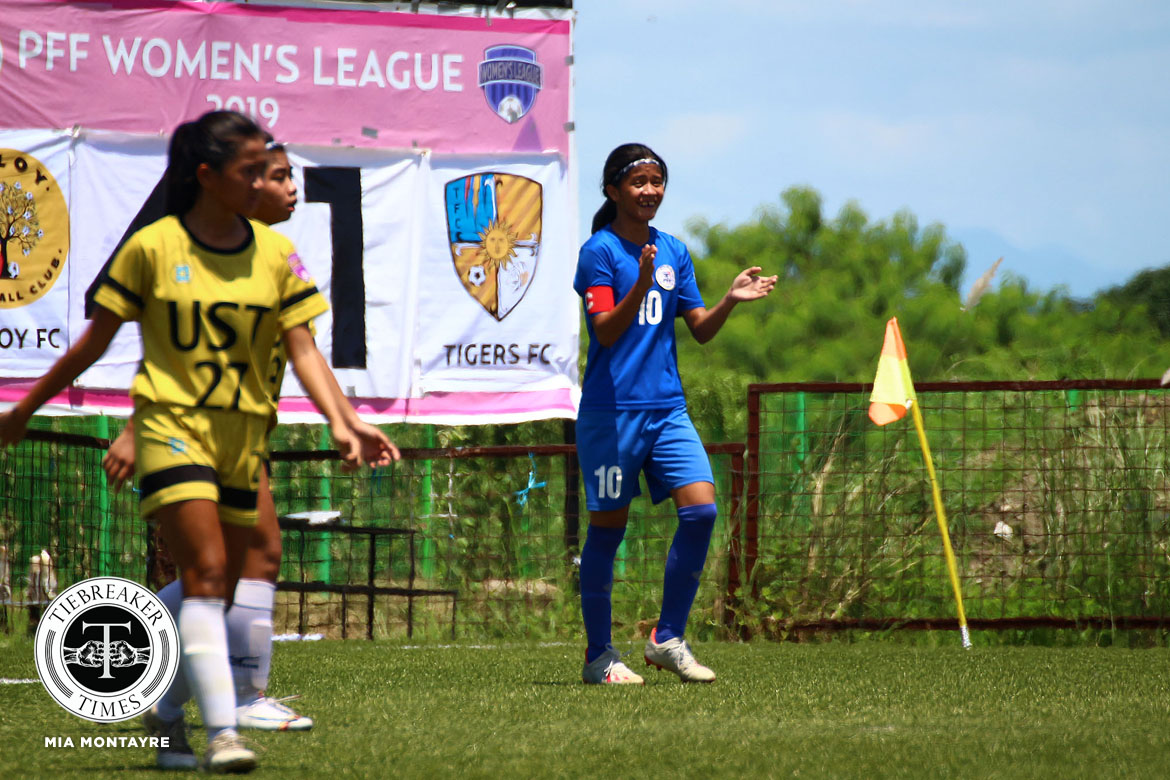 After their promising start to their second season spiraled into a nosedive, Tuloy FC turned things around by doing away with bottom-dwellers Tigers FC, 4-1.

Tuloy were in uncharted territory, having lost more matches than they were used to, and appeared to be wavering in their match against the Tigers. It took most of the first half before Isabella Bandoja decided to take charge. She baited the Tigers’ defenders before releasing a pass to Jenny Perez, who finally put Tuloy on the board in stoppage time.

Four minutes after play restarted, Jonalyn Lucban doubled their lead before Lovely Fernandez pulled it back in the 55th minute. Bandoja, though, was having none of it. The captain responded with a pair of goals in the 58th and 71st minutes en route to Tuloy’s first win in four matches. 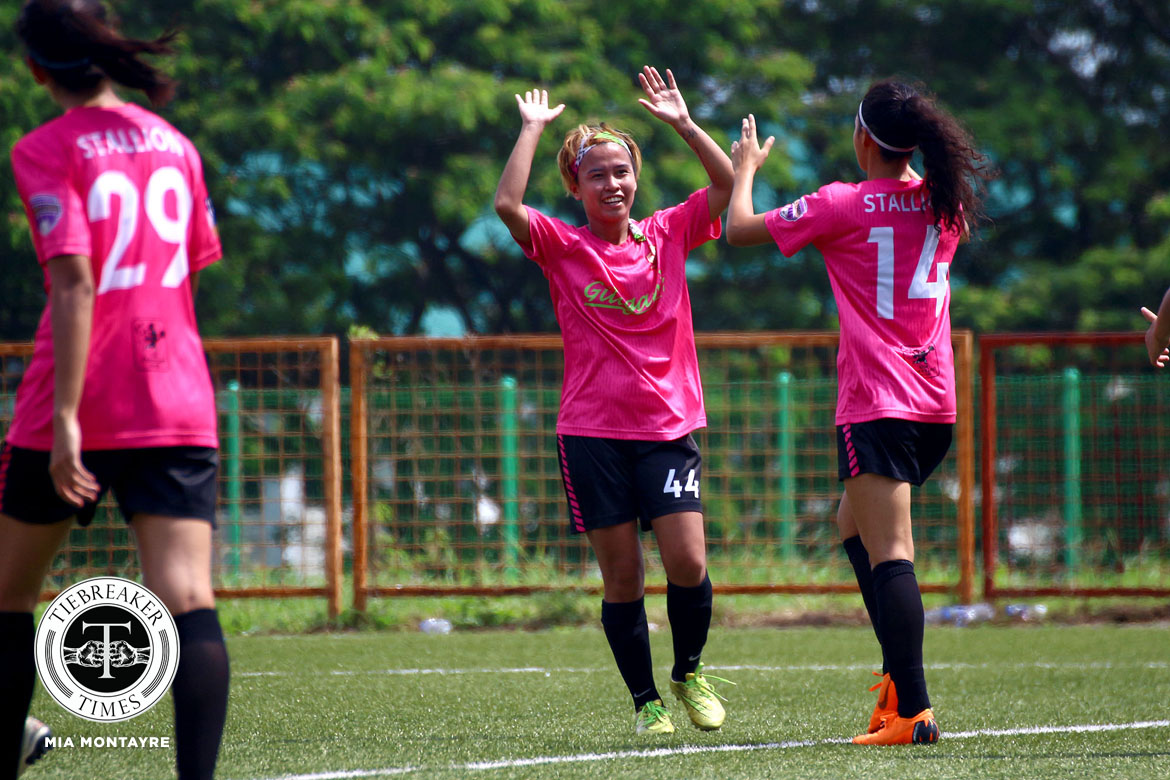 Postponed due to severe weather, Maroons FC and Stallion-Hiraya FC finally settled their match, with the latter escaping on a 1-0 victory.

Most of the match had already been played last August 3, which finished as a scoreless affair thanks to heavy rains and puddles on the field hindering play. Ultimately, the match was put on hold and made to resume only last Sunday with thirty minutes left to play.

After six minutes, it was Stallion-Hiraya who broke the deadlock thanks to a combination play inside the box. Martie Bautista and Marianne Narciso teamed up, with the latter scoring officially in the match’s 66th minute.

The Maroons struggled to get into the game, having to resort to numerous player substitutions that ultimately did nothing as the Makati-based club snatched their fourth straight victory.

“We were lucky na what we were doing in the warm-ups was exactly how the goal happened. It’s good that we’re on a momentum kasi maririnig mo dun sa mga players na they have a positive attitude. They know that they’re on a winning streak so yung mindset nila maganda kasi they know they can,” said coach Philip Dinglasan.

The tricky match had to be played virtually under the same conditions as the cancelled game, which Dinglasan revealed was something that was not easy.

The PFF Women’s League continues on Saturday, October 5 at the PFF National Football Center with De La Salle University kicking things off with Tuloy FC at 8:00 A.M. followed by the University of Santo Tomas taking on Stallion-Hiraya FC at 10:00 A.M.

On Sunday, October 6, the University of the Philippines will face Tigers FC at 8:00 A.M before the Green Archers United FC will clash with Maroons FC at 10:00 A.M.