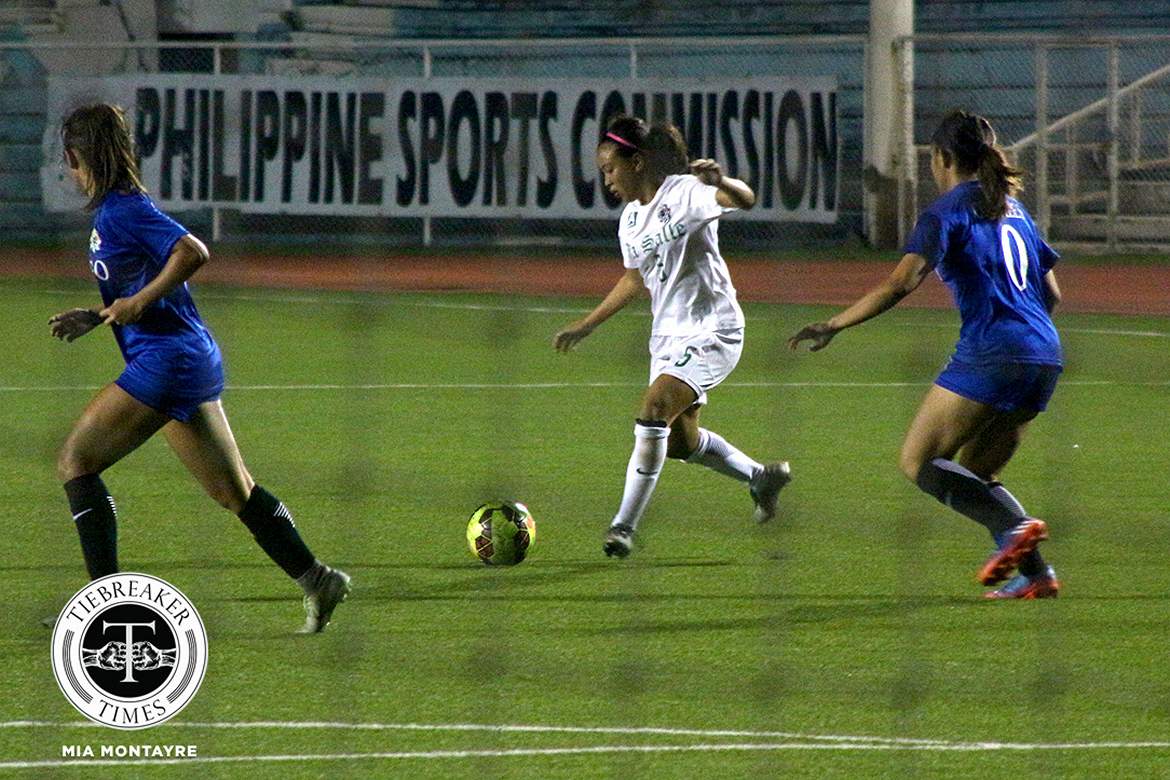 Kyra Dimaandal (41′), Nicole Andaya (55′), and Irish Navaja (68′) provided the goals for the Lady Archers tonight at the Rizal Memorial Stadium in Manila.

“I just hope na tuloy-tuloy na ito,” explained La Salle mentor Hans-Peter Smit. “I’m just a little wary of my team’s injuries. I have a lot of injuries even now. The girls have showed a lot more heart.”

Both Ateneo and La Salle had a solid showing in the first half. The two squads played attacking football and goals were bound to come in this contest. It was Ateneo who threatened to score early in the game, but La Salle goalie Inna Palacios made a routine stop versus Tiffany Siy.

The Lady Eagles and Lady Archers traded blows as if it were a heavyweight boxing match. La Salle came closest, as Sara Castañeda saw her header palmed away by Ateneo goalie Marie Caparros and another shot denied by the crossbar.

It took until the 41st minute for the game’s deadlock to be broken. Dimaandal rebounded Kyla Inquig’s deflected shot into the back of the net to draw first blood for La Salle. Inquig could have doubled La Salle’s cushion if not for another routine Caparros stop.

The Taft-based school carried with them a precarious 1-0 lead at the break, and much more was needed from the Lady Archers if they wanted to secure the game in the second period.

Upon the game’s resumption in the second half, the contest became a one-way street in favor of the Green and White. Caparros produced another fine save against Inquig, only for the ball to land at Andaya’s feet for a simple tap-in in the 55th minute.

La Salle continued to pound at the Katipunan’s school goal as they sought to follow Smit’s instructions to the letter. The Lady Archers didn’t drop their intensity throughout the game, and Navaja sealed the game in the 68th minute when she looped the ball into the Lady Eagles’ net.

The game ended La Salle 3-0 Ateneo, in what was a good win for the Lady Archers. The result gives La Salle their third win, while handing Ateneo their first loss.

“Against FEU we need to score early. FEU is still a dangerous team no matter what. All the teams in the UAAP are very dangerous. UAAP now is all balanced. We’ll see what happens,” concluded Smit.