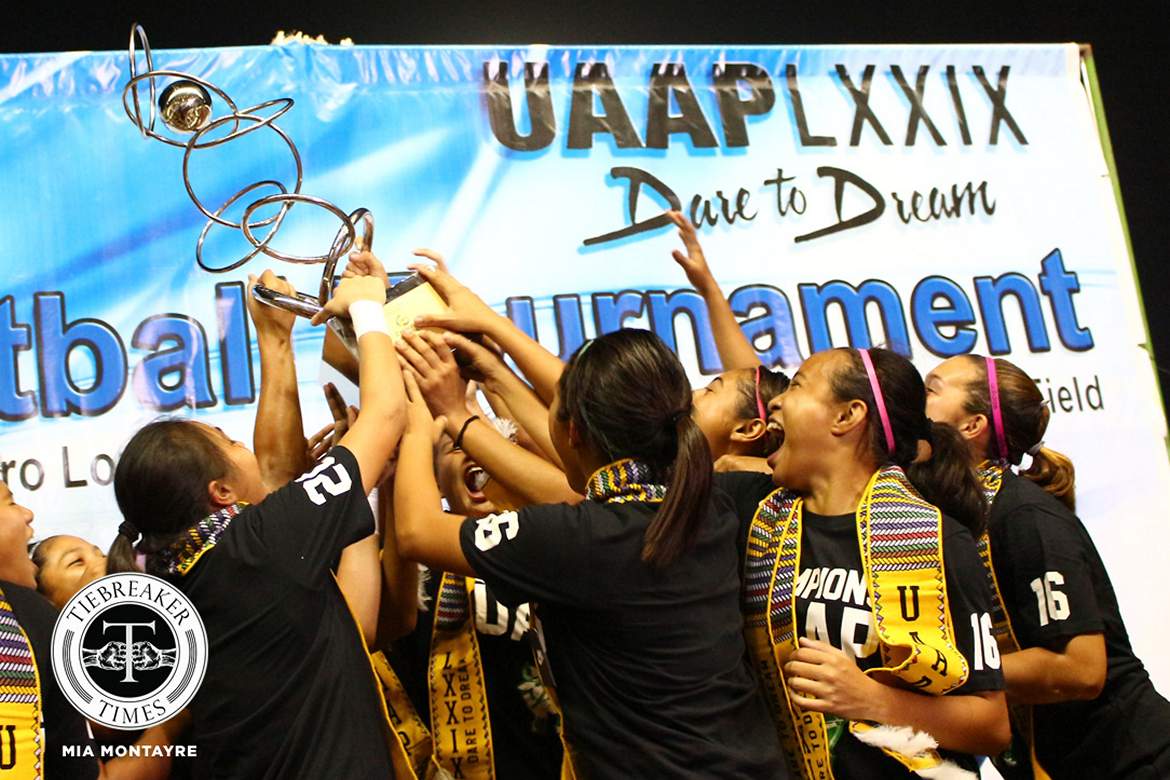 It was a perfect ending to La Salle’s dominant run this season. Coach Hans-Peter Smit’s team stayed unscathed in all of their games to rack up a 100 percent record of nine wins in as many games. It’s an impressive feat that not a lot of champion teams have achieved in recent history, so it does not come as a surprise that the extraordinary team also almost swept the individual awards.

Graduating goalkeeper Inna Palacios and batch mate Regine Metillo picked up the best goalkeeper and best defender awards, a fitting conclusion to the UAAP careers of both players, especially after they led a sturdy defense that only conceded six goals from start to finish.

Sara Castañeda and Kyla Inquig also received recognition for their consistent displays as Best Midfielder and Most Valuable Player respectively. Last but not the least, Kyra Dimaandal emerged as the season’s best striker after finishing the season with 11 goals.

Overcoming a haunting past

On paper, it seemed that the DLSU women’s football team’s road to glory had been smooth sailing. However, the student-athletes faced several challenges in order to finally reclaim a title they had last won in 2010, one of which was having to learn from last year’s mistakes.

“We had to pinpoint every mistake that we had. One of the mistakes that we had last year was that we did not have the right attitude in the game.

“This year we were able to overcome all our mistakes. We listened to coach’s instructions. We trusted him,” Dimaandal shared.

Last time around, La Salle had also cruised their way into the final before missing out on the grand prize when they were beaten by the University of the Philippines.

A year older and wiser, the ladies from Taft regrouped, and had already shown signs of resurgence when they took the PFF Women’s League by storm. Before the league took a pause for the UAAP, DLSU had recorded six wins in as many games. Few already thought, including opponents, that it was a sign of more things to come from last year’s beaten finalists.

Yet after the disastrous finish to Season 78, the La Sallians weren’t willing to take any chances. As much as going top of the standings for the second year in a row is fulfilling, it also puts them in an eerily uncomfortable position.

“There’s a lot of pressure when you’re at the top just like last year,” stated Castañeda, the scorer of the game’s winning goal.

One for the seniors

Not a lot of teams are given the \chance to redeem themselves in a final after losing the previous one, so when they earned it, the Lady Archers showed sheer determination to send their seniors out with a bang. Unlike last year, when no one departed from the squad, seven players will no longer return to defend the title in Season 80.

“Last year, I promised them that we would be champions this year. I really wanted to give them that,” Dimaandal confessed after the game. Her goal had given La Salle the lead early in the second half, but it was later cancelled out by UST’s Hazel Lustan.

After that moment, La Salle were tested. Even after the equalizer, UST looked more confident with the ball, and it wasn’t looking good for the team that had reached the final without losing a game in the elimination round. At that point, the ladies showed great character.

“When they scored I saw everyone was down because it came from a counter attack which we were practicing for two weeks. I knew that we had to pick up ourselves. One goal at a time,” the UAAP Season 79 top scorer narrated.

True to their promise, the Lady Archers put up a strong finish to the game, as players began to feel tired in what was a thrilling encounter. National team members Irish Navaja and Castañeda linked up like they usually do to decode the Tigresses’ defense again and retake the lead for good.

When asked what they thought about winning the individual accolades, no one admitted to prioritizing them. For each one of them, the feat is a result of varying factors geared towards a collective objective.

Inquig, awarded the MVP trophy, hadn’t expected to bag the honors at all. In awe, she humbly said,

As for Dimaandal, she too hadn’t set out to win the best striker award. She dedicated the award to her coach Smit, who motivated her, along with others in the team, to win individual honors.

“My teammates were the one who helped me get this award and I share this award with them because it’s not only me and I really have to thank coach Hans [Smit] for pushing me,” she added.

Castañeda, who has won the award for the second year in the row, also chose to deflect credit to her teammates, as she cited that her individual accomplishment stems from the team’s success.

Although it is still too early to think about next season, the girls are looking ahead ahead with optimism. Acknowledging the departure of a talented senior batch, Inquig knows that there are big boots to be filled if they are to defend the crown.

The midfielder — who looks up to superstar Cristiano Ronaldo — spoke confidently about what lies ahead on the horizon.

Dimaandal is also positive that the team still has a lot to offer in the coming seasons, especially if they stick with the same mindset they’ve had throughout Season 79.

“I hope next year that we will be able to push ourselves even more because I know this team can still do better. This is not yet our top game,” the Biology major professed.

A better La Salle team to come after this perfect season is a terrifying prospect for the competition, as they might need to double, if not match, the Lady Archers’ efforts in order to experience the same heights the next time around.