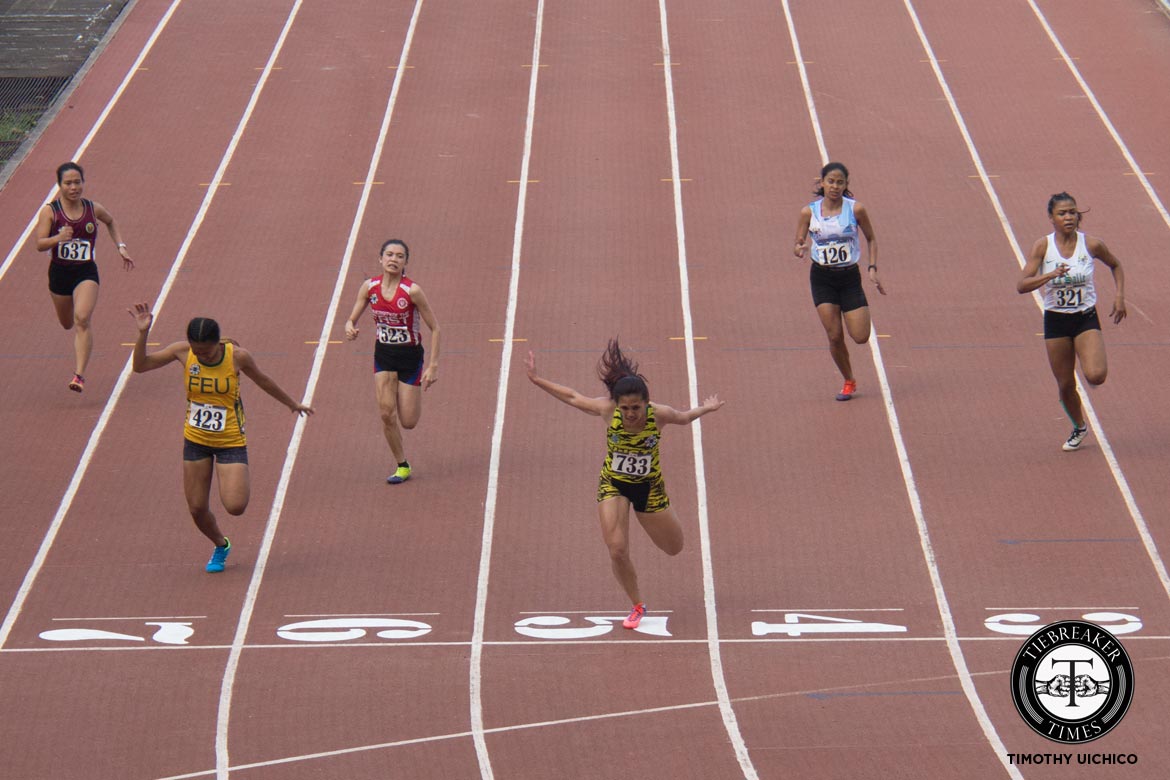 The University of Santo Tomas led the medal tally for day one well ahead of the Far Eastern University and the University of the Philippines. If UST shows dominance in day 2, this may set-up a momentum for another title defense come Sunday night.

Despite the efforts of other universities to take away points and opportunities for UST to capitalize on, UST is still dominant enough to slowly pull away from the competition.

Much like the 100m dash during day 1, the 200m dash for day 2 was also filled with familiar names.

Last season, UST got a gold-silver-bronze medal finish for the 200m consisting of Karen Janario, Michelle Loterte, and Eloiza Luzon. For this season, Janario and Luzon are back to compete.

Topping the heats were both Janario and Luzon, clocking 25.3 seconds and 25.42 seconds respectively.

Recently crowned 100m champion Jeremiah Malonzo from the University of the Philippines (UP) placed third with a time of 25.51 seconds. Trailing behind her was Ateneo de Manila University’s (ADMU) Kimberly Zulueta, who won bronze last Wednesday night in the 100m, to take the fourth spot in the qualifying round.

The top three qualifiers coming into the finals remained unchanged, as Janario defends her title and wins gold medal in the 200m. She clocked 25.13 seconds, only about a meter in front of her teammate Luzon, who clocked 25.17 seconds to take the silver. Luzon improves on her medal standing this year.

READ  Pressure gets the best of Ravena

Another good news for UST was in the triple jump, as Judy Mae Almasa and Alyssa Marie Andrade both bagged two additional medals for UST, going silver and bronze respectively in the event.

Although DLSU was pleased with the gold, UST still had the advantage coming out of the event as they bagged more medals, and in effect more points.

FEU Hangs on to Title Aspirations

The 5000m event was a bit of a relief for FEU. They bagged gold and silver in the event, and managed to get away with not having any UST long distance runner on the podium.

Joida Gagnoa and Joneza Mei Sustituedo of FEU were guiding each other along to bag the gold-silver finish for their school. Gagnoa clocked 19:34.97 for the gold medal, while her teammate Sustituedo clocked 19:38.65 for the silver medal.

These runners were the only ones in the field to clock a sub-20-minute run for the 5000m.

Another victory for FEU was in the Javelin Throw as they took home the gold medal.

Javelin throw record holder Evalyn Palabrica comfortably won the gold medal for FEU for the third straight time after throwing 46.54m. This throw was still well below her UAAP record of 48.25m, but was still way ahead of the competition.

UST hung on in the javelin throw as Sarah Dequinan threw 42.40m to win silver, around 4.0m below Palabrica’s throw. Coming in behind was UP’s Jenelyn Arle, who threw 39.91m for the bronze medal.