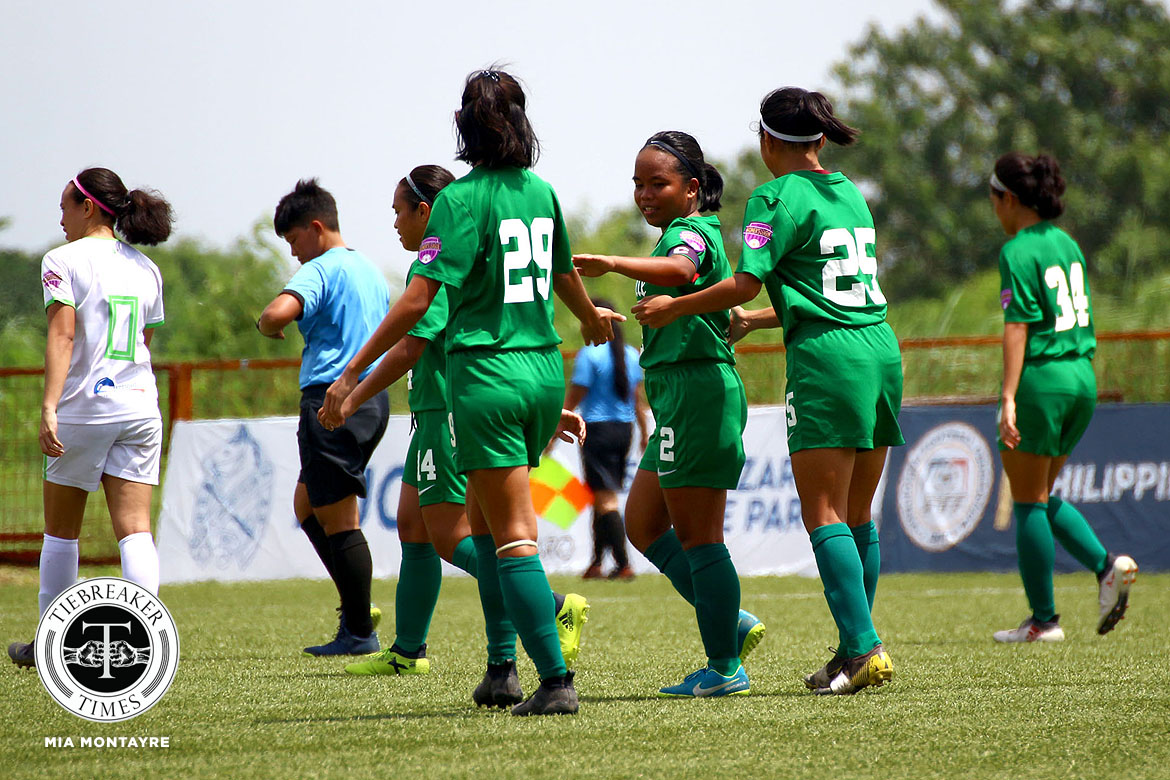 Collegiate teams De La Salle University, Far Eastern University, University of the Philippines, and club team Stallion-Hiraya FC all picked up big wins from the ninth weekend of the PFF Women’s League with the Lady Booters vaulting back on top. 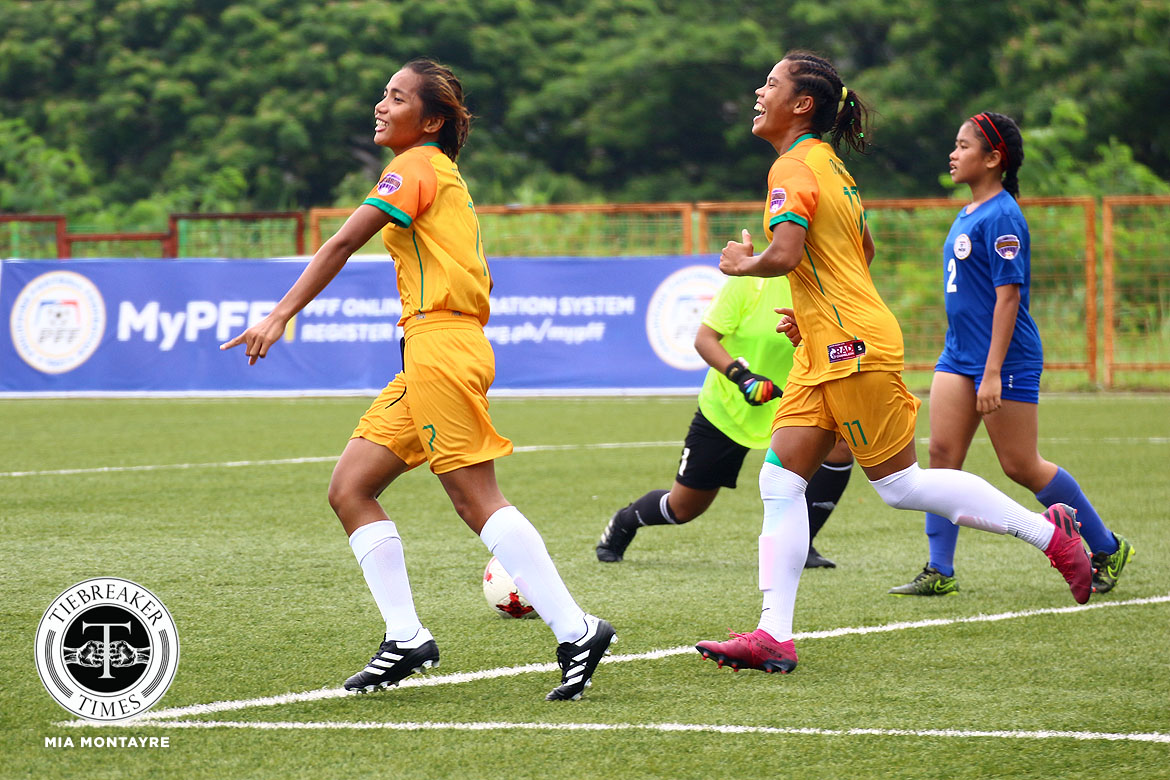 The downward spiral of the once proud and formidable Tuloy FC continues after getting demolished 0-7 by Far Eastern University.

The Lady Tamaraws finally snapped their winless streak of drawn matches with the victory.

When Glory Ann Lado opened scoring for FEU in the 12th minute against her girlhood club, it was almost poetic. Things would soon become tragedy, as Tuloy struggled mightily against a team considered their collegiate counterpart.

Two players registered braces — first, Vanessa Velasco in the 26th and 64th minutes; then Dionesa Tolentin in the 56th and 62nd minutes. Joyce Onrubia and Jonela Albiño also added 38th and 43rd-minute goals to round out the Lady Tamaraw’s 7-goal haul.

After a string of matches worth just a point in each, acting coach Marigen Ariel was glad to finally get the full three points from the game. 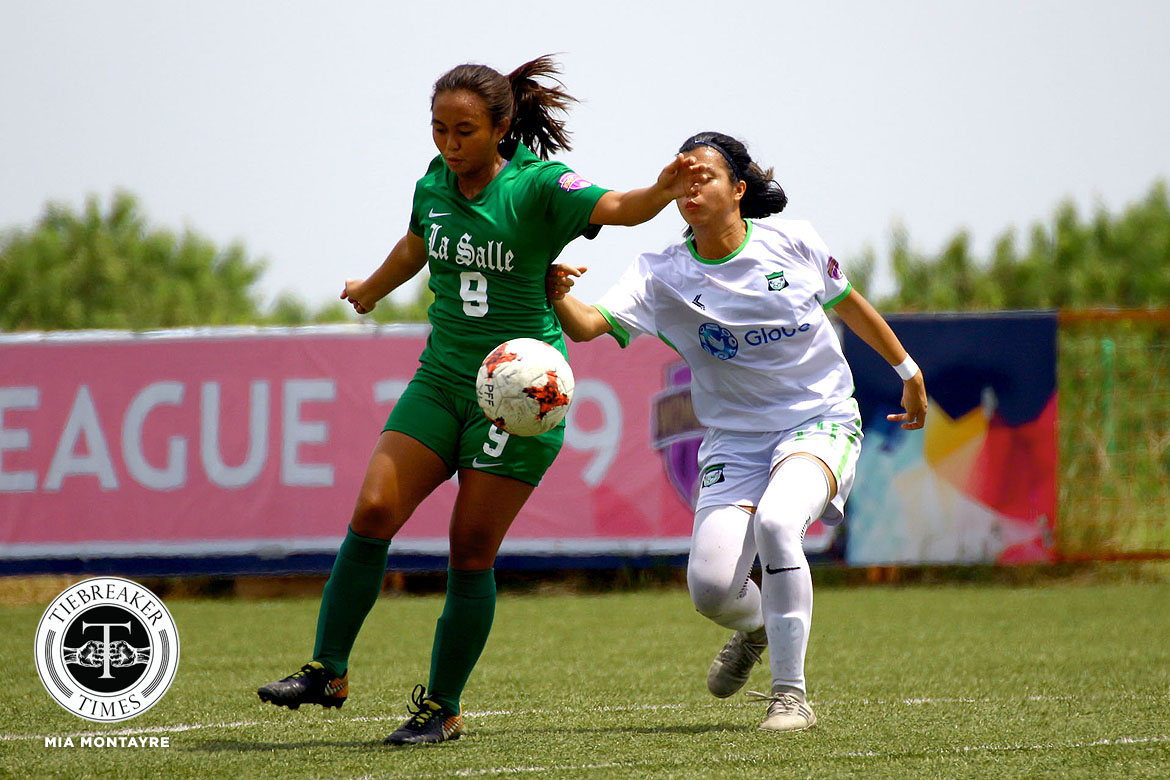 What was set up to be a thriller ended in a one-way goalfest for the De La Salle University as the Lady Booters hammered a souped-up Green Archers United, 6-0.

The presence of national team players within the ranks of GAU, combined with recent graduates from DLSU’s system, did not deter the Lady Booters from Taft. The defending champions even had their way virtually the entire match.

Captain Bea Delos Reyes set the tone early with a brace inside 28 minutes before defender Glynnes Dela Cruz closed out the first half with a long effort in the 33rd minute.

The La Sallian strikers later realized GAU’s defensive line was spread too thin and started to make their move in the second half. Alisha Del Campo knocked in a goal two minutes after play restarted.

Ten minutes later, a flurry of goals from Tejanee Isulat and Michaela Maligalig defied the presence of national goalkeeper Inna Palacios as the rookie duo capped off a pleasant morning for Hans-Peter Smit and his squad.

“I was worried, honestly. They’ve been with me for many years so I know what they can do. But the advantage that we have is we have more regular training than they do. I’m glad we had a good game, it was an interesting game,” admitted Smit, before looking ahead to a big matchup with their rivals at the top of the league.

Yalong brace steers UP to comeback win over Maroons The University of the Philippines were down two goals to Maroons FC before Yanzie Yalong led a late rally to complete a 4-2 comeback.

Familiar foes UP and Maroons FC evened each other out in the opening 45 minutes, leading to a scoreless deadlock at the break. Things took a different turn in the second half as Alyssa Ube broke the impasse just after two minutes. Andrea Montilla then doubled it up for the Maroons ten minutes later.

Determined not to be outdone by their closest peers, UP regrouped to mount a response and were able to pull the scoreline back via Itsuko Bacatan in the 62nd minute. It was then Yanzie Yalong’s turn to shine, as she leveled the match in the 69th minute but still the Maroons were playing too lax.

By the time Khyrztel Muring scored a turnaround stunner in the 73rd minute, the Maroons appeared to have thrown in the towel. They then gave way for Yalong to get her brace in the last eight minutes.

Despite playing against a team who share the same philosophy, Franco Bambico made sure his side came out on top, halting a two-match skid in the process.

“My only instruction to them is to play with pride — that’s all — and to play with their mind. It’s a mind game. Buti na lang they played the game well despite our bench being not that deep. Yun lang naman yung foundation — that is in playing with heart and pride,” he shared. 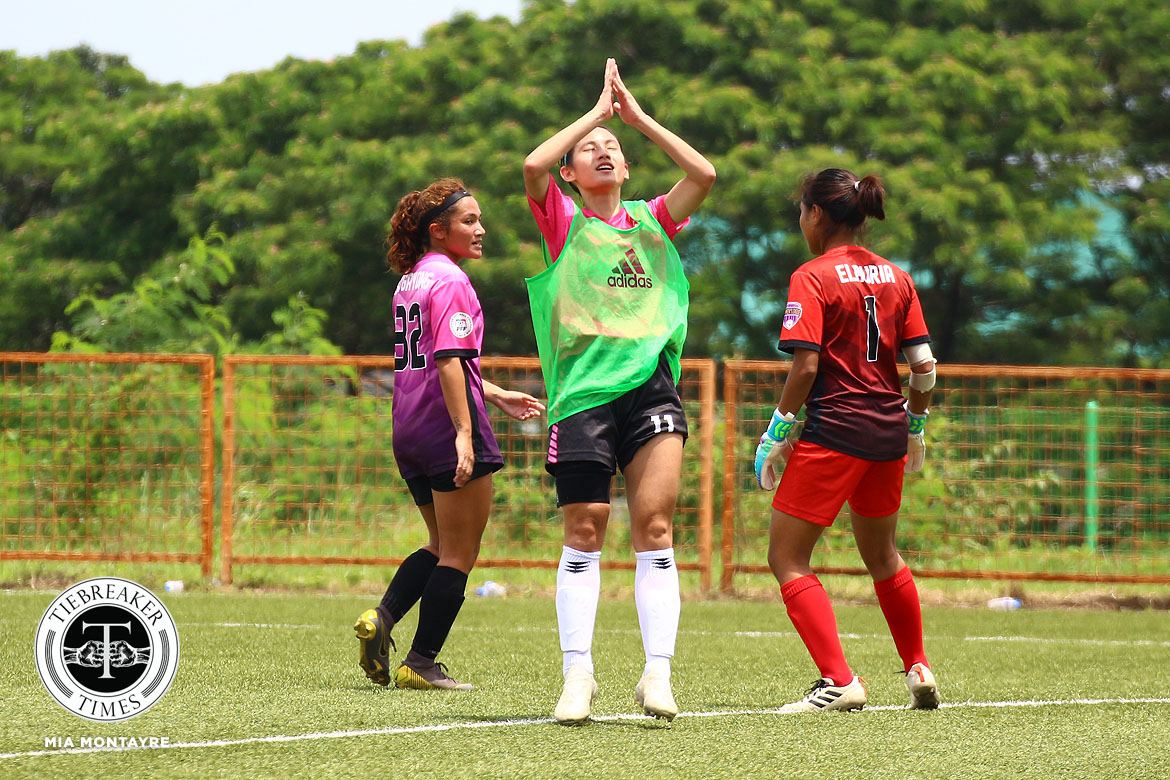 A lackluster Nomads FC fell prey to a buoyant Stallion-Hiraya FC, who clinched their third win and a place in the top half of the table after a 2-0 victory.

Two first-half goals paved the way for Stallion-Hiraya, who are currently enjoying great momentum after a shaky start to the league that saw them virtually at the bottom of the table for five weeks.

Erika Casas’ fine volley finish of Natasha Alquiros’ corner delivery put the Makati-based club up in the 23rd minute. Four minutes later, Aiza Mondera scored a golazo of her own with a cracking strike from distance.

#ReadMore  UP coach Gonzales speaks out after Sta. Clara injury

Even though they were playing without substitutes, and against a younger and fitter Nomads, Cecille Dayrit along with her fellow veterans found a way to control the match.

“We relied on a lot of our football knowledge. We’re all experienced players, so we chose our attacking moments and then called each other back when we needed to defend. It was a lot of teamwork and recalling all that football knowledge that we gained over our many years of playing,” she said.

“Hopefully, that momentum will encourage the rest of the team to show up for trainings and the games; [to] show that commitment because we’re performing as a team even without the numbers. We’re really trying to push the limit despite being outside of college football already.”

The PFF Women’s League continues on Saturday, September 28 at the PFF National Football Center and will see a titanic clash between the only undefeated teams University of Santo Tomas and De La Salle University at 8:00 A.M. Afterwards, Tuloy FC face off against Tigers FC at 10:00 A.M.

On Sunday, September 29, Green Archers United FC will take on Nomads FC while Maroons FC and Stallion-Hiraya FC will resume play of their washed-out match at 10:00 A.M.