CAVITE — With the first round already over for some teams, De La Salle University has completed half of the PFF Women’s League 2019 season undefeated, chalking up 25 points on eight wins and a draw out of nine matches.

Two-time defending champions Lady Archers have distanced themselves further from closest rival University of Santo Tomas by nine points after the latter was stunned by Stallion-Hiraya FC last weekend at the PFF Training Center in Carmona. 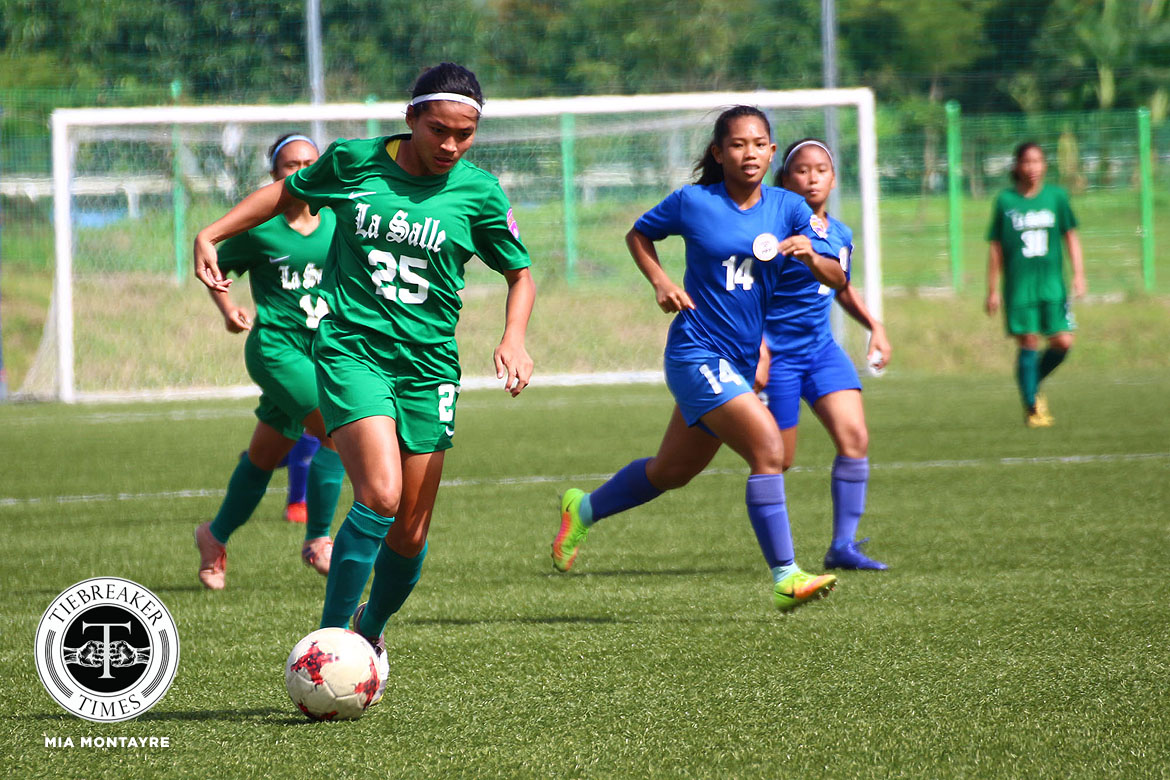 Tuloy FC were still trying to regain footing in the league, only to be disrupted by a routine masterclass from De La Salle University, 6-1.

DLSU was clinical right from the start with three goals scored in the first seven minutes. Angelica Teves registered a brace in the 2nd and 4th minutes, before Alisha Del Campo chipped in the third goal.

Hans-Peter Smit’s side had no qualms about denying Tuloy any breathing room. Tejanee Isulat added another goal in the 20th minute for a back-breaking four to nothing lead at the half.

“It just takes one to start the ball rolling, it’s a domino effect. If there’s one player who can play heads-up ball, gives her all, that’s just going to rub off on all the other players as well,” said Smit.

Despite the lopsided score against them, Tuloy did not shy away from responding. Isabella Bandoja denied the league leaders with a clean sheet in the 71st minute, but Del Campo answered back with a pair in the 82nd and 88th minutes en route to a hat-trick.

“The girls performed up to expectations today, and they’ve responded pretty much the way we wanted them to. That’s our objective in this game — to finish the first round unbeaten, so that it will only do well for us when the second round starts. The mentality, the attitude, that’s what’s important to me,” Smit added.

DLSU has locked up the top spot, and is the only team to have eclipsed the 20-point mark. 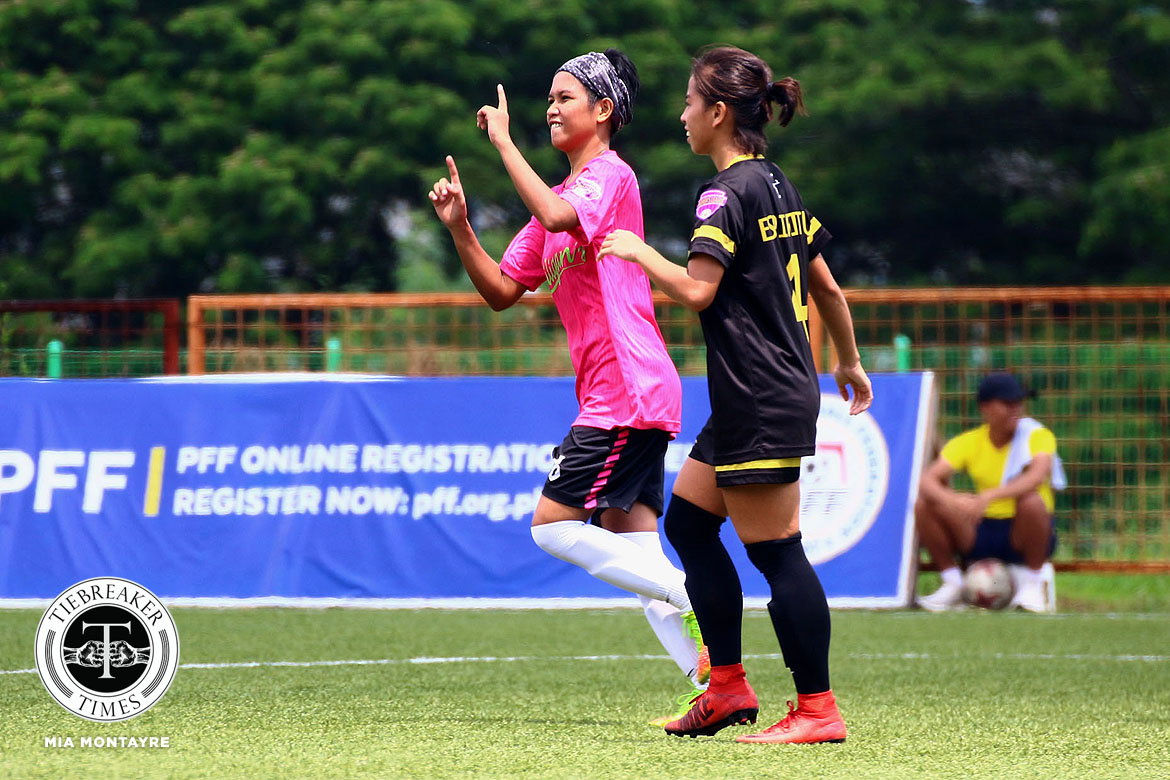 University of Santo Tomas was about to make up for its narrow loss to DLSU, but Jennizel Cabalan inspired Stallion-Hiraya to a shock 2-1 defeat of the collegians instead.

Stallion-Hiraya was coming off a four-match winning streak, which UST looked to put to the test. It appeared to go the way of the UAAP team when the Tigresses breached Stallion-Hiraya’s defenses for the first time in six matches, denying Haya Ibarra another clean sheet with a 20th minute goal credited to Cecile Deita.

But Philip Dinglasan’s side remained positive, as they used their hot streak as motivation to overcome the challenge UST posed.

“We knew that if we weren’t going to score the goals first, at least we knew that we can keep it tight, and if it’s tight all throughout… Sa football talaga, as long as you get your chances then you can really steal a goal or two,” he said.

The veteran club utilized its strengths to mount a comeback. A combination play between former UAAP stalwarts Cecille Dayrit and Cabalan produced the crucial equalizer in the 65th minute. Four minutes later, referees awarded a handball penalty to Stallion-Hiraya. Cabalan then stepped up to the task, converting the spot-kick. Moments later she netted her brace as well as the eventual winning goal.

“The team is really fortunate to have a lot of experience. They were the ones who were in those universities before, and they already know what it’s like to play in a match that is high-pressure or crucial,” said Dinglasan.

Stallion-Hiraya finish the first round on an impressive five-match winning streak, which has propelled it to third place (16 points, 5-1-3), a far cry from the start of the season where the club found itself second to last.

“A draw was going to be good enough for us but ayun, naka-nakaw ng goal. I think we have good momentum going to the second round. Everybody’s character is showing, we’re in a good place now and hopefully the second round schedule comes out sooner than later so that we can start playing already,” Dinglasan added.

Tigers get moral draw versus UP 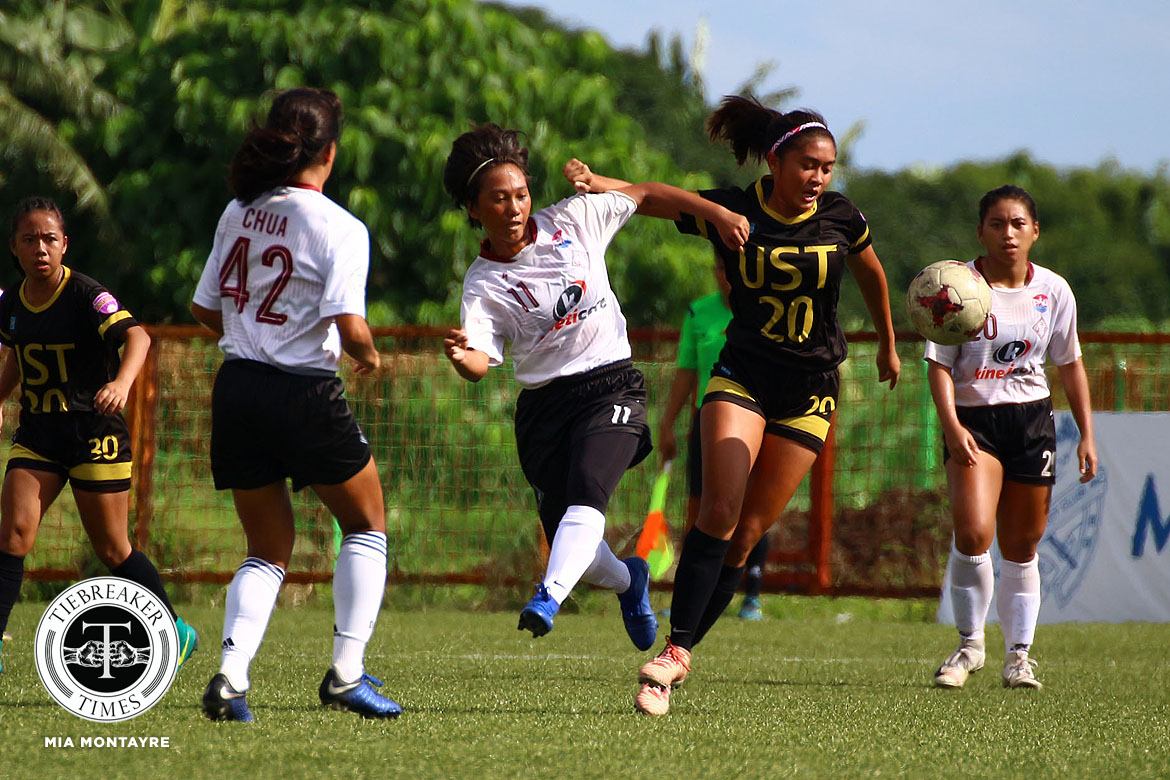 Hoping to pick up more points, University of the Philippines was instead forced to a 1-1 draw with the young and earnest Tigers FC.

Playing without many of its regular starters due to several issues, UP approached the game cautiously, mindful of the Tigers’ pace and speedy wingers. Yet it was UP that drew blood first after Yanzie Yalong’s strike three minutes before halftime, for the 1-0 lead.

Tigers coach Geraldine Cabrera decided to insert veteran midfielder Hazel Lustan to bolster their attack at the start of the second half. Eight minutes later, Judy Mae Prado netted the equalizer to the surprise and joy of many.

Surprisingly, her UP counterpart was just as content despite giving up the full points.

UP finishes the first round in seventh place with 10 points and a 3-1-5 record. 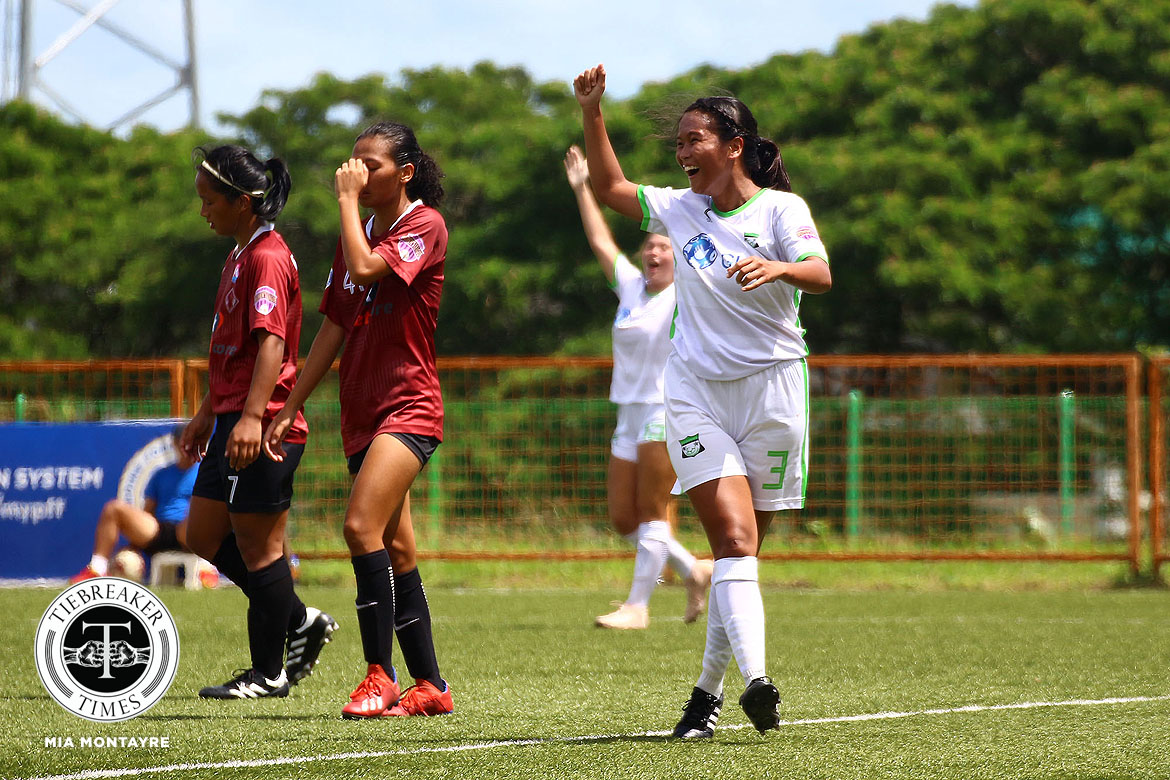 A strong lineup enabled Green Archers United FC to stave off a late rally by Maroons FC and get the 3-2 victory.

Shaking off the disappointment of its previous matches marred by absences physically and mentally, GAU put together the numbers it needed for a bounce-back game that included most of its national team players.

GAU’s determination shone, through as it quickly pressured the Maroon half. Thirty minutes in, Aira Agustin found herself on the scoresheet to hand GAU the lead. Chelo Hodges doubled the advantage in the 41st minute, before Andrea Montilla canceled it out four minutes later.

In the 55th minute, Regina Aliping gave GAU the two-goal cushion again, but Alyssa Ube pulled it back in the 78th minute. The Maroons had several chances to score more, only to be waved off for offside. They ultimately come up short as GAU escaped with the three points.

An excited Elvin Marcellana was proud of how his side outsmarted the Diliman-based club.

The PFF Women’s League will close out the first round on Saturday, October 12 at the PFF National Football Center with Tuloy FC taking on the University of Santo Tomas at 8:00 A.M., followed by Tigers FC facing Far Eastern University at 10:00 A.M.