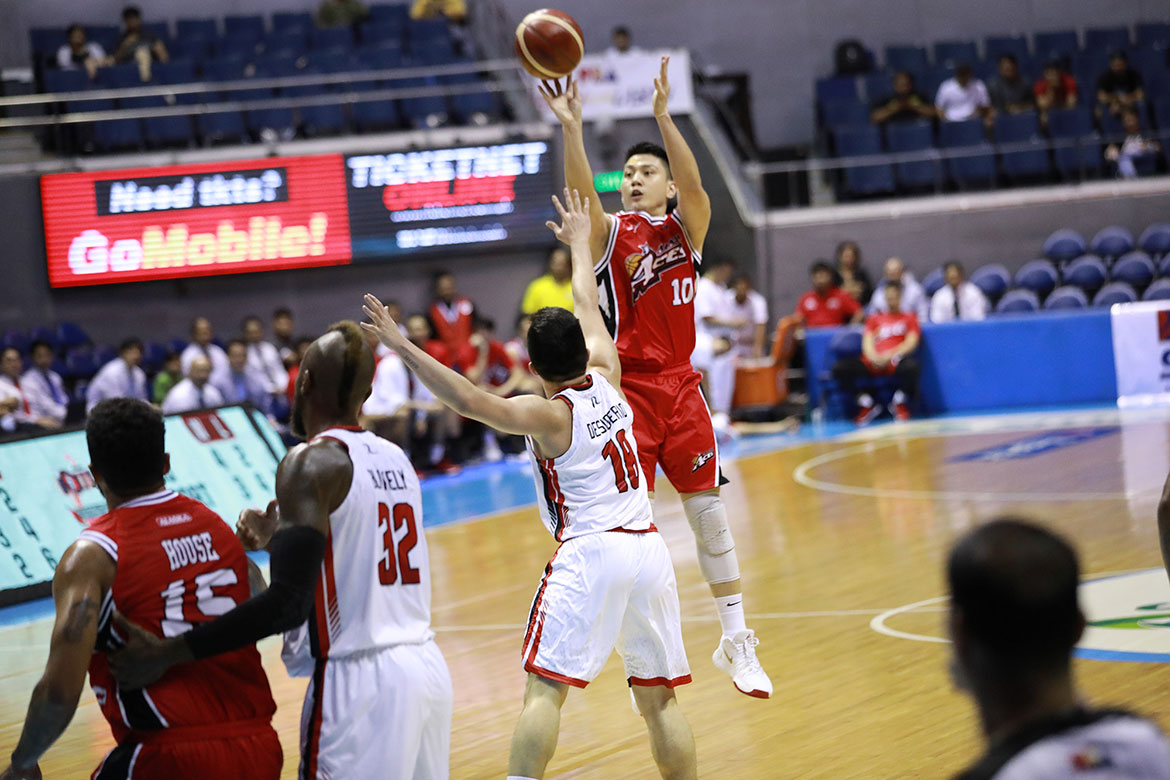 Alaska took advantage of the rejigged Blackwater’s incoherence, 101-91, to collect its second win in the 2019 PBA Governors’ Cup Saturday evening at the SMART Araneta Coliseum.

Sophomore forward Jeron Teng came off the bench and finished with 19 points and eight rebounds to lead the Aces in the victory that hiked their card to 2-6, keeping them alive in the playoff hunt.

Abu Tratter faced his former team for the first time since being traded last month and he showed up with 18 points on an excellent 8-of-10 shooting, on top of six rebounds, two steals, and a block.

“What you like about those guys is they’re fearless,” lauded coach Jeff Cariaso of the La Salle products. “When they come into the game, they’re ready to battle no matter who’s in front of them.”

The two were indeed impactful for Alaska in the win. Tratter scored 10 of his output in the opening frame alone as he helped the Milkmen establish control of the game with a 29-19 lead.

Teng, on the other hand, made key contributions in the following quarter, scoring six of his nine points in the period in a 12-0 run that gave the Aces a 60-36 advantage at the half.

Franko House would then give Alaska its biggest lead at 26 with a basket to open the third quarter, 62-36.

House also made his presence felt in the conquest as he finished with 18 points and 11 rebounds.

“I want to commend the guys for sticking to this process that we’re on, understanding the details matter,” Cariaso said. “Our focus was really defensively, on the small details.”

Marqus Blakely had 19 points, seven rebounds, seven assists, four blocks, and two steals to lead Blackwater, which has made changes in its lineup after two separate trades in a span of days.

It has just welcomed KG Cañaleta and Mike Tolomia, whom it got from the Meralco Bolts last Friday in exchange for gunner Allein Maliksi and seldom-used forward Raymar Jose.

The Elite actually fought back in the third canto as they knocked to within just five, 73-78, but the Aces were quick to respond as House and Teng were there to foil their comeback bid.

Ray Parks and Mac Belo each had 14 points in Blackwater’s third loss in a row that dropped its card to 2-6 as well.

Alaska takes on NorthPort next (3-4) on November 3, Sunday, still at the Big Dome, while Blackwater plans to end its skid versus Ginebra (4-2) on Wednesday, October 30, at Cuneta Astrodome.