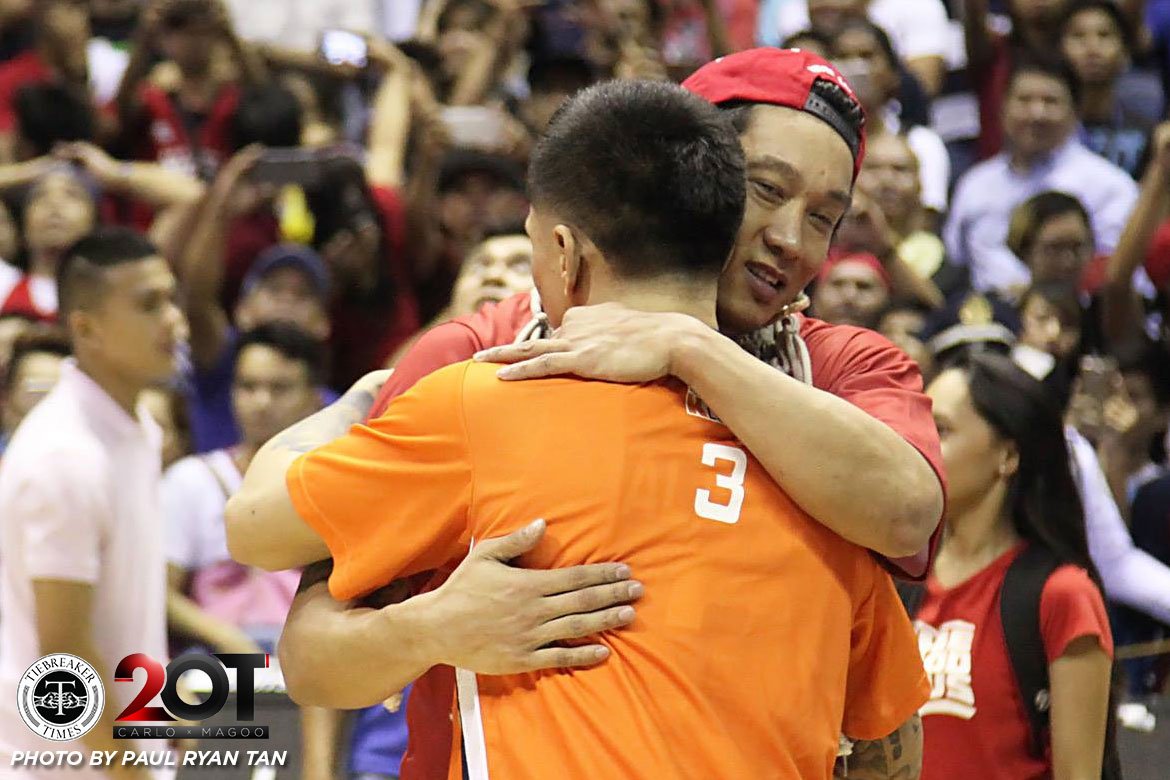 Jimmy Alapag has had countless battles with some of the PBA’s finest, but there’s really that one match-up which, according to him, brought out the best in him whenever they crossed paths on the hardwood.

“‘Cause I always felt, for a long-time early in my career, that I was chasing Jayjay.”

Helterbrand came into the league in 2000. By the time Alapag arrived three years later, he was already one of the PBA’s young stars, forming a deadly backcourt tandem with Mark Caguioa at Ginebra.

Alapag then introduced himself in the league in a big way. The 10th overall pick by Talk N Text earned Rookie of the Year honors at the end of the 2003 season, where the Phone Pals won the All-Filipino crown.

The two would meet each other in the Big Dance of the 2004-05 Philippine Cup Finals. There, Helterbrand and Ginebra prevented the flagship MVP franchise from defending its throne by winning the series in six.

They would both achieve success individually after that. Helterbrand, in 2009, was crowned as the league’s Most Valuable Player after steering his team to the Philippine Cup Finals, where they lost to San Miguel.

A couple of years later, it was Alapag’s turn to be feted with the league’s highest individual honor. He led Talk N Text to the Philippine Cup and Commissioner’s Cup championships in the 2010-11 season.

That conquest of the mid-season joust came at the expense of Ginebra, which allowed Alapag and the Tropang Texters to get even for the heartbreak they suffered in 2005 — although Helterbrand wasn’t there due to injury.

Alapag and Helterbrand fought for a title one last time in the 2016 Governors’ Cup Finals. The latter emerged victorious again, as the Barangay took down Meralco in six, thanks to Justin Brownlee’s trey at the buzzer.

Both are now retired from the game, and there is no question that they are two of the best to ever play in Asia’s pioneering pro league. And for Alapag, he will forever have that respect towards his fellow future Hall of Famer.

“He was obviously one of the best guards to play in the PBA, one MVP before I did. And I remember just watching some of his games, and he was just playing at such a high level and really dominating games from the point guard position,” said Alapag, who was teammates with Helterbrand in the San Miguel Team Pilipinas that played in the 2007 FIBA Asia Championship.

“The classic match-ups early in our careers — I lost to him a couple of times in the Finals — I was looking forward to those battles because I know I have to be at my best. The utmost respect for him and what he did in the PBA.”

Did UP break protocol during Akhuetie’s ‘shootaround’ in Cavite? Coach Bo says no

Rolando Dy flies to Bahrain, to take on Irish foe in BRAVE CF