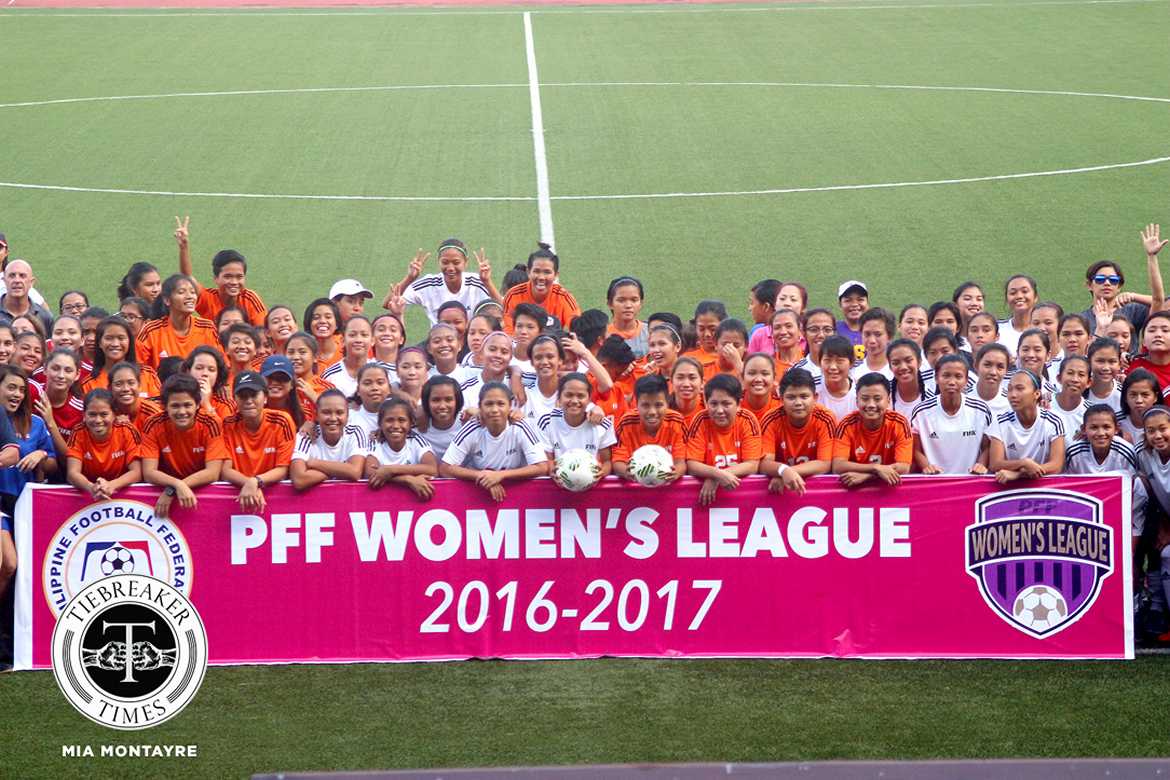 It was a perfect sunny day when the inaugural PFF Women’s League kicked off last Saturday, November 12.

A number of officials and key members of the Philippine Football Federation were present to commemorate the historic event. A mini-ceremony took place before the scheduled games began in which players partook in a parade and were later introduced in front of family, friends, fans of the sport, and the media.

The opening match was a privilege given to the PFF Women’s Cup 2015 champions Far Eastern University Tamaraws and young club OutKast FC, who are comprised mainly of FEU graduates.

It was a close contest, with each side having their fair share of chances; ultimately, neither were able to convert ending the match in a stalemate. For now a single point in the table will have to suffice for both teams, and the coaches and managers are satisfied with it.

FEU coach Let Dimzon revealed she has been experimenting with a new formation and was glad to apply it against a team that is very familiar with FEU’s usual style of play.

Penales expressed relief that they not only finished the match despite players suffering cramps, but they also managed to hold out against an FEU side that practices every day, a privilege they don’t share.

Despite the obvious fitness problems, team manager Keuts Smith believes OutKast FC will do well in the league.

“There is a relationship, a friendship, which I think will make the difference, the chemistry that has made a difference in the past, in all those tournaments,” the French-Filipina alumna of FEU added.

Fuego Espanya is another club new to 11-a-side play and were prone to errors, such as defensive miscommunication which resulted in an early 13th minute scramble-in-the-box goal for Hazel Lustan, and two instances in the 19th and 30th minutes that led to penalties.

Charisa Lemoran was tasked with both spot kicks and thumped in another goal five minutes afterwards to complete the league’s first hat trick. Jan Christelle Cleofe fired a fifth goal from way out in the 60th minute, then Bea Felice Panganiban punched in another nine minutes later.

The Lady Tigresses apparently hadn’t had enough, as Yvone Queenie San Diego added a seventh and final goal in the second minute of injury time.

“Based on their performance, the second half was better than the first one. Their young age despite their being titas, I think they played very well. There’s no doubting their commitment, their talent, their willingness to have fun, even in the highest league,” said Clarino, who also indicated that the team will work on improvements during the long break.

One new club that did manage to get a good result was Hiraya FC, when they blanked Kaya FC, 4-0.

Hiraya FC is composed mostly of former UAAP and national team players, resulting in a strong side that used its experience against a team filled with young players.

Kaya FC, a popular club in the Philippine football scene, is also well known for its youth development program, so it is no surprise that their team is mainly made up of players not older than 17.

Vanessa Anne Fabon opened the scoring for Hiraya in the 24th thanks to a nifty through ball from Daryl Ann Mendoza. Twelve minutes later, Inez Achacoso doubled their score off a rebound. Recent UAAP MVP and national team member Molly Manalansan tripled it right before half time.

Kaya did manage to settle down better in the second half, but could not prevent a fourth goal from Hannah Faith Luna minutes before the final whistle.

Their coach Steve Nicholls still found positives for his young charges. “I think the girls have done well, for their first game in a competitive league at 11-a-side at such a big field such as Rizal. This is their first time playing on a field this size and 11-a-side football. So i think they’ve done well, they’ve given a good account of themselves,” Nicholls said.

Surprisingly, Hiraya managed this win without a coach. “It was difficult for us not to have a coach in terms of direction for the team and rotation, which is why in the first half we did well for 3-0,” said Alice Dela Peña, one of the more senior players on the squad.

“Basically it was hard leading people that didn’t know where they were going din, but we were able to figure it out,” Dela Peña added, noting that they did well for a team that played together for the first time.

Another key member, Gely Tiu, reveals that this team was founded by teammate Haya Ibarra, and was very pleased with how well they did in the team’s first official tournament.

“Everyone’s coming from different backgrounds, the one thing that kept us together and kept this dream alive and going is we all love to play football. Because of our love for football, gusto namin lahat maging competitive, and yun nga, we just keep encouraging each other so our goal namin now is to get to know each other. Team building talaga,” Tiu said, hinting at on what they will focus on in the break ahead.

They are the reigning UAAP champions and they have a lot of eyes on them since winning the title last May, and University of the Philippines delivered.

Captain Mary Rose Obra struck three times in the 14th, 32nd and 73rd minutes to quash any hopes of a comeback, after a Julia Luisa Panganiban’s goal five minutes after half time energized Green Archers United FC for most of the second half.

GAU do have an impressive lineup that is a good mix of veterans and stars from the UFL youth league circuit, but it was not enough to overturn the score against collegiate champions.

UP mentor Andres Gonzales was actually surprised with his side’s success considering the team hadn’t done so well in lead-up tournaments. “Very satisfied with the performance especially in the first half. Second half medyo nacontrol ng opponent, we started slacking off but overall I’m very happy with how the girls played,” Gonzales said.

He also praised the formation of this league, saying it will benefit girls in the long run. “Definitely that will help the girls develop. Although yung competition, yung UAAP teams they will really be there sa top. And then mga club teams, like a number of them, technically very good, kaya lang wala talagang fitness kasi wala naman training. Pero at least yung exposure sa different environments, can only help the girls, and yung teams naman they just have to make the most out of every game,” Gonzales remarked.

Marcellana will make sure to work on his team’s problems, joking that it is not the younger players he has problems with. “Yung mga bata sa Zobel, okay naman sila. Yung gusto ko i-train yung mga mas matanda, yung mga tita nila,” he teased, before acknowledging the high school players also need to work on their confidence.

FULL ALBUM: CLICK HERE
The La Salle that faced the Younghusband-brothers-backed squad looked like a different team compared to the one that featured in the UAAP finals last May. Absent from the starting XI were many key players who have been hampered by injury, including star goalkeeper and captain Inna Palacios.

However, they still dictated proceedings against the team previously known as the Chelsea FC Soccer School Philippines, culminating in a 4-1 win.

An early goal in the 6th minute from taliswoman Sara Castañeda set the tone for the game, and she would go on to score two more in the next 26 minutes to complete the league’s third hat trick.

TYFA’s Chanda Solite pulled one back shortly after, but Kyra Dimaandal’s effort in the second half punctuated the Taft side’s dominance of this game.

DLSU coach Hans-Peter Smit wishes he had a complete team but is happy that the setback has allowed other players to shine.

“Well, considering that I’m minus five [players and] four on our first eleven due to injuries and dengue. But this is a good team, I told them, ‘Now is the time for you to step up and let’s see what happens.’ So, I’m quite satisfied except for the individual mistakes na hindi sumusunod sa instructions. It’s good to start a league or tournament with a win especially when your manpower is down,” Smit said.

He also revealed that even though he only has one goalkeeper active for his current squad, he has loaned his reserve keeper (Natasha Lacson) to Green Archers United FC.

“It’s better so she can be exposed, so she can play every game, good exposure for her,” Smit added, and he is hopeful that Palacios will recover in time.

The PFF Women’s League will be taking a break until December to give way to the AFF Suzuki Cup.

December 4 will have Green Archers United FC opposite Hiraya FC at 2:00pm, Fuego Espanya against The Younghusband Football Academy at 4 P.M. Ateneo de Manila University will finally play its first league game in a classic derby against De La Salle University at 6:00pm.