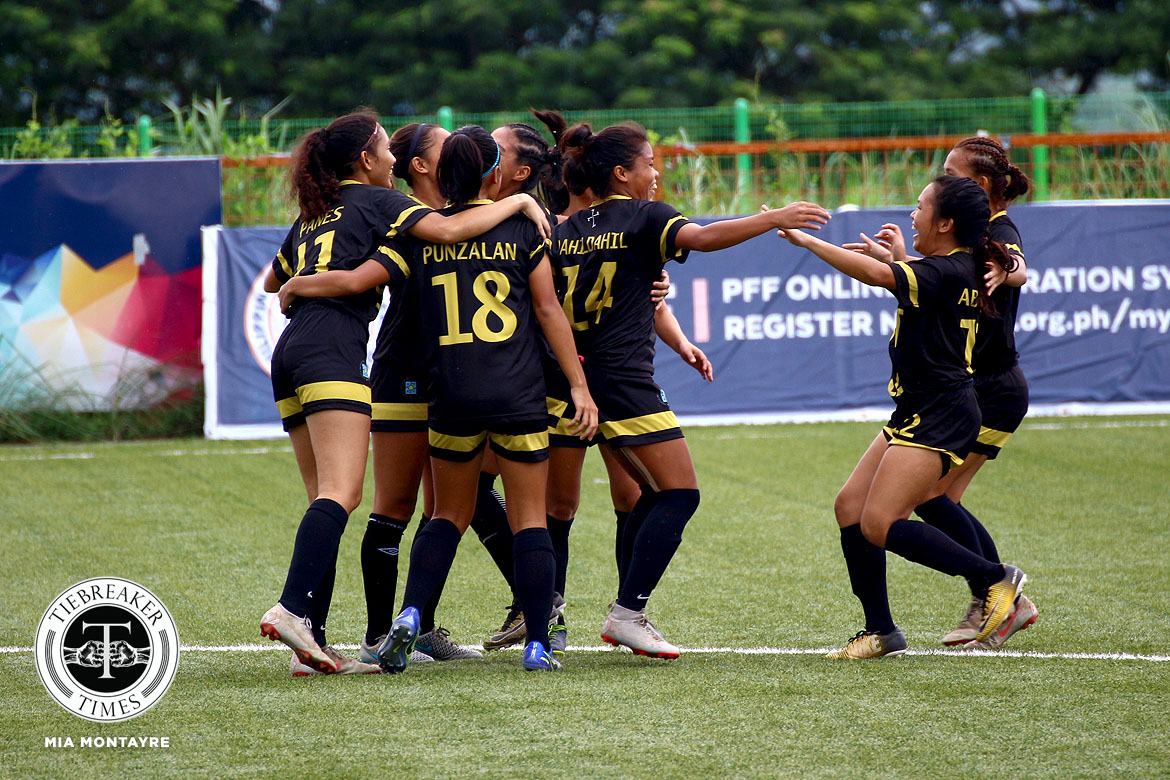 With the defending champions on bye last weekend, University of Santo Tomas took the opportunity to wrest the mantle from De La Salle University as leader of the PFF Women’s League.

Playing without many of their best players due to national team duties, the Green Archers United FC dug deep to eke out a 1-0 win over Tigers FC.

The young and old collective from Espanya took control for most of the match denying their Alabang-based counterparts any opportunities. However, even the slightest dips in focus would prove to be disastrous as was the case for the Tigers.

Stephanie Goñe took a swing at the goal and while it looked like goalie Carmela Sacdalan had the ball secured, it slid behind her and into her own net gifting GAU a 74th-minute goal. The Tigers tried to make amends but key stops by keeper Erika Turtur and a goal-line save by Meryll Ledesma denied them any points in the contest.

“Hindi kami sumasabay sa kanila kasi they are a strong skilled team, players nila mabibilis. So we played low and just went for the counter,” said coach Elvin Marcellana who was well-aware his squad were no match to the fitter and more organized Tigers and made sure to adjust their play accordingly. 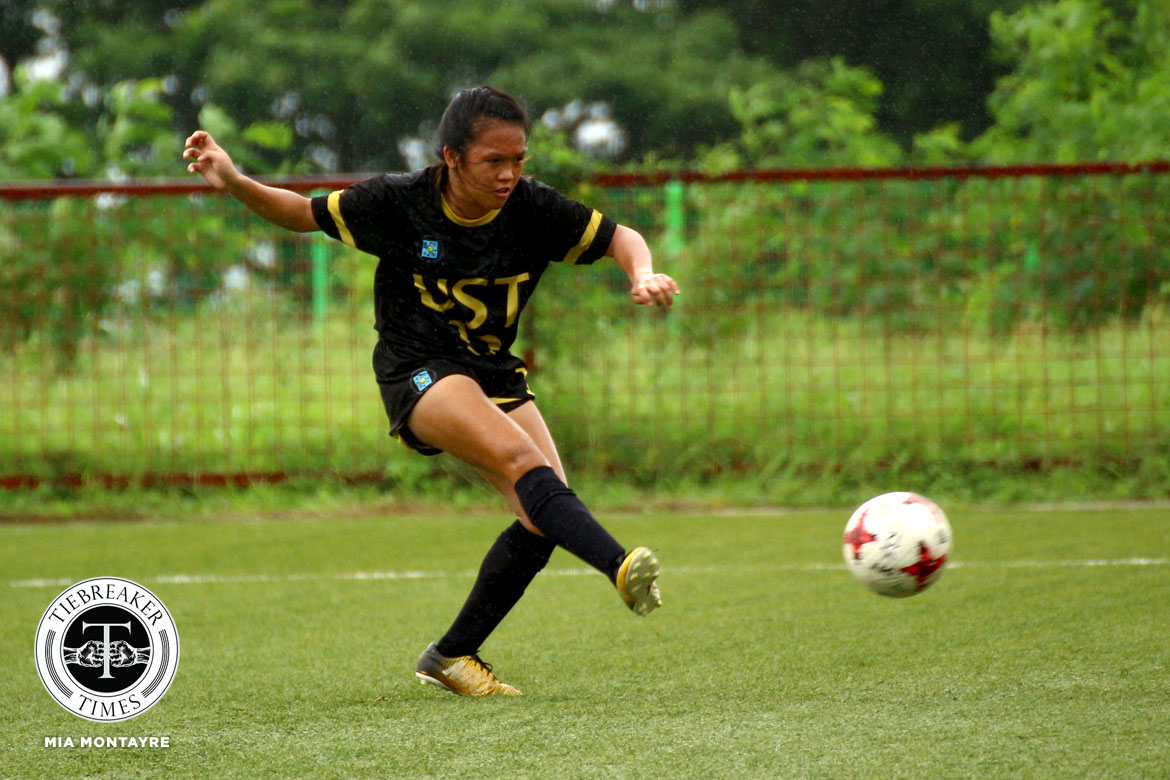 Nathalie Absalon was again on point after registering a first-half hat-trick including the quickest league goal on record in the first minute with the other goals taken in the 10th and 32nd minutes.

Mary Joy Indac resumed scoring duties in the second half with a 59th-minute strike. Shelah Mae Cadag made it five to nothing by the 73rd minute with Mika Punzalan closing things out for UST at near full time.

UST coach Paula Cervantes hopes her side can keep their momentum and knows that maintaining focus will be key. 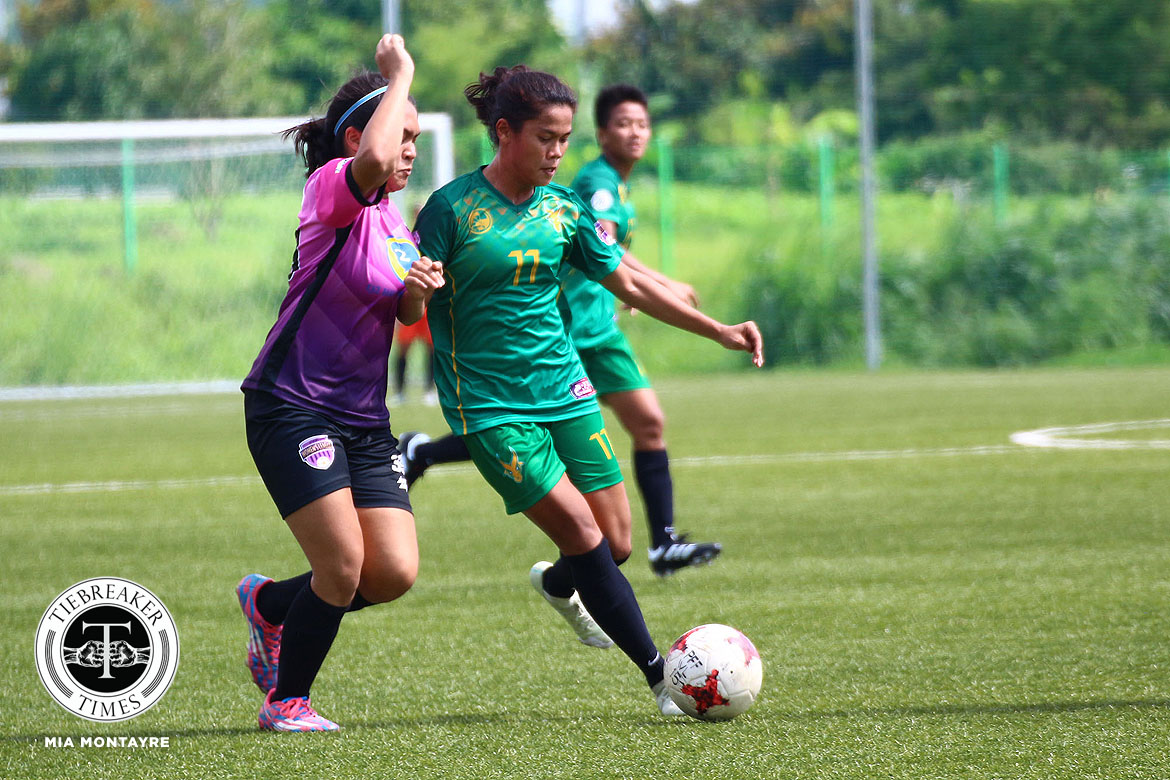 Far Eastern University was too much for an eager Nomads FC as Joyce Onrubia scored her second straight brace for a 4-1 win.

It didn’t take long for Onrubia to enter attack mode and in the 4th minute she drew out keeper Yasmin Elauria before lobbing the ball over her head and mitts for the game’s first goal.

At the half hour mark, a stunning goal gave way to a commanding FEU lead. Eojin Koh had the softest of first touches that even with firing from outside the box it gave little to no time for Elauria to parry.

Nomads were determined to not let the collegiate workhorse have their way and in the 75th minute, Joyce Semacio answered back with a goal of her own by way of a deft free-kick that swooped over the Tamaraw wall and into the top corner.

Let Dimzon’s side had the last say in the contest however as Samantha Green closed it with an 84th-minute strike. The coach, however, was still unimpressed. 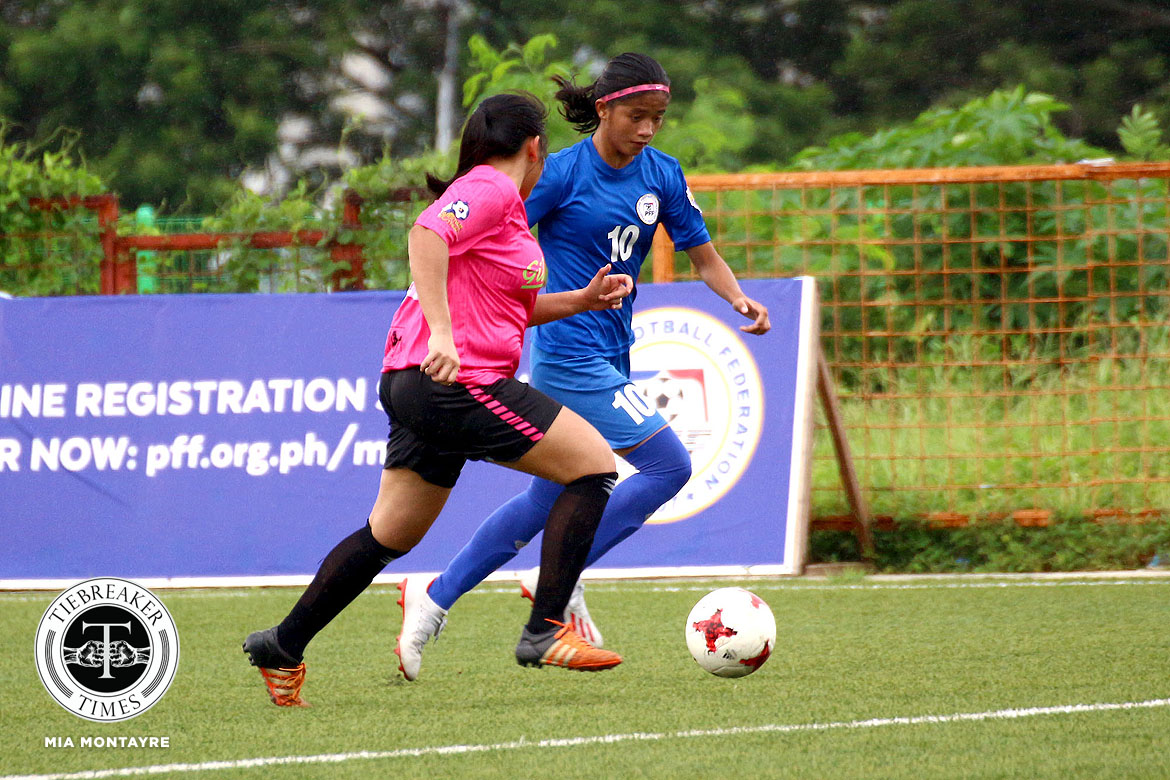 The league’s youngest team had trouble shaking off one of the league’s older teams but it was Tuloy FC that ran away with the 6-4 victory.

An own goal in the 5th minute went in favor of Tuloy and capitalizing on this momentum, found their second goal five minutes later via Jenny Perez.

Mindful of not letting the gap get too wide, the veterans of Stallion-Hiraya regrouped and three minutes later Jennizel Cabalan put them on the board. Their younger counterparts responded to the push with a shove and within five minutes Andrea Jane Limboy reclaimed their two-goal cushion.

After half an hour, Jonalyn Lucban extended their lead to three before Stallion-Hiraya responded with a vengeance. Cabalan struck again in the 33rd minute and Marianne Narcisso added another six minutes later to pull it back to a single goal margin.

Tuloy struggled to regain momentum until Isabella Bandoja found the right gear to push Tuloy back ahead for good with a brace in the 48th and 78th minutes. Natasha Alquiros’s strike from distance in the 80th minute provided some consolation to Stallion-Hiraya especially in keeping their goal difference manageable.

The PFF Women’s League continues on Saturday, August 17 at the PFF National Training Center with a rematch of the UAAP Season 81 final between De La Salle University and Far Eastern University at 8:00 A.M. followed by the University of Santo Tomas and Maroons FC at 10:00 A.M.

On Sunday, August 18, the Green Archers United FC will take on club rivals Stallion-Hiraya FC at 8:00 A.M. followed by two teams seeking their first win in the University of the Philippines and Nomads FC at 10:00 A.M.