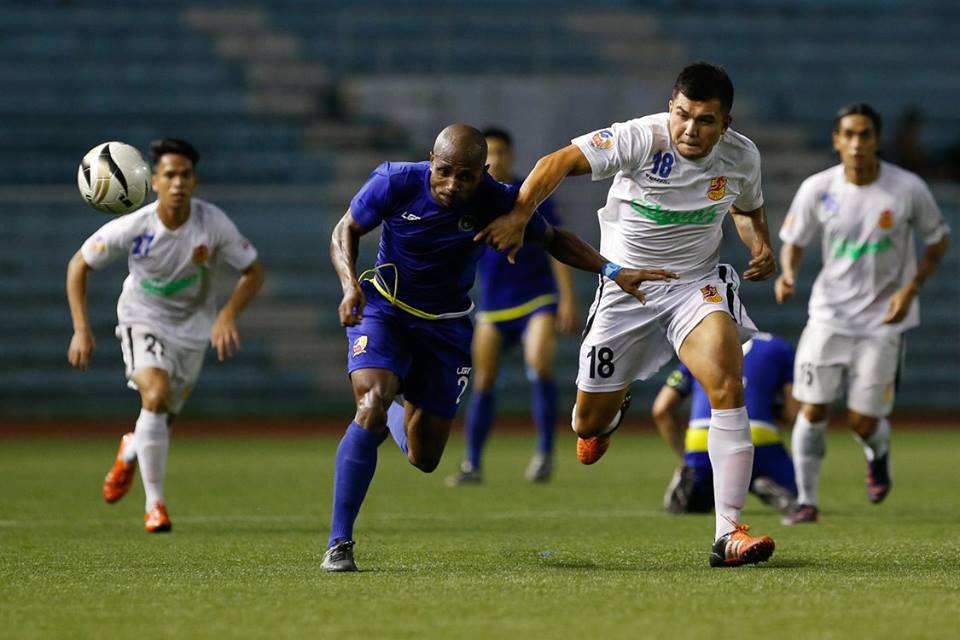 The road to redemption continues.

Two first-half goals were enough for 2014 United Football League Champions Global FC to reclaim its place in the Cup Final after four years of wait over Stallion FC, Wednesday at the Rizal Memorial Football Stadium.

Global made known of its intentions early in the match as they were able to pile the pressure from the get-go. Hikaru Minegishi, Milad Behgandom, and Misagh Bahadoran continuously threatened the Stallion defense as they were only left to clear and deny the chances. Matthew Hartmann registered the first dangerous attempt for Global early on as he fired a left-footed shot to the goal, forcing opposing keeper Ref Cuaresma to tap the ball out.

This constant attacking from the People’s Club finally bore fruit in the 29th minute with the breakthrough goal. Bahadoran searched for a teammate inside the box, only his cross was deflected for a corner. At the ensuing corner kick, Milan Nikolic calmly slotted the rebound into the back of the net to put his team on top.

After the goal, both teams plucked decent attempts into the goal but none bothered both Cuaresma and Patrick Deyto. Nevertheless, Global found another attempt at goal go past the former just before the halftime break to double the lead. Dennis Villanueva forced Cuaresma to save his attempt, but former Stallion striker Louis Kaole was there to head the rebound for Global.

Global Head Coach Leigh Manson shared what they have told his wards during the break. “The important result is to win after 90 minutes,” he said.

And that was what was at the back of the minds of the Global FC players as they went back to the pitch with even more vigor. At the 61st minute, Bahadoran once more made a fantastic run towards the goal after a pass from Minegishi but his shot went over. Minutes later, Daisuke Sato came all the way from the back and attempted to send a cross. Unfortunately for Sato, the offside flag was up before anyone got to the ball.

Stallion, on the other hand, was not devoid of chances in the latter half; however, they failed to convert on their attempts. An excellent build-up play ensued at the 69th minute as Simone Rota’s final touch went straight to Deyto. In the following sequence, Jordan Mintah lost his marker but only went as far as Nikolic who was there to stop him.

Global was able to thwart the attempts made by Mintah and Stallion to close out the game. At the 85th minute, Stallion found substitute David Basa inside the box. OJ Clarino, a former teammate of Basa in the collegiate ranks, locked down on Basa to clear the ball out of danger to seal Global’s return to the last dance.

Manson was delighted that his team pulled through with the win. “It is always delightful to challenge for silverware,” he said after the game. The mentor, however, believes that they still need to work on their defense and will work harder for the title match.

Global FC will take on the reigning League Champions, Ceres-La Salle FC, on April 16 at 8:30 pm in the same venue for the 2016 UFL Cup Final. Meanwhile, Stallion FC will test their mettle against last year’s Cup titlists Kaya FC earlier that day at 5:15 pm.

Guirado, Ceres-La Salle dethrone Kaya in game for the ages