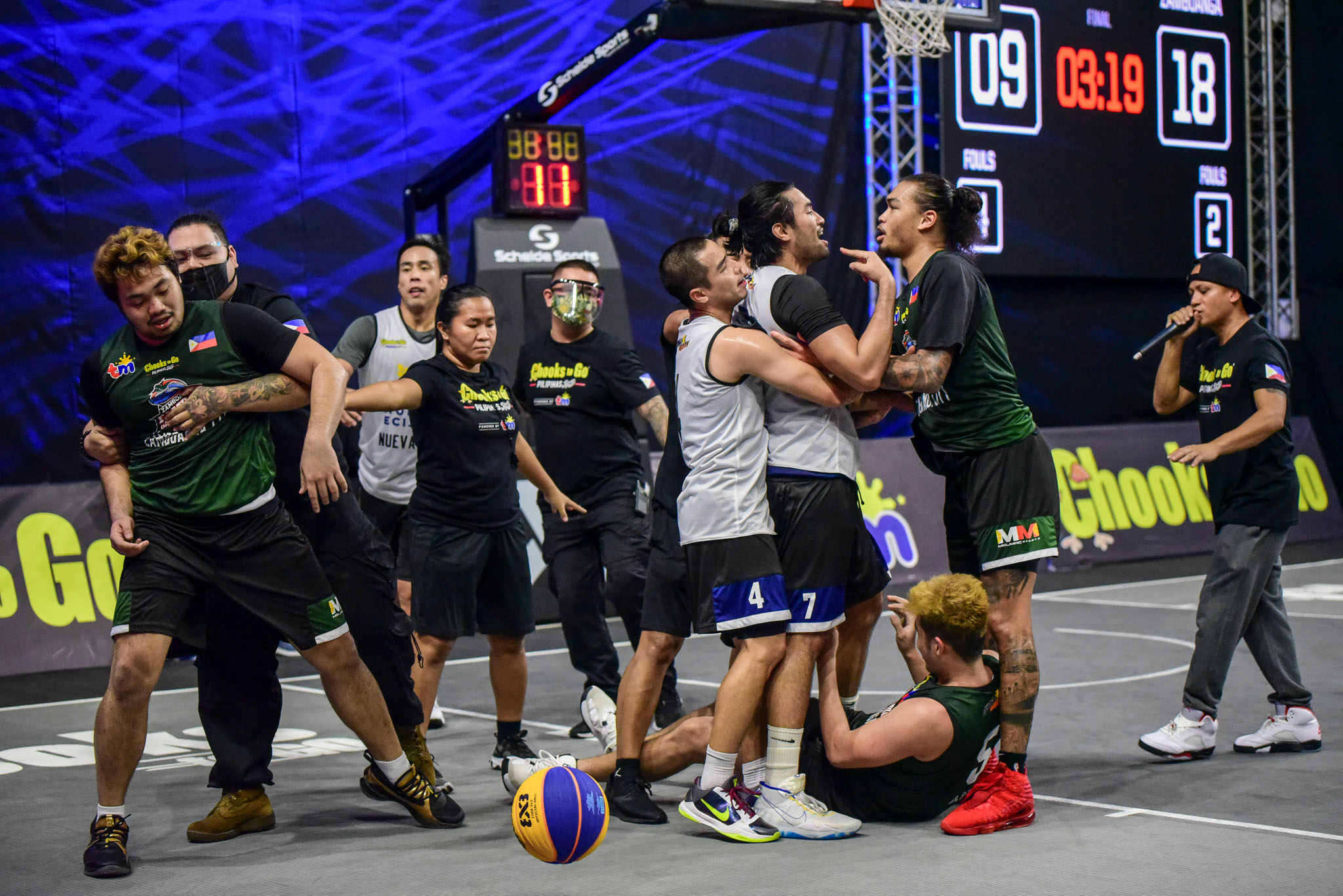 CALAMBA, LAGUNA — So far in the 2020 Chooks-to-Go Pilipinas 3×3 President’s Cup powered by TM, Zamboanga City-Family’s Brand Sardines has aced all of the tests they have faced.

That didn’t change in Leg 2 on Friday, as Alvin Pasaol and Santi Santillan carried the load in Zamboanga City’s gritty 21-11 (7:47) triumph over the Nueva Ecija Rice Vanguards inside the INSPIRE Sports Academy here.

Pasaol scored eight points, the biggest basket being a deuce over the outstretched arms of Tonino Gonzaga. Zamboanga City continue setting the standard in the pioneering professional 3×3 league energized by hydration partner Gatorade.

The Philippines’ no. 2 3×3 player could not have asked for a better ending as he and Gonzaga were at opposite sides of another heated incident.

Santi Santillan dropped five of his seven points in a four-minute span, as Family’s Brand Sardines went on a 12-5 tear to open up a two-point edge to an 18-9 lead.

In the ensuing defensive rebound, Santillan was fouled by Gab Banal. The two then fell to the floor and could not be separated.

Pasaol came close to push off Banal and was then himself warded off by Gonzaga.

Play was stopped for a while as game officials put the newly instituted video review system to good use.

Ultimately, Banal got a personal foul, while Pasaol and Gonzaga were called for unsportsmanlike and technical fouls that canceled out.

Once play resumed, Zamboanga City didn’t let their foot off the pedal even though Banal pulled Nueva Ecija to within eight, 11-19. Pasaol closed the door on them for good with the dagger in the face of Gonzaga’s defense.

PH no. 1 Joshua Munzon contributed four points, while no. 5 Troy Rike also added two of his own.

Zamboanga City continued to rule over the pioneering professional 3×3 league. It has added another feather to a cap that already has titles from the preseason and Leg 1.

Even with the runner-up finish, the Rice Vanguards are P100,000 richer as well since Bounty Agro Ventures, Inc. president Ronald Mascarinas pledged the amount to whoever the opponent is whenever Family’s Brand Sardines makes the Finals.

Banal topped the scoring column for them with seven points. On the other hand, Jai Reyes cooled off quite a bit with only three markers.

The two teams were pushed to the limit even before making the Finals.

Zamboanga City needed a 12-2 run just to get through fired up Butuan City-Uling Roasters, 21-18, in the semifinals. Before that, Family’s Brand Sardines had to top sister squad Bacolod-Master Sardines, 21-16, in the quarterfinals.

For their part, Nueva Ecija needed Reyes’ game-winner to dispatch red-hot Bicol, 21-19, in the quarters. The Rice Vanguards then had to take down history-making Pasig-Sta. Lucia Realtors, 22-13, in the semis.

Nueva Ecija fell short in the Finals, but this remains a promising development after they lost playmaker Juan Gomez de Liaño for the second leg due to a right ankle injury.

Leg 3 of the FIBA 3×3-endorsed tournament kicks off on Sunday still inside the ‘CalamBubble.’