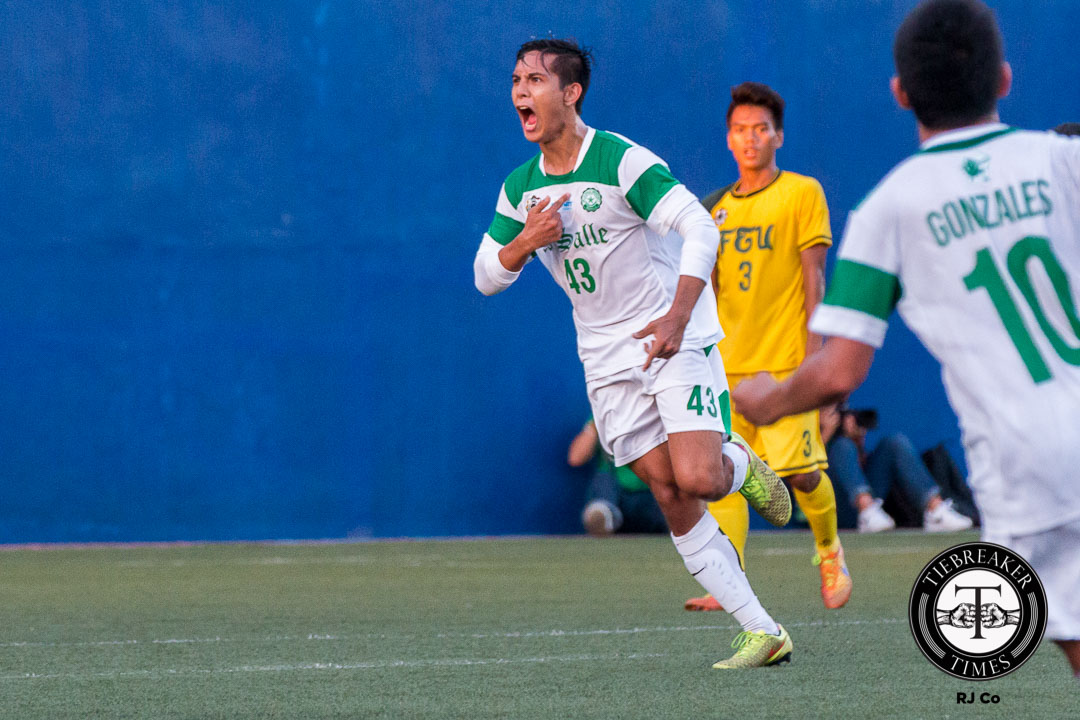 Before last Saturday (April 2, 2016)’s game against the National University Bulldogs, the De La Salle University Green Archers had been in some sort of slump. The Green Archers ended the UAAP Season 78 Men’s Football Tournament first round of eliminations undefeated with six wins and one draw. Come the second round, though, all hell broke loose.

La Salle lost their first two second-round assignments to the Far Eastern University Tamaraws, 0-1, and the University of the Philippines Fighting Maroons, 0-2. While the FEU loss had mitigating circumstances — Jose Montelibano was sent off and besides, to lose by a lone goal against the Tamaraws with only ten men is an achievement in itself — the UP result was unforgivable, as La Salle had had a really bad game.

As for Green Archers striker Rigoberto Joseph, the two losses had been a slap in the face for La Salle. Joseph said, “I guess we just lacked motivation. We lacked focus, but the FEU loss we can’t really blame it on the referee because first of all to play a good game, you shouldn’t allow the referee to manipulate all these calls and make the result from their calls. With the UP game, we didn’t play too well.”

Fortunately, and that is meant with every sense of the word, La Salle came back down from 1-2 to beat NU 3-2 courtesy of two goals in stoppage time. The Archers had a little luck on their side, but luck does not come without persistence. Joseph felt that the win against NU was nothing short of miraculous, and admitted that La Salle have been in something of a slump, but that they just worked hard to win.

After the match, it was clear to the Southridge product what La Salle had displayed. That NU win fortified Joseph’s belief that the Green Archers never give up until the final whistle blows. “If there’s one thing that La Salle’s known for ever since last season, it’s for getting those late goals and never stopping. We just hope to take it game by game, one game at a time. Get the big W and work as a team”, Joseph said.

“I wanna thank the coaches you know. They never gave up on us and even when we we’re trailing, they made the right substitutions and we came up with the win. But you know, a win like this is so rare. You can only credit it to God because without Him, we can’t do any of this”, Joseph added.

Urgency crept into for La Salle before the NU watch. The Green Archers had been in danger of throwing away their good work in the first round, and perhaps felt threatened by the prospect of not qualifying for the post-season. Joseph went further and said the game could have determined their whole season. “Right now everyone’s in the top four, everyone’s fighting. It’s six teams fighting for the top four and everyone’s improving so we have to step our game up now. I hope that us the boys and the coaches, we can do our perfect game.”

On a personal note, it’s been a good season for Joseph. He had minimal playing time in Season 77, but has now started as La Salle’s focal point in attack for numerous games. His only goal, and best moment in the Green Archers uniform yet, came against the first round match against FEU where he scored the winner.

Joseph believes that hard work and the encouragement from his teammates and coaches have been instrumental to his renewed role in the squad. “I just kept going, do some extra work in the gym. I can say I’m more focused. I’ve blocked out all the distractions. I’m really just on the game this season and nothing else. I listen to the coaches all the time, listen to my teammates with what they have to say. Also at the same time I’m closer to God. He gives me the strength all the time when I’m down.”, he expounded.

La Salle still have four more games to play before the Final Four. Six teams have a realistic chance of making it to the Final Four in this cut-throat league. “All we have to do is follow the instructions of coach (Hans-Peter Smit), what he wants from us and I’m just trying my best to do what I can for the team, to make it to the championship and hopefully get the gold”, Joseph noted.

Ah, that championship. Season 77 is still bittersweet for the Green Archers. Joseph is under no illusions as to what La Salle are aiming for this Season 78. “We had a heartbreak loss last year from FEU, but you know it will take time. God’s teaching us patience and hard work and that we’ll do everything that we can to make Him proud, to make each other proud, to make the coaches proud.”

Physicality and hold-up play are just some of the factors Joseph brings every time he plays for La Salle. Goals are the only thing lacking in his arsenal. If he goes on a scoring run for the Green Archers, starting in next game until the end of the season, then the Taft-based squad have every chance to win the long-awaited championship. For him personally, though, that would be a massive step from Season 77.

As if Joseph hasn’t taken one already.