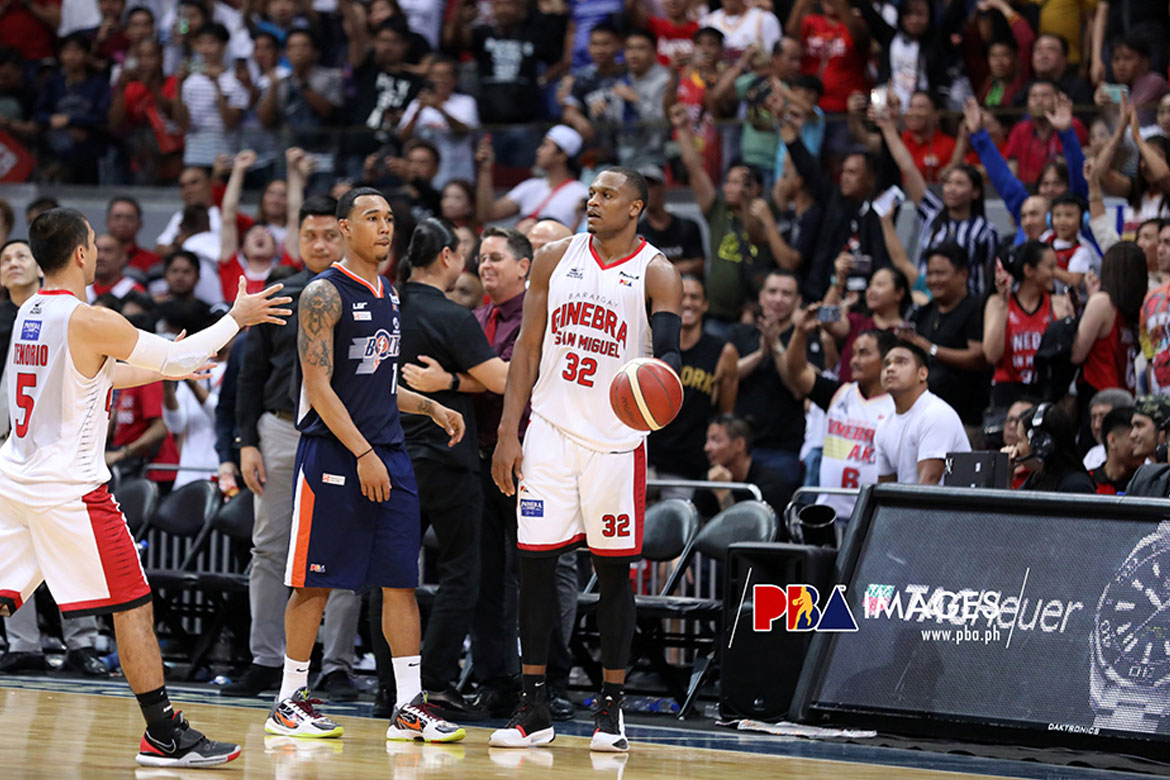 Chris Newsome again found himself on the losing end of the famed Meralco-Barangay Ginebra rivalry.

The Bolts once again lost to the Gin Kings in Game Five of the 2019 PBA Governors’ Cup Finals on Friday. This marks the third time in four years the MVP Group-owned franchise lost to the league’s most popular team in the season-ending tilt’s finale.

“Three-and-O in the finals, that’s definitely not how I envisioned it. But it happens; it has happened,” said Newsome moments after the 93-105 loss.

“But you got to give credit where credit is due also. Ginebra played a really great series.”

But if there’s anything encouraging from the loss, Newsome got it from someone from the opposing squad.

Justin Brownlee — who has now led Ginebra to its fourth title — gave the 29-year-old some words to live by. The two had a moment on the court moments after the final buzzer sounded, and with the whole Barangay in jubilation.

“I had a good time with Justin Brownlee at the end of the game,” the four-year pro out of Ateneo recalled.

Newsome, of course, feels extremely grateful and honored to have received such words from Brownlee, who has strengthened his case even more as the best Ginebra import ever following yet another championship triumph.

“Hearing that from somebody like Justin Brownlee, it was heartfelt. I took it to heart. He’s such a great player,” the 2019 SEA Games gold medalist said.

“He’s probably one of the greatest imports that I’ve ever played against or had to guard. I learned so much just from seeing him and guarding him. For him to tell me something like that meant a lot,” the 6-foot-4 guard added.

Newsome is also thankful that his hard work has been paying off, and that others have noticed.

“It shows that my hard work is actually showing, and people actually see me for the work that I put in. Even though I don’t win championships, they still see the hard work and the motivation and the drive… Everything that I do,” he said.

But at the end of the day, nothing really will ever beat the feeling of winning a championship.

“We’ll leave this one in the past. And if the opportunity comes again to play in another finals, I hope I can get it that time. But until then, I’ll just keep working, keep working on my game.”