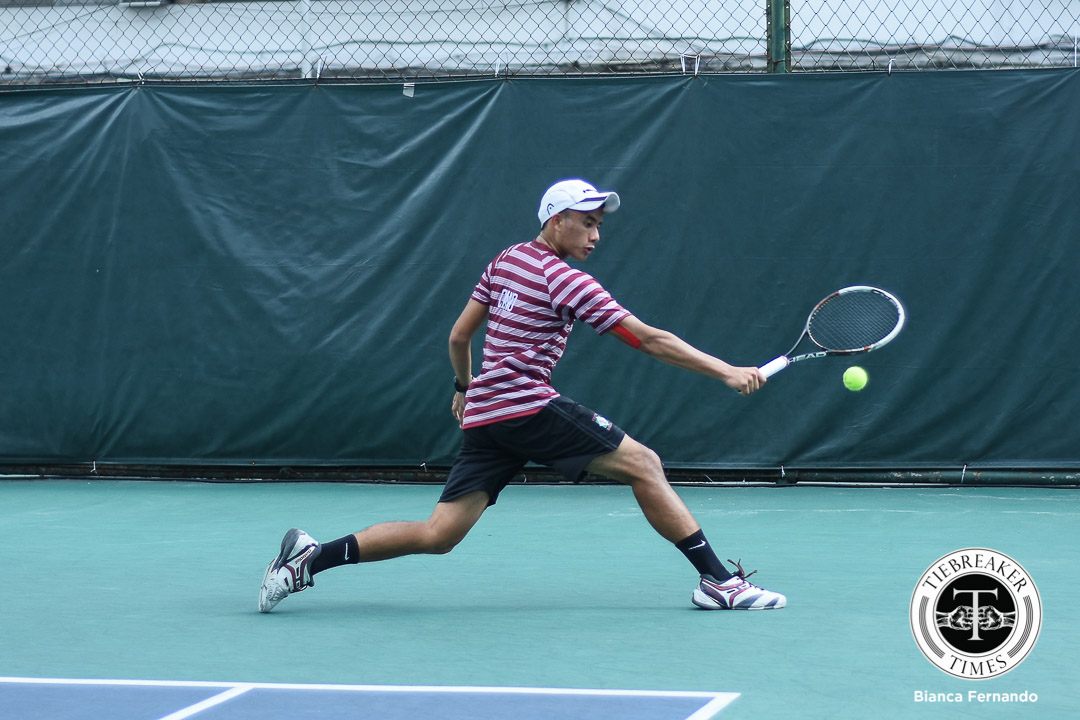 Returning junior player Joshua Cano proved his mettle when he clinched the first two ties of the University of the Philippines Fighting Maroons in the second round in two deciding matches, Wednesday at the Rizal Memorial Tennis Center.

Last Sunday, the Maroons and University of the East started their second round of eliminations with a toe-to-toe battle.

UP veteran Gelo Esguerra pulled through in the first singles match against UE’s Jeleardo Amazona and clinched the match in straight sets, 7-5 6-3. Both players struggled to get ahead in the first set as they traded service holds and serves. Eventually, the fifth-year Maroon took the solitary break advantage, which is enough to win him the opening set. From there, Esguerra never looked back and finished off the following set and the match.

In the second singles match, rookie Vince Salas doubled the lead for the Maroons as he breezed past fellow newbie Jeric Delos Santos, 6-1 6-0. Salas just allowed his opponent a lone service hold and scattered points throughout the match.

However, the Red Warriors took the two doubles matches to level the tie. Rolly Saga and Rogelio Estaño Jr. pulled the rag off Joshua Miranda and Kyle Joseph, 6-3 6-4, in the first doubles match. The Warriors controlled the match from the get-go despite some resistance from the UP pair. Ultimately, Saga and Estaño took home the match up a break of serve in the second.

The other doubles match saw two different sets played, which the UE tandem of Paulo Baran and Rolando Barquin Jr. nonetheless won, 7-6 6-1. The Warriors and the Maroon duo of Gabriel Eduardo Gutierrez and Gboy Mariano duelled to a tussle in the opening set before the former clinched the frame on a rout in the tiebreak. Baran and Barquin then took over in the second set and cruised past the opponents to put the tie on 2 matches apiece.

In the deciding singles match, Cano cruised past last year’s top rookie Josshua Kinaadman at the early part of the first set until the latter made a battle out of it. The early break of serve, however, paid off for the Maroons and they took the first frame at 6-4. Kinaadman leveled the match as his own solitary break advantage in the second set gave him the 7-5 victory, even as darkness beckoned. The two played four more games at 2-apiece before they abandoned the match. Cano, then, finished the job Wednesday morning as he only allowed the UE sophomore lone service hold and took the match and the tie, 6-3.

Cano, UP edge Ateneo to avenge first round loss

With fresh wounds, the UP Maroons turned back one of their first round nemeses, Ateneo de Manila University Blue Netters on a gritty affair.

Esguerra took the opening singles over a tough opponent in Ateneo prized rookie Marcen Gonzales, 7-6 6-3. The first frame rolled on with neither Esguerra nor Gonzales giving the player on the other side of the net the clear advantage. Nonetheless, the veteran experience of the Maroon clinched him the first set. Esguerra the left nothing to chance in the following set and took a double break of serve en route to clinching the match.

On the other side of the Center, the Ateneo tandem of Johann Exconde and Luke Flores turned back UP’s Mariano and Gutierrez in three sets, 7-5 3-6 7-6. The early service break pulled the Ateneans to the opening-frame win, before the Maroons took control of the following set to force a deciding frame. Exconde and Flores threatened early in the third with a service break, until UP made their move and pushed for a tiebreak. Ultimately, the Blue Netters sealed the match with a 7-4 comeback victory in the tiebreak.

Miranda and Joseph turned back Erj Gatdula and AJ Rivero in other doubles match, 7-5 6-3. Another close fight ensued in the opening frame as both pairs exchanged games. The lone break of serve against the Gatdula serve clinched UP the opening set. From there, the Maroons took over and clinched the second set and the 2-1 tie advantage.

It was a nip-and-tuck affair as well in the second singles match, which Ino Canlas eventually won against UP rookie Salas, 7-5 3-6 6-3. Canlas took the first set with a break advantage, and then Salas got his game going in the second set and secured a double break to extend the match. Nonetheless, errors plagued the UP rookie and the third-year Atenean seized control of the set and won the match.

Warmed up with a battle early in the morning, Cano cruised past Iyo Canlas in the opening frame of the deciding singles match, 6-2. The Maroon junior intended to do the same in the second set, but the second-year Canlas had other plans. The sophomore strung four-straight games and forced Cano to serve to stay in the set. Eventually, Cano held serve to force a tiebreak, which he also won.

With the wins, the Maroons took solo second place and will face the dangerous University of Santo Tomas on Saturday, February 20. Ateneo will battle against winless De La Salle University, while UE takes on defending champions National University. The latter two matches will also happen on the same day.