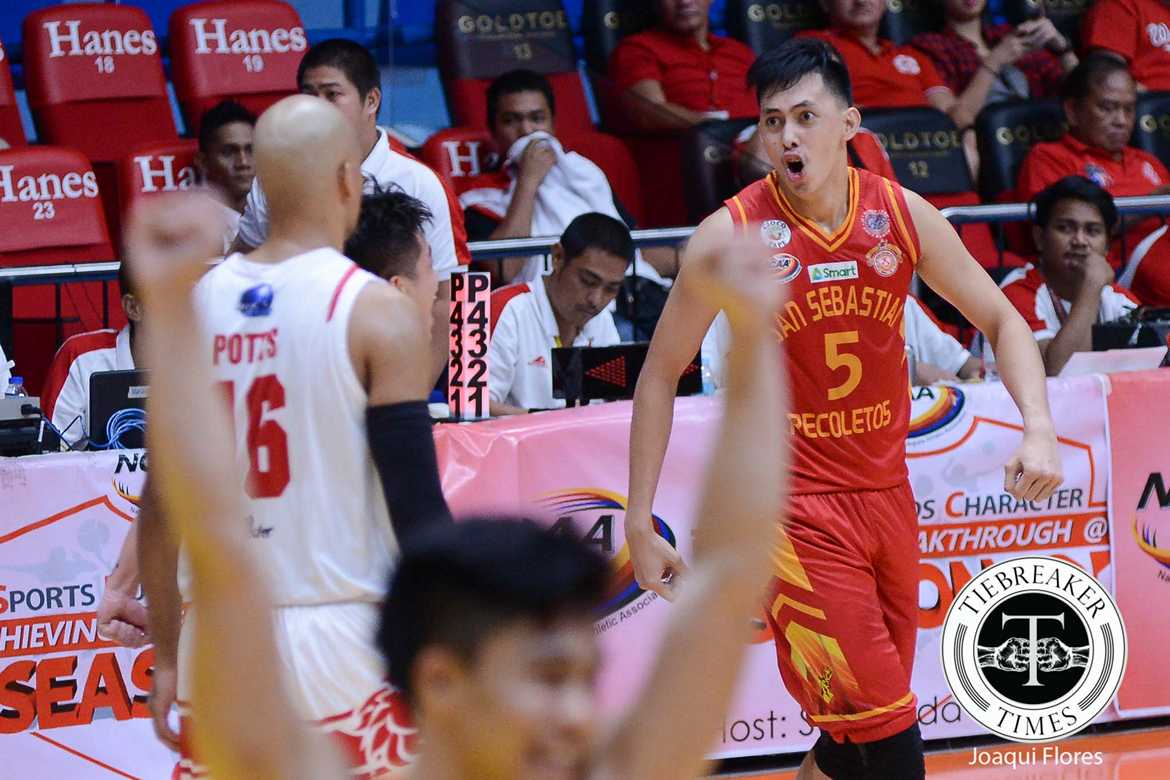 Allyn Bulanadi went from zero to hero in a jiffy.

After committing a crucial turnover down the stretch, luck favored Bulanadi and the San Sebastian College-Recoletos capped by a game-winning pull-up jumper by the 6’2 forward lifted the Golden Stags to a shocking 72-71 win over the San Beda College Red Lions.

The third year Stag overcame poor shooting, dropping nine of his 16 points in the final frame and was able to grab six rebounds. Alvin Capobres added 13 points and seven rebounds while Michael Calisaan notched a double-double with 11 points and 10 rebounds.

“Big victory. The boys didn’t give up,” San Sebastian head coach Egay Macaraya said after the thrilling contest. “I’m very happy because they are showing character right now. They really wanted to win.”

After going down by as much as 12 points in the first half, the Red Lions shackled the the Stags, forcing their opponents to long jumpers. The San Beda lead grew to as high as 14 points midway through the final frame, 66-52, after baskets by Javee Mocon and Dan Sara.

Careless turnovers by San Beda led to a game-changing 16-2 blast by the Stags sparked by an Alvin Capobres basket and capped by a huge triple by Bulanadi to tie the game at 68-all with 1:48 remaining in the game.

The Stags had numerous chances to overtake the Red Lions but misses on the foul stripe by Justine Mercado and a questionable shot by Michael Calisaan failed to do so. The miss by Calisaan led to Mocon being fouled by Mercado, splitting his charities to give the Red Lions a solitary point edge with 28 ticks left in regulation that forced Macaraya to burn his only remaining timeout.

Bulanadi was tasked to inbound the ball after the timeout but the length of Robert Bolick bothered him, committing a turnover that led to a Davon Potts basket five seconds late. The 6’2 wing made up for the error, grabbing his own miss from downtown that led to free throws to keep San Sebastian in the game with 11.1 seconds remaining.

Needing to play the foul game, Ryan Costelo fouled Sara but the King Lion failed to convert. Bulanadi then grabbed the rebound, coasted the length of the court, and knocked down a huge pull-up jumper with 3.8 seconds left to give the Stags a 72-71 edge. Bolick then fumbled the ball, kicking the ball out of bounds as he tried to rush the ball to halfcourt.

However, San Beda missed the services of Donald Tankoua in the game as they were outrebounded 49 to 48 that led to a 9 to 4 second chance points advantage for the Stags. Moreover, the Red Lions committed 24 turnovers in the game.

The San Sebastian Stags (3-9) look to continue its streak on Friday, August 26 against the Mapua Cardinals at 12:00nn. Later in that game day, the Red Lions (10-2) face bitter rivals Letran Knights at 4:00pm.