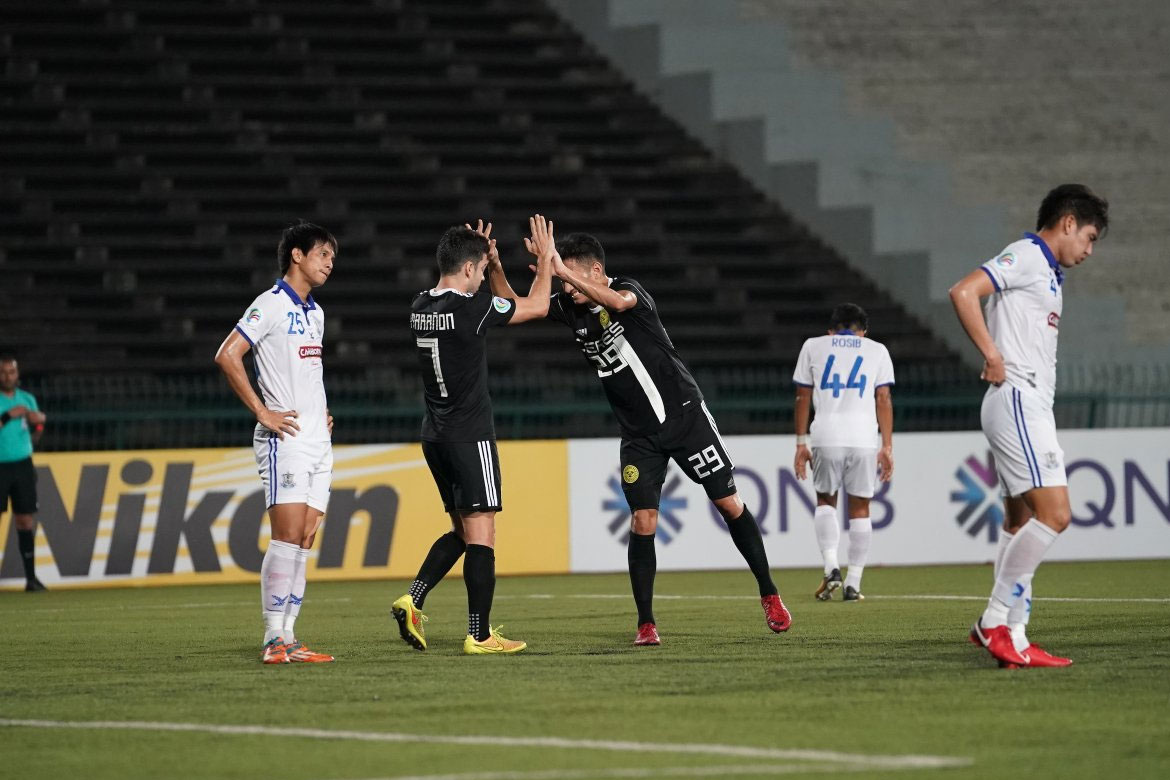 Ceres-Negros collected three valuable points against bottom side Boeung Ket when the two sides met again in Group F action of the 2018 AFC Cup held at the Phnom Penh Olympic National Stadium. The second meeting between the two teams finished 4-0 to the visitors, more than half short of what they accomplished in their first encounter.

Ceres star man Bienvenido Marañon did one better this time, increasing his output against Boeung Ket from two to three by garnering a hattrick in Cambodia. His goals were complemented by Takumi Uesato who notched the game’s last goal – a contrast in their first outing where he opened the scoring.

The Cambodians were well-beaten, 9-0, in Bacolod and were simply determined to not just avoid another drubbing but also alter their fortunes against the reigning ASEAN Zone champions.

Initially, they looked good value to avoid yet another embarrassment as they started the game with the intent of drawing first blood. Yet intentions are only half the part as Julius Oiboh and Maycon Calijuri registered the first two shots of the game from which they were unable to score with. Well aware of their opponents’ might, it’s as good as imperative for Boeung Ket to grab the opening goal.

Eventually, the visitors found their footing in mainland Southeast Asia and began to wrest control of the game. While Boeung Ket remained threatening, Ceres gradually created chances largely thanks to the efforts of Patrick Reichelt, Stephan Schröck and Marañon. They nearly opened the scoring within 23 minutes only for Reichelt to be denied by the post.

It looked as if Boeung Ket would be able to emerge into halftime still level with the Busmen but the Filipinos had other ideas. Marañon got on the end of two well-worked goals in the space of two first half minutes to suddenly put the Busmen away from sight.

Eight minutes before halftime, he finished a chance created by Schröck by guiding the ball into the bottom corner with his left foot. The next minute, the Spanish forward was set up by Reichelt inside the box before using his right foot to strike his second goal of the night. The floodgates looked to have opened at that point. Luckily for the hosts, the scores only remained at 2-0 come halftime.

More relaxed after taking a comfortable two-goal lead, Ceres continued to control the flow of the match. The result looked certain and it was a matter of how many more the visitors can bag past the outclassed home side.

Marañon capped off his hattrick with a sublime finish in front of goal. He had OJ Porteria to thabk this time around as the winger drew the defense’s attention before setting up the forward from Cadiz, Spain.

The goalscoring did not stop there as Uesato joined the party late in the match. Coming on as a substitute, the former JPV-Marikina striker buried one past Sou Yaty who ended the night with an unenviable record of conceding 13 goals against the Busmen.

Only a win by Home United has kept Ceres from advancing into the next round as Group F winners. The Singaporean side’s important win against Shan United meant that they could still overtake Ceres with a win in Bacolod.

Nevertheless, even a loss by Ceres could take them through as the best runner-up in the three ASEAN groups provided they don’t lose heavily at home and hope that not both Persija and Song Lam Nghe An could win by margins huge enough to supersede Ceres’ goal difference in their last group stage assignments. While all of that happening is quite unlikely, nothing is ever impossible in a span of 90 minutes of football.

The two teams will battle for Group F supremacy at the Panaad Stadium in Bacolod on the 25th of April. On the same day, the no-bearing duel between Shan United and Boeung Ket will also take place in Myanmar.