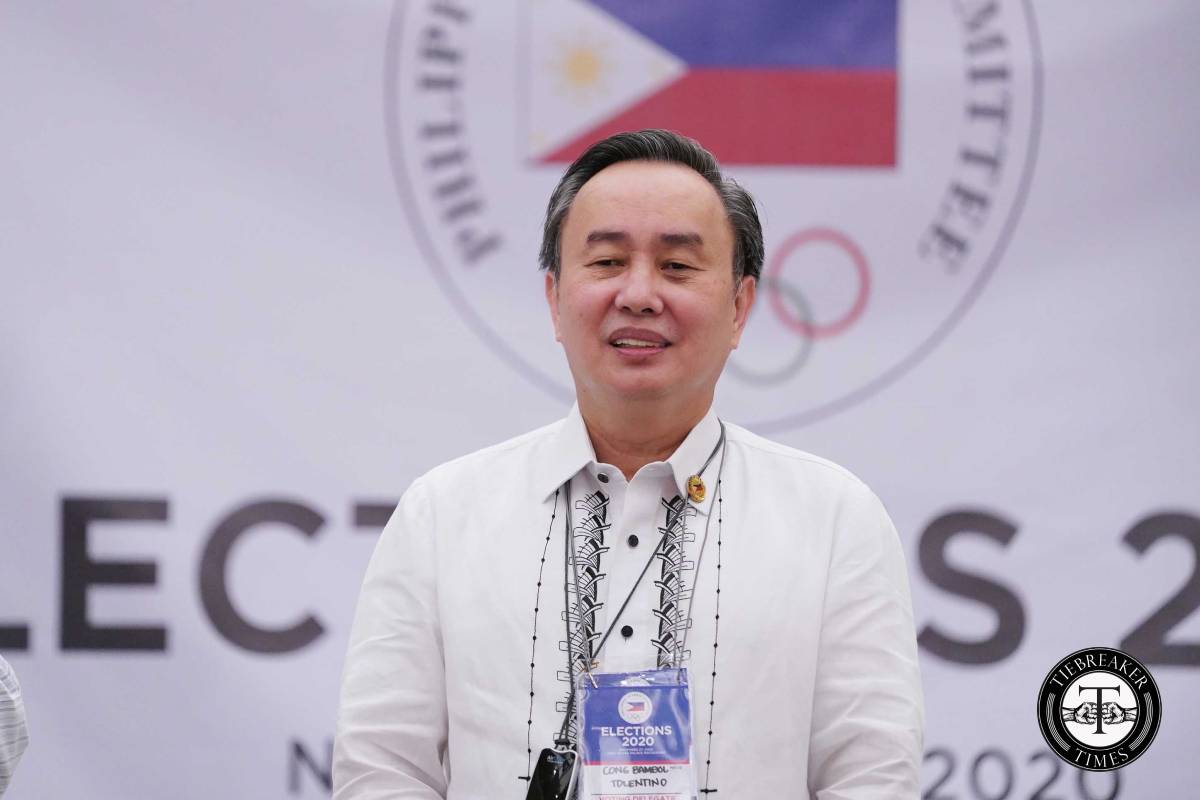 The man who bravely led Philippine sports during its darkest hour is among those to be honored by the Philippine Sportswriters Association (PSA) when it recognizes the top performers and achievers of 2020 next week.

Philippine Olympic Committee (POC) President Abraham ‘Bambol’ Tolentino will be the recipient of the President’s Award during the SMC-PSA Annual Awards Night at the TV5 Media Center on March 27.

Acting in his capacity as congressman of Cavite’s eighth district, the POC chief inserted a P180-million item to the Bayanihan to Recover as One Act 2 that benefitted athletes and coaches belonging to the national team.

Under the House of Representative’s version of Republic Act. No. 11494, members of the national squad began receiving their monthly allowances in full starting November of last year after half of their stipend was cut when the government decided to channel funds to its anti-COVID-19 pandemic campaign.

The passing of the Bayanihan Act 2 also allowed national team members to receive by retroactive, the 50 percent cut from their allowances dating back to July, while at the same time, providing a one-time P5,000 pandemic assistance to Philippine athletes and coaches.

“Even before the din of the victorious Philippine campaign in the 2019 Southeast Asian Games was over, he (Tolentino) proceeded to lead the way for Philippine sports through uncertainty and darkness wrought upon by an invisible and merciless adversity in 2020,” said PSA President Tito S. Talao, sports editor of the Manila Bulletin, on the selection of Tolentino.

“If for this alone, the Philippine Sportswriters Association President’s Award is most sincerely presented to Rep. Abraham ‘Bambol’ Tolentino, president of the Philippine Olympic Committee.”

Tolentino will be among the select special awardees to be recognized by the country’s oldest media organization in the event co-presented by the PSC (Philippine Sports Commission) and Cignal TV, with 1 Pacman Partylist, Chooks-to-Go, and Rain or Shine as major backers.

The virtual Awards Night, hosted by Gretchen Ho and Carlo Pamintuan, will be aired on March 28 at One Sports+ from 7 p.m. to 8:30 p.m.

As a testament to his leadership, Tolentino was given a fresh, four-year mandate following his re-election as head of the country’s Olympic governing body last November. He was previously elected to take over the remaining term of former POC President Ricky Vargas, who tendered his irrevocable resignation in 2019.

Upon his re-election, the POC chief disclosed lobbying in the Senate, through his brother Senator Francis Tolentino, the appropriation of about P900 million funds in the 2021 national budget to bolster the training of the country’s national athletes. A separate version in the House of Representative had earlier been passed.

Before the year ended, Tolentino was again re-elected as head of the International Cycling Federation of the Philippines (PhilCycling).