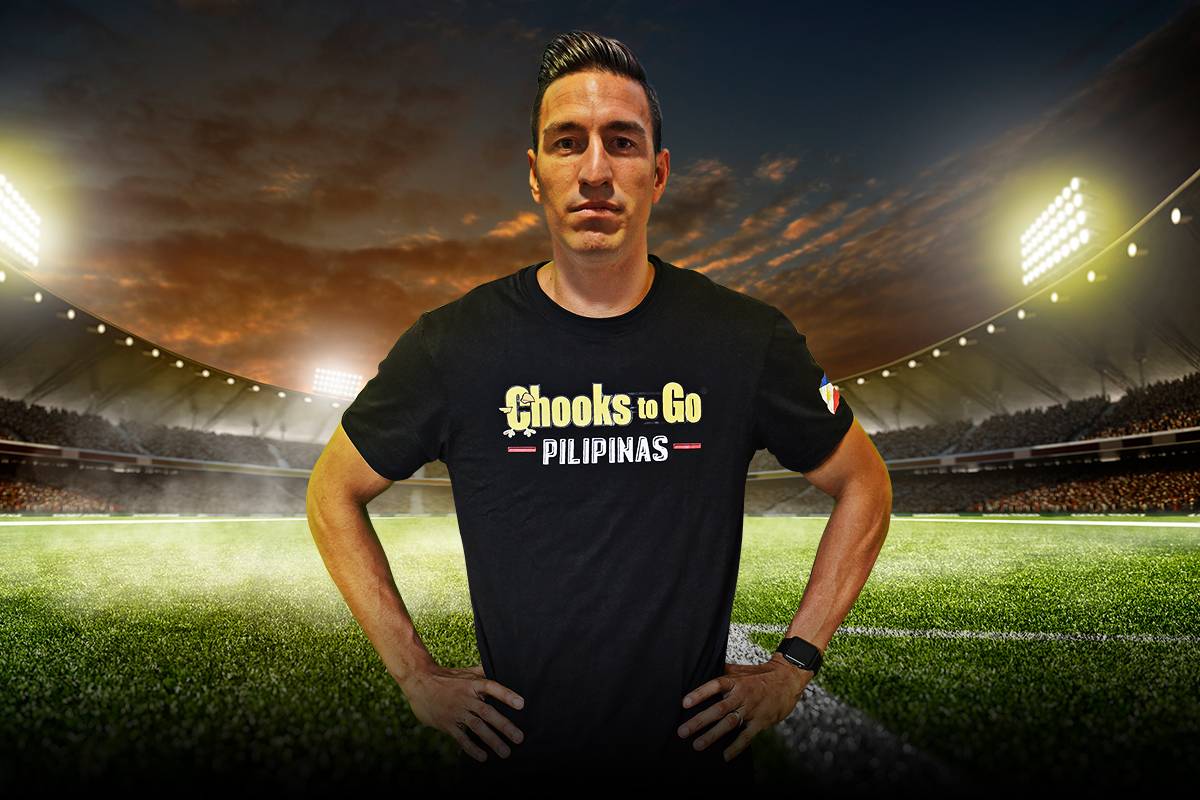 When Angel Guirado steps onto the field for the Philippines’ joint 2022 FIFA World Cup and 2023 AFC Asian Cup qualifying matches against China, Guam, and Maldives next week, he will do so as the country’s most experienced player.

In those 10 years of service, there have been unforgettable highs and memorable lows.

Now, though, he feels renewed zest in wearing the Philippine Azkals kit. He shared as much in the special Chooks-to-Go Crossover: Inside the Azkals Bubble episode hosted by Cedelf Tupas and Mark Zambrano.

“Seeing my age is 36 years old now, but my spirit is still too young. So every time when I come here, I feel like it’s my first day to come to the national team.

“For me, it’s very important, and I really appreciate to call me to play again (for) the national team. Every time when I come I want to give all for my team,” said the former Global striker.

Guirado first played for the Azkals on March 21, 2011, against Laos in a qualifying match 2012 AFC Challenge Cup. He then scored his first two goals for the Philippines four days later against Bangladesh, carrying the team to a 3-0 victory.

A few months later, he scored against Sri Lanka in a packed Rizal Memorial Stadium when the Azkals participated in the first qualification round of the 2014 FIFA World Cup.

In a sense, the 6-foot-3 forward can look back at moments fondly and beg off a call up by coach Scott Cooper.

However, he feels a certain excitement when he receives a call-up for national team duty. At this stage of his career, competing for the country brings huge fulfillment to him.

“Because too many players are coming in, but my experience and my motivation is the same because I represent my country the Philippines.

And Guirado looks forward to seeing new faces like Jarvey Gayoso and Mark Winhoffer whenever he is selected for duty. His name and stature command instant admiration from those who are merely starting out their careers in the senior team; and he is someone they can learn from.

“Like this, helping together is more important because it’s a team. I stay here a long time but I’m no better than him. Everybody’s the same. The more important (thing) is to stay together good, happy and motivated, enjoy and win of course.”

It has been a tumultuous preparation time for Guirado and the rest of the Azkals, to say the least. A lot of players originally listed in the 25-man pool could not make it in the team’s training camp in Doha, Qatar. Meanwhile, the team recently added a few new members so close to the games. Additionally, the matches will now take place in Sharjah, UAE, instead of Suzhou, China.

“It’s a difficult situation for everybody. I’m not thinking too much — I just concentrate on the game and I don’t care about the (circumstances).

“I know it’s very important to follow the rules about the situation, but then you must concentrate on the game and now I don’t know… If you go to training, you’re training good and have good performances… Maybe after the game, after tomorrow and two days, you stay prepared, you know?,” he explained.

Ever the veteran, Guirado’s focus is already on the games ahead against China (June 8; 1:00 AM), Guam (June 11, 10:00 PM) and Maldives (June 15; 10:00 PM). It is all about controlling your destiny on the pitch and the former Cordoba player is looking forward to doing that with his other teammates.

“I think the team is ready for the game.

“I know many rule changes have happened, but when I go to the pitch, everybody is ready; training is good and has good intensity. So I think all the players are ready for the game — I hope. I want to say also about the people in the Philippines to support the Azkals and Philippine football, because it’s very important also for the country come next week,” he said.