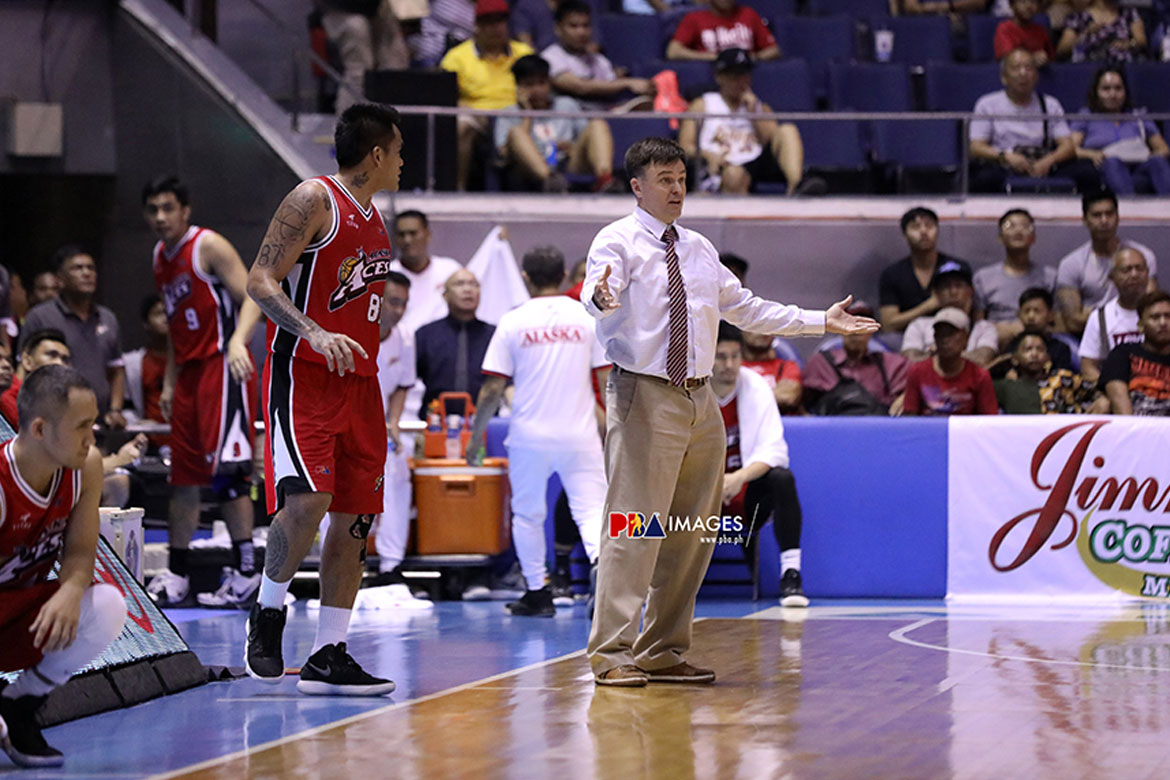 Alaska entered Wednesday’s 2019 PBA Commissioner’s Cup knockout quarterfinal match versus TNT with much confidence, as they were coming off a 36-point demolition of the top-seeded KaTropa four nights ago.

And come Wednesday night, the Aces kept the Texters in check again. Banking on their top-notch defense that often led to scoring opportunities, Alaska led TNT by 15 points twice in the second chapter.

But it was a different story come the next 24 minutes of the game.

Like the top dogs they are, the KaTropa refused to back down. What was once a 15-point deficit became a mere two points at the end of the third quarter. And that was the start of the Aces’ downfall.

Come the fourth quarter, TNT broke loose. Terrence Jones – who was limited to just 19 last Sunday – got his mojo back and took over. He strapped the team on his back, scoring 15 of TNT’s 25 points in the period alone.

TNT completed their comeback and registered the 104-93 win.

Alaska head coach Alex Compton is devastated with the defeat that ended their campaign. For the seasoned bench strategist, he and the rest of the Aces had a strong belief in themselves that they could upset their opponents.

“I don’t know how to explain the feeling, but I just feel sick inside. I know they’re the favorites. They’ve got a twice-to-beat, but I really thought we were going to be able to beat them. But they earned it. They beat us,” Compton said.

For Compton, TNT managed to expose their adjustments, especially on defense. This then allowed the KaTropa to play like the very same team that finished 10-1 in the elimination round, he added.

‘The little adjustments that we made, they exposed. We don’t help on Jones, he scores. We help on Jones, somebody hits a three. In the fourth, we had a really hard time scoring the basketball. We only scored 12 points,” he said.

“That’s just a huge part of it. We just couldn’t knock down shots, and you have to credit them,” Compton added.

“The first half we were able to execute it, and then the second half the team that was ten-one showed up.”

Now, the Aces have an early vacation following the defeat. But Compton admitted that he has no plans for the team during this break prior to the Governors’ Cup, as he focus is on TNT.

“I didn’t plan anything – I planned on winning,” the outspoken mentor said. “I know I’m gonna do my best to sleep at some point when we’re on a break. I thought we prepared our way into a chance to steal this. They earned it.”

But one thing that’s certain now – the Aces have to get better.

“We gotta get better to beat the big boys,” said the fifth-year Alaska head coach. “The big boys are stacked: Talk ‘N Text, Ginebra, San Miguel, Magnolia… [Even] the way NorthPort’s been playing. Those guys are stacked, they’re really good.”

The season-ending Governors’ Cup is about two months from now, and the Aces will be seen as the favorites in that conference following their runner-up finish last season. Given that, Compton hopes to bring back Mike Harris.

“I love Mike Harris. Yes, I hope that we can bring him back. He’s one heck of an individual and one heck of a player. It’s like he’s our version of a Justin Brownlee. Best teammate I’ve ever seen as an import,” Compton said.