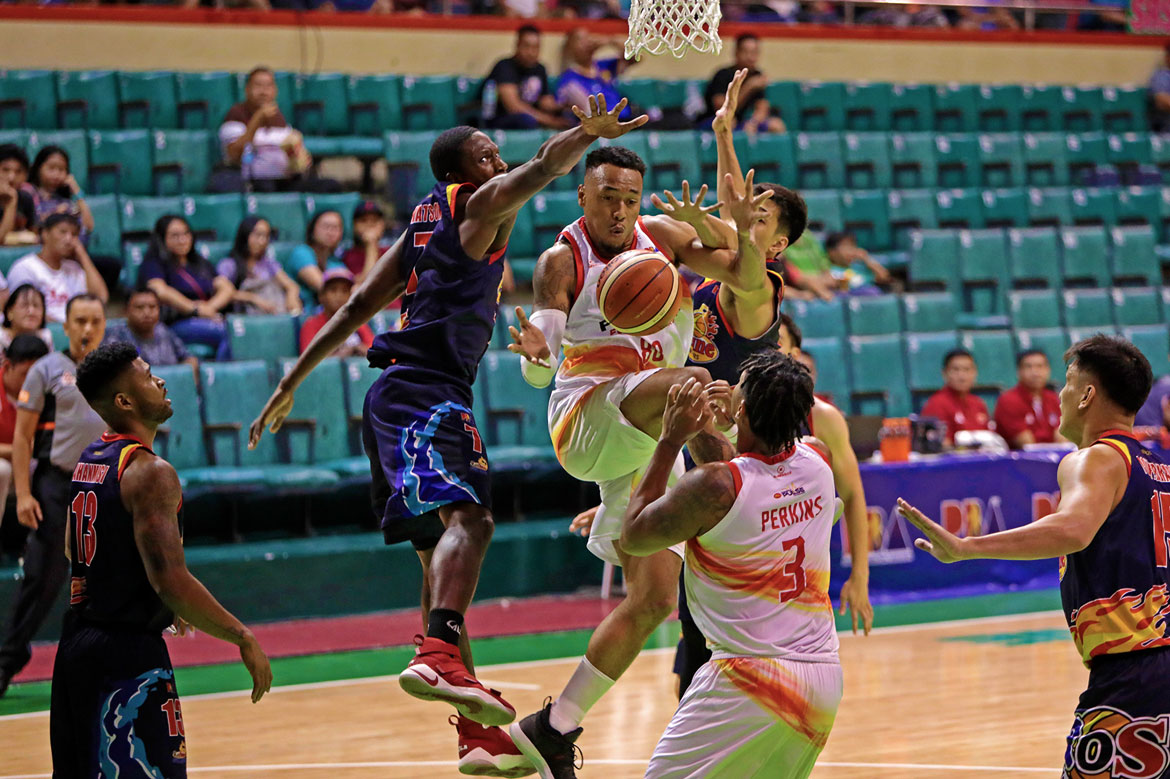 The Phoenix Fuel Masters came back from a huge double-digit deficit to disappoint the upset-seeking Rain or Shine Elasto Painters, 103-97, Wednesday evening at the Cuneta Astrodome in Pasay City.

The Fuel Masters improved to 7-3 to claim the fourth spot of the 2018 PBA Governors’ Cup standings. They  also moved half a game ahead of the Blackwater Elite (6-3), whom they will face on November 4.

Import Eugene Phelps and Calvin Abueva led Phoenix with 18 points apiece, with the former adding 20 rebounds, seven assists, and five blocks. Abueva, who shot 6-of-12 from the floor, had 12 rebounds and two steals to his name.

Alas’ disappointment stemmed from the way his wards had played in the third quarter, as they allowed the Elasto Painters to inflate their narrow five-point cushion to a 16-point advantage, 71-55, after Chris Tiu’s freebies with 9:36 left.

But Phoenix made up for it in the final frame. Down by 10 entering the canto, the Fuel Masters pulled off a whopping 19-6 blitzkrieg – punctuated by rookie Jason Perkins’ lay-up – to take the upper hand, 93-90, with 4:32 remaining.

The Elasto Painters still managed to knock within a solitary point twice later on, but the door closed on them as LA Revilla made a booming triple from the right corner to give Phoenix a 98-93 cushion with 1:16 left to play.

“Ilang games na ganyan laro ni LA. Yan naman hinahanap namin sa kanya, so let’s give it to him,” lauded Alas of the La Salle product, who had 13 points, six assists, and four rebounds in the 26 minutes and 16 seconds he played.

Still, the seasoned Alas insisted that it wasn’t a victory he can be happy about, as they can’t afford to play the same way once they go head-to-head with the Elite, who are also aiming for a Top Four finish for the playoffs.

“Honestly if we play the same way against Blackwater, we can’t win. Lots of bad habits. We have to check it,” he said.

Rain or Shine’s loss wasted the new career-high outing of Chris Tiu, who had 24 points on 50 percent shooting. Tiu set his previous career-high of 23 markers exactly seven days ago, also at the same venue versus the NorthPort Batang Pier.

James Yap had 14 points, while Jewel Ponferrada made 11 and five boards for the Elasto Painters, whom the Fuel Masters have not beaten since last season, according to the league’s stats chief Fidel Mangonon.

Terrence Watson – who fouled out with 2:19 left to play after being called for a blocking foul on Perkins underneath the rim – wasn’t in his element as he only had four points, seven rebounds, three blocks, and a steal.

Rain or Shine will next face the San Miguel Beermen on Saturday, October 27, in Biñan, Laguna.

READ  After heartbreaking end to D-League campaign, Allyn Bulanadi vows to bounce back

Paul Desiderio says UP no longer about ‘Atin ‘to’: ’16 strong na’