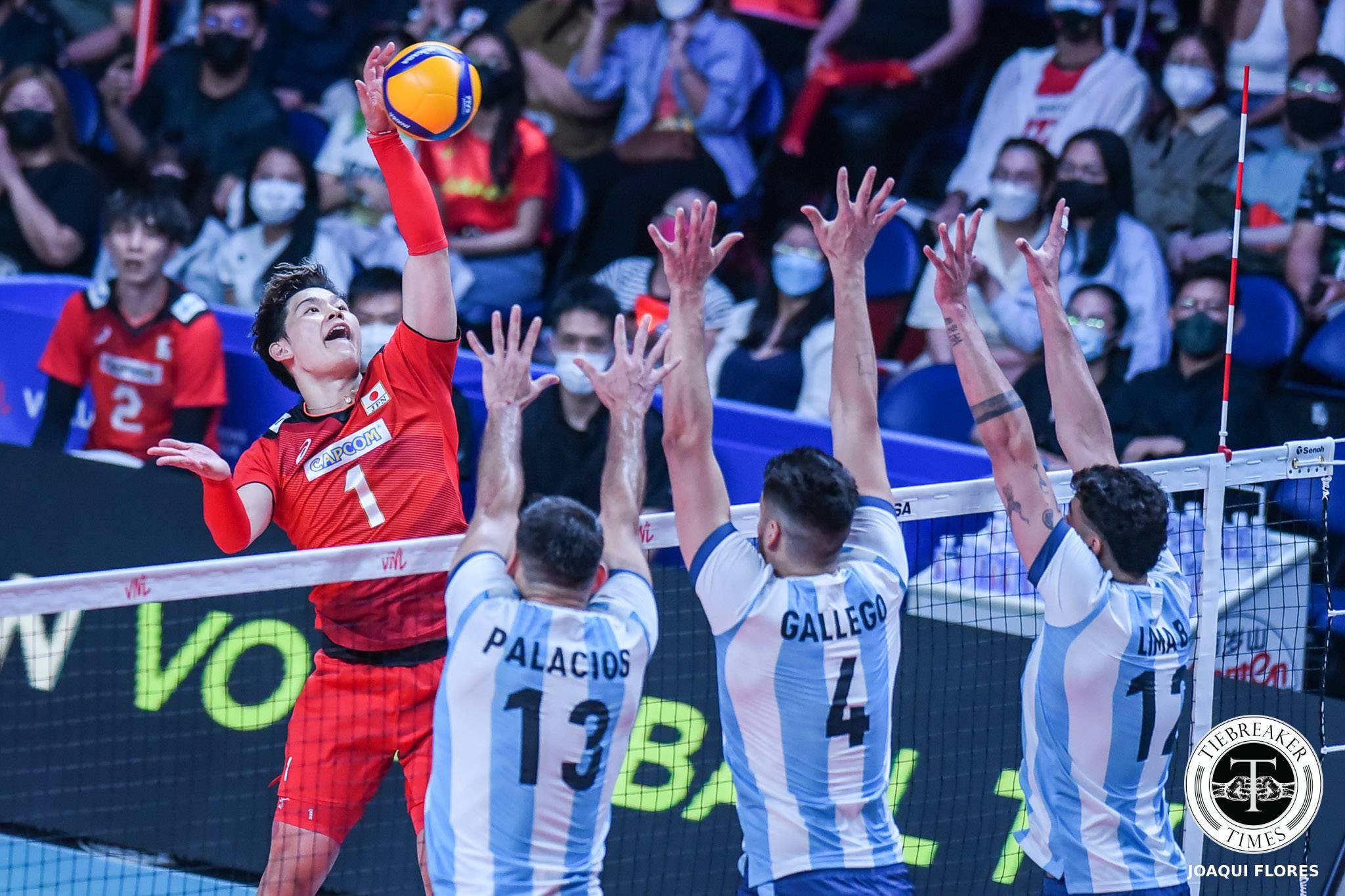 Japan turned back a slow start and carved a huge four-set win over Olympic bronze medalist Argentina, 27-25, 25-18, 17-25, 25-16, to take its second straight win in the 2022 FIVB Volleyball Nations League, Tuesday evening at the SMART Araneta Coliseum in Quezon City.

Japan cruised into the lead at 12-7 in the fourth set, capitalizing as well on Argentina’s hitting and service errors. With their own offense clicking on all sides, Japan eventually ended the set and the match on yet another service fault from Argentina.

The world no. 10 squad avenged its latest loss against the Argentines in last year’s edition of the VNL, where they suffered a sorry four-set defeat despite taking the 1-0 lead with 32-30.

The win also saw Japan go up to 4-1 and just half a game behind the undefeated USA side, who are at 4-0.

Opposite hitter Yuji Nishida lit up the scoreboard with a total of 25 points on 20 attacks, two blocks, and three service aces.

“This match is a very tough game, a very different game. It is a very important game for us, so we are very happy to get that win,” the Japanese ace said.

Nishida also made up for his absence in that most recent match as he was still nursing an injured ankle. He also added, “Argentina is a strong team and very quick on defense, so it was important for us to keep our mentality and focus on the match to win.”

Argentina was off to a hot start, scoring in transition to build an early 6-1 lead in the first set. Japan, though, quickened the pace and slowly crept into the set, eventually putting it at a 25-all deadlock.

Nishida then took over for the Ryujin Nippon on back-to-back points on the attack and then on serve to snatch the frame, 27-25.

Japan used this momentum into the second set as their improved passing got their offense going with Nishida and Kenta Takanashi leading the way. Masahiro Sekita then activated all his points of attack for a solid 2-0 advantage.

With some sense of urgency, Argentina cleaned up their own passing lines in the third to mount a huge lead that they did not relinquish this time, getting on the board with 25-17.

Captain Yuki Ishikawa finished with 18 points, most of it in that huge fourth-set takeover, 15 coming from attacks and three service aces. Middle blocker Akihiro Yamauchi also provided the spark, ending with seven spikes, two blocks, and a service ace for a total of 10 points.

Bruno Lima paced Argentina with 18 points on 17 attacks and one block, while Ezequiel Palacios added 13 markers, all coming from attacks.