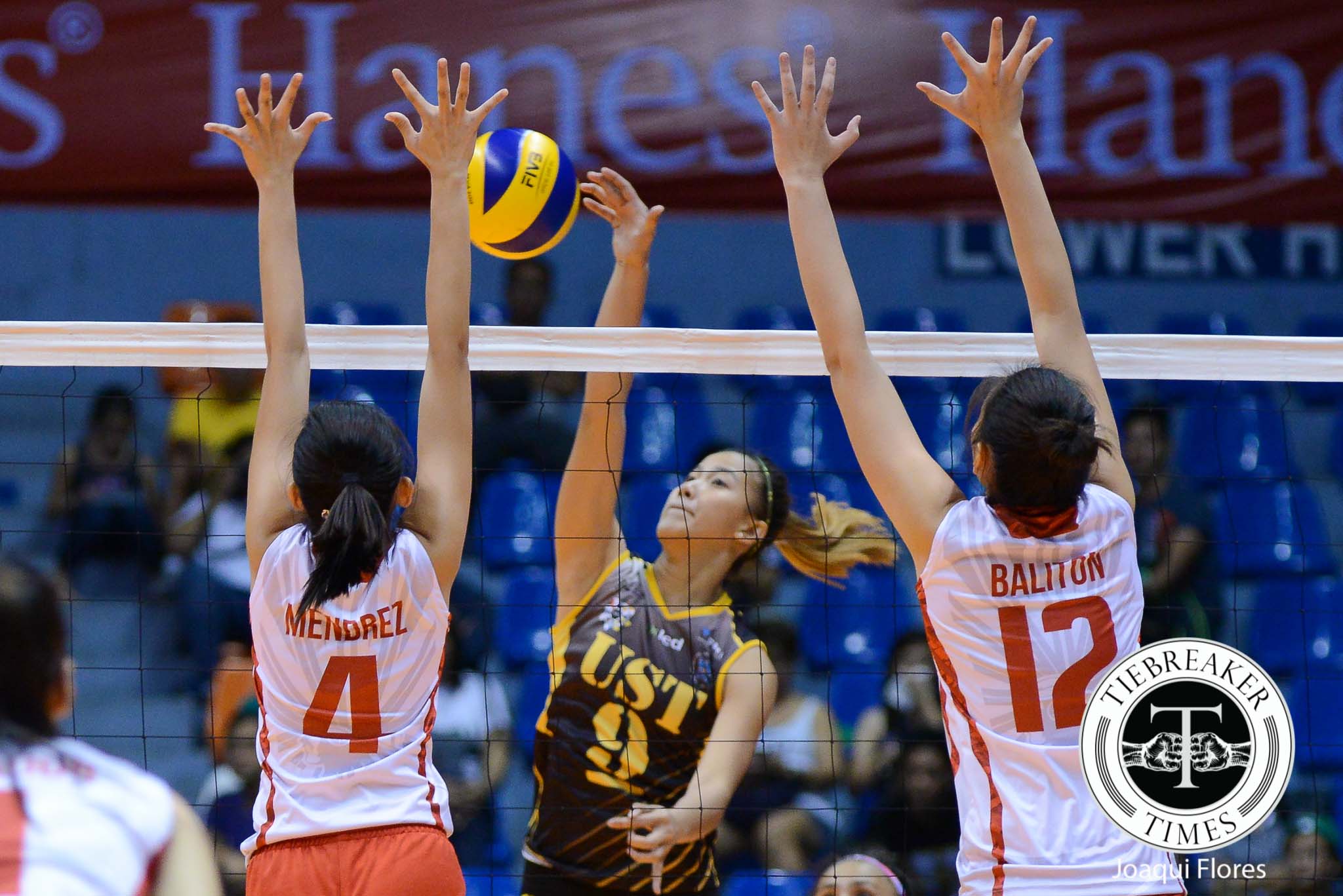 The University of Santo Tomas Growling Tigresses took their second straight victory as they doused a fiery University of the East squad in straight sets, 25-17, 25-23, 25-16, Saturday afternoon at the Filoil Flying V Centre.

The Growling Tigresses got off to a hot start in the opening set, jumping to a quick 10-3 lead and forcing UE’s coach, Francis Vicente, to call a timeout. UST were able to maintain their sizeable advantage over their opponents throughout the set. Chloe Cortez’s consecutive kills gave UST set point, 24-15. Third year Lady Warrior Shaya Adorador attempted to prolong the set, scoring on a tip, followed by a service ace. UST, however, had other plans, as Cortez scored once more to end the set.

UE took control early on in the second set, taking advantage of UST errors to mount an 8-4 lead. UST eventually went on a 9-3 run to take the lead, 18-16. UE fought back, with Judith Abil scoring consecutive points. UST’s Christine Francisco and Chloe Cortez committed attack errors to give the Lady Warriors a slim 22-21 lead, forcing a UST timeout. UST used this to get their heads in the game, eventually scoring four of the last five points of the set to take a 2-0 set lead.

The Lady Warriors once again took an early lead in the third set, with Abil scoring off the block and team captain Celine Domingo notching a block kill for a 3-2 UE lead. Just like the previous set, UST came alive, with EJ Laure, Mela Tunay, and Ria Meneses igniting a 7-0 run to ruin UE’s chances in the set. From there it was just a matter of time before UST took the match.

UST were led by EJ Laure’s 15 points, 14 coming off spikes and a single block kill. She was supported by Rondina, who chipped in 12 points and 7 digs.

No UE player scored in double digits; Adorador scored 9 points while Abil had 7.

After the match, UST head coach Kung Fu Reyes was already thinking of his team’s next opponent, the De La Salle University Lady Spikers. Having pulled a straight-set victory over the former champions, Reyes knows that the Lady Spikers eagerly await their rematch.

UST’s match against DLSU will be on Saturday, March 12, 4pm at the Filoil Flying V Centre.

On the other hand, UE go against the Far Eastern University on Wednesday, March 9, 2pm at the MOA Arena.