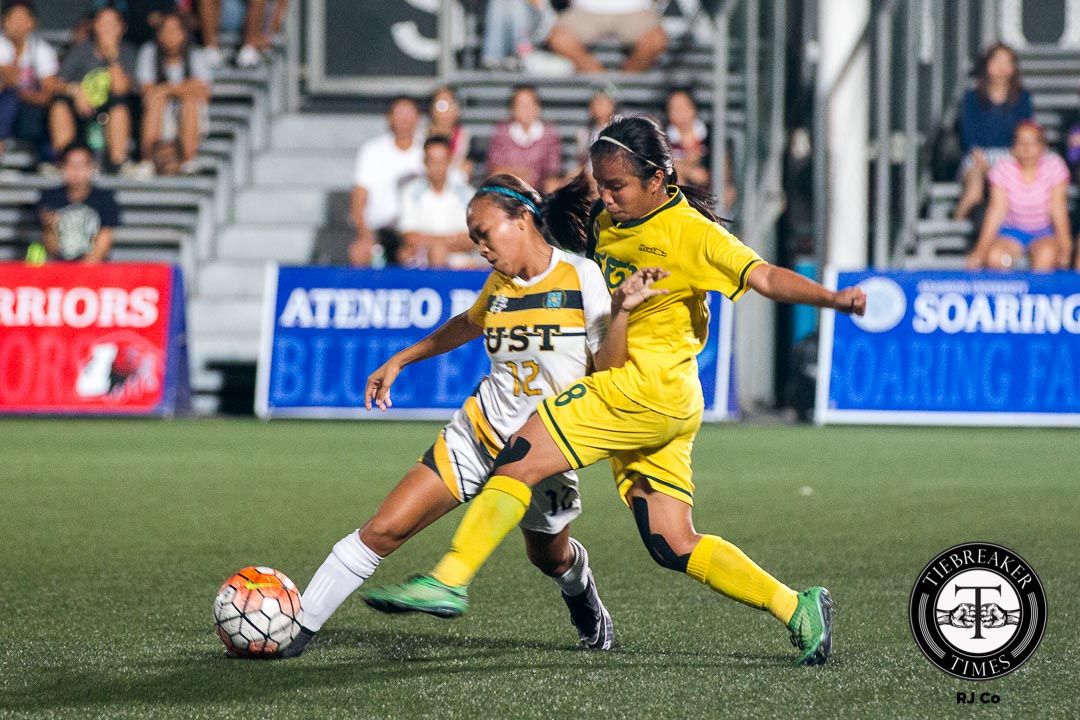 At a stage when dropping points is a big let-down, both the University of Santo Tomas Growling Tigresses and Far Eastern University Lady Tamaraws ended ninety minutes goalless in what was an entertaining UAAP Season 78 Women’s Football Tournament second round encounter at the McKinley Hill Stadium in Taguig. The result left FEU at 3rd place with 8 points, while UST were still stuck at 5th place with 4 points.

The first half was very much an even contest. The two teams had equal amounts of possession and both created chances to threaten breaking the deadlock. Perhaps it was FEU who should have broken the deadlock sooner when both Marie Lecera and Sharmaine Siaotong had chances in succession in front of goal, but somehow and someway, the Lady Tamaraws failed to direct the ball home. Moments later, Jovelle Sudaria intercepted the ball at a dangerous position, only for UST goalkeeper Ivy Lopez to deny her with a fine save.

At the other end, UST threatened to break the stalemate themselves. A scramble in the FEU box ensued and then UST’s Neriza Cuaresma had her header deflected out in the following play. Eventually, the Lady Tamaraws cleared the danger. It would prove to be a momentary struggle for FEU as they soon controlled the game afterwards.

Only a goal was lacking when FEU had the momentum. Lopez protected the UST goal well with routine saves against Jovelle Sudaria, Kimberly Cupal and Barbie Sobredo. Aloha Bejic joined in the FEU bombardment, except that she failed to hit the target during her two attempts. That’s not too say, though, that FEU goalkeeper Kim Parina was a spectator. In the midst of FEU’s run, Parina easily caught the shots of Kate Aguilar and Chanda Solite. Mae Cadag then shot wide in what was a very difficult angle. It ended, 0-0, at halftime in what could be said was a fair complexion of the match.

A similar story unfolded in the second half. Possession, again, was very much shared between FEU and UST. Although, FEU struggled to create any attempts on goal at the start of the period while UST made theirs. UST striker Charisa Lemoran found herself through, only for her to to strike the ball tamely under pressure. Solite then stepped up to take a free kick and only the crossbar denied her and the Growling Tigresses the opening goal.

After Solite’s attempt hit the crossbar, the Lady Tamaraws finally threatened the Growling Tigresses’ goal. Just like in the first half, though. Lopez was on hand to make simple saves against Sobredo and Sudaria. Perhaps some crispier finishing would have gone a long way in helping both teams score. Sudaria then had another attempt herself when she received Parina’s long ball, but her shooting failed her.

Both teams still pressed on for the winner. It was very much back-and-forth football. A little patience could have helped, although it made for an entertaining game nonetheless. UST had another free kick which was taken this time by Nina Acuna who then failed to score. In what was perhaps the Growling Tigresses’ best chance of the match, Lemoran received a pass inside the Lady Tamaraws box. With all the time and space, Lemoran squandered it and shot wide. It may have been a sign of fatigue since the game was played at a frenetic pace.

And then another chance came past UST’s way. Another one they should have buried. With the Parina only to beat, the UST forwards directed the shot towards the said goalkeeper, who in fairness set herself up well to defend the goal. A corner then ensued for the Growling Tigresses and a shot was made, nevertheless, FEU cleared their lines.

Not to be pegged back, FEU still committed players forward. Alesa Dolina released a shot from outside the box, Lopez, though, was relatively unharmed and parried the ball to safety. In the end, though, the referee blew the whistle for full-time with both teams left frustrated that they couldn’t score the solitary goal needed to win the match.