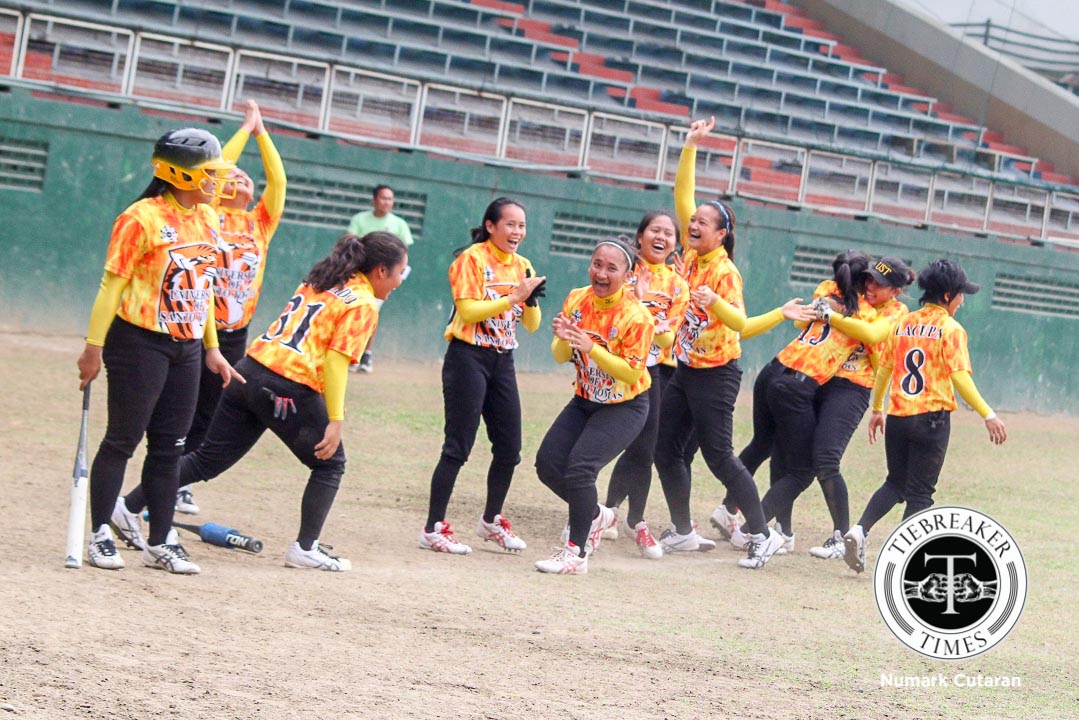 With odds against them, the University of Santo Tomas Tiger Softbelles accomplished what 6 teams had failed to do in 73 games, and silenced the five-time defending champions Adamson University, 6-2. UST have forced a Final Four and, consequently, a play-off for the second twice-to-beat advantage, Wednesday at the historic Rizal Memorial Baseball Stadium.

UST started off the onslaught right at their very first turn at bat. After taking eight pitches, Kristine Lacupa got a free pass off a fourth ball from Adamson starting pitcher Annalie Benjamen. Cleanup batter Celestine Palma then fired a double to right-center to score Lacupa for the breakthrough run.

After a scoreless second inning, UST were able to consolidate a 1-2-3 defensive side in the third with three more runs.  Palma registered her second double of the game to send Lea Guevarra home and double the lead for the Lady Tiger Softbelles. CJ Roa followed this up with a ground-rule double and Palma padded the lead, 3-0. Garde opened the floodgates for the España-based team with a booming triple to the left and Roa crossed past catcher Angelie Ursabia for their fourth run. Adamson Head Coach Ana Santiago attempted to arrest the slump by sending in Riflyca Basa to the mound. Adamson shortstop Queeny Sabobo stopped the bleeding as she threw to Riezel Calumbres and retired Charm Oria.

Needing a run, Sabobo started their side of the fourth inning with a double. However, with base running coach’s signal, the veteran shortstop attempted to reach third. Nonetheless, UST’s defense played heads-up and tagged Sabobo on second. Gelyn Lamata reached first base after four balls, but it was all the defending champions could do as they registered another scoreless inning.

Sensing blood and with tiger-like instincts, the UST Softbelles threatened to end the game early. Precious Areglado started their end of the fourth inning with a base hit, and Guevarra followed her on base after being hit by pitch. With two outs, Hannah Dela Torre sent a hot grounder to score Aregaldo. Palma almost picked off another RBI double, but the first-base umpire adjudged that the UST veteran missed stepping on the first base, nullifying the run scored by Guevarra.

With their backs against the wall, Sabobo made up for her mistake in the previous inning and sent a cannonball hit over the left fence for a solo homer, putting Adamson on the score board, 6-1. UST, nonetheless, buckled down on defense to waive off the impending Falcon rally.

Three more outs and UST could have finished the game and the 73-game win streak of the reigning champions. The Lady Falcons, however did not back down easily. A Covarubias double gave the San Marcelino squad some lease of life. Krisna Paguican and Calumbres then loaded the bases for Sabobo. The Thomasians cleverly allowed a Sabobo walk and consequently an Adamson run. With Benjamen at bat, third baseman Guevarra composedly collected the grounder and beat Lorna Adorable to the base.

With that final out the Tiger Softbelles duplicated the feat that their UAAP Season 73 iteration had done – beat an Adamson Lady Falcons squad.