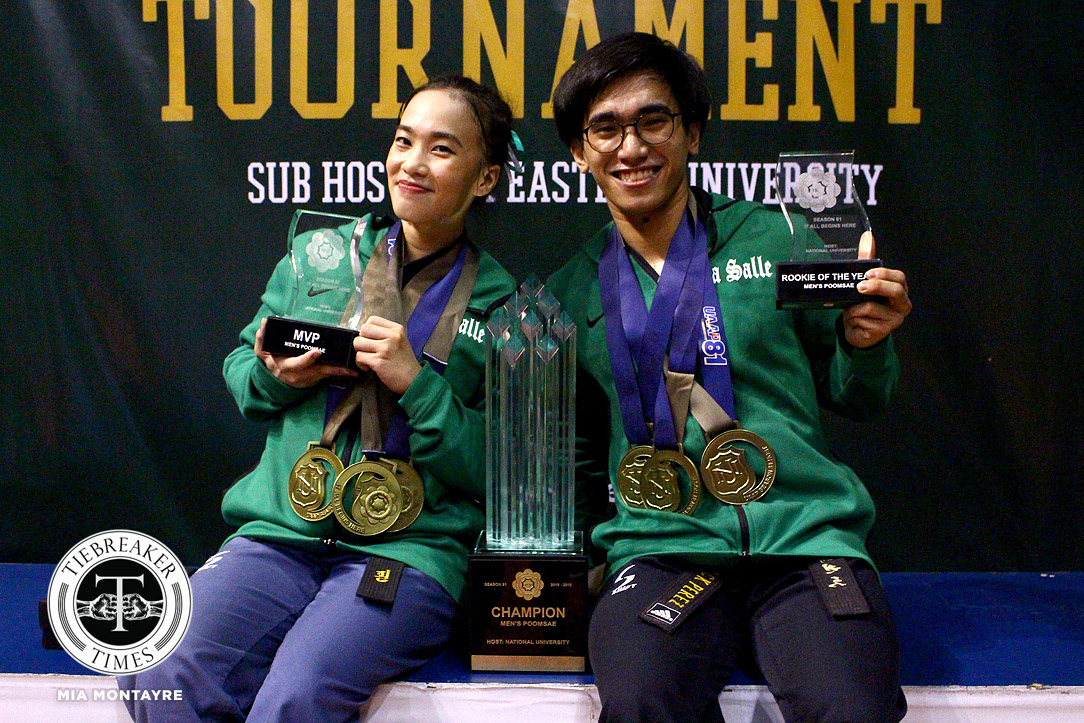 A graduating standout and a prized recruit carried the De La Salle University back to the throne.

National team members Rinna Babanto and Patrick Perez brought the title home to Taft, as they took the first three golds at stake at the UAAP Season 81 poomsae championships, Tuesday evening at the Blue Eagle Gym in Quezon City.

In perhaps the first time that the event was held in the late afternoon, nothing unexpected happened, as the traditional powerhouses strutted their stuff led by the Green Jins.

Babanto opened the day by regaining the individual female gold over fellow members of the 2018 Asian Games bronze medal squad in University of the Philippines’ Nikki Oliva and Far Eastern University’s Juvenile Crisostomo. The senior Lady Green Jin showed her excellence in the two poomsae required in the medal rounds with 8.180. Also on her last playing year, Olivia missed the mint by 0.080, after finishing at 8.100. Crisostomo – likewise in her last individual event for the Tamaraws – ended with 7.900.

For his part, rookie Perez overwhelmed his rivals in the individual male event after ending with 8.305 in the finals. Adrian Ang took home the silver for the University of Santo Tomas at a distant 8.150, while National University’s own newbie Kier Macalino took home his school’s first individual medal at bronze with 8.035.

Perez and Babanto then teamed up for the mixed pair title, besting Jerel Dalida and Cyrinne Abenir of UST and Jayboy Buenavista and Patricia Jubelag from UP. The duo of eventual Rookie of the Year and Most Valuable Player walked away with 8.235 over the Thomasians’ 8.200. The Fighting Maroons tandem ended in third with 8.015.

With the title decided, the two other former champions sent off their seniors in style.

The Maroons reclaimed the team female gold after ceding it last year to FEU. The trio of Oliva, Jubelag, and graduating senior Aina Callos got their second mint in three years after getting an 8.220 mark. The team of Erin Salceda, Nasstassia Limos, and Jaeb Viterbo rose from third in the semis to the silver in the finals with 8.130, while NU’s Cherrie Teraytay, Joy Mateo, and Denise Alicias slipped to the bronze with 8.000.

UST had the last gold of the day, giving them the second place overall, and pushing UP to third for this year. Ang, Dalida, and Miguel Baladad finished with 8.255 for the title. Fourth-seeded La Salle snagged the silver as Enrico Mella, McAvyngyr Alob, and Ignacio ended with 8.050 in the finals, dragging Lyan Llanto, Roman Sta. Romana, and Juan Sandoy to the bronze at 7.950.

With shortage of players last year, La Salle team captain Babanto felt it was understandable for them not to retain the crown. “Lahat nag-perform naman, pero nagkulang lang ng kaunti,” she admitted.

This is La Salle’s second championship this season and second overall in poomsae.