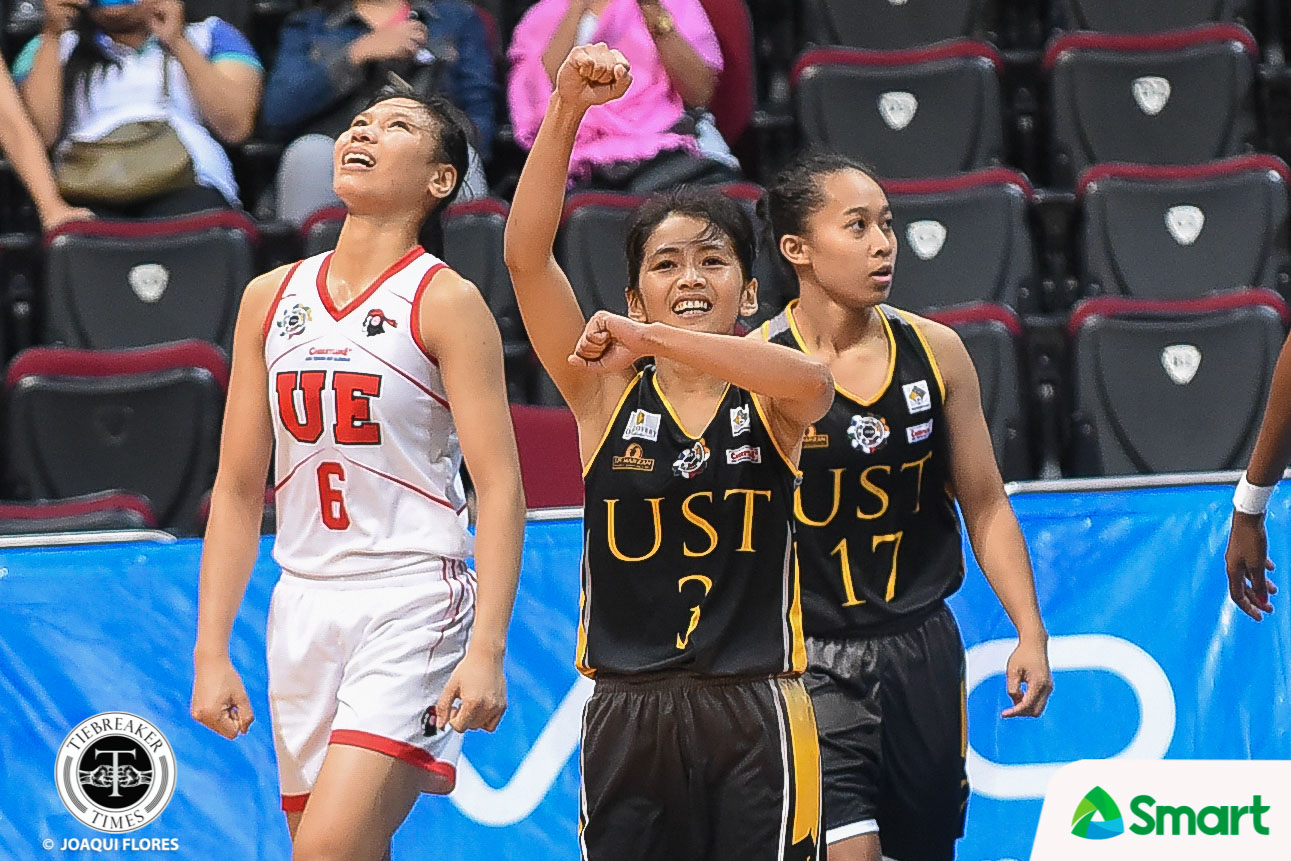 Tin Capilit’s Hail Mary basket in the final seconds of the contest proved to be what the University of Santo Tomas Growling Tigresses needed to fend off the pesky University of the East Lady Warriors, 53-51, Saturday morning at the SM Mall of Asia Arena in Pasay City.

The result allows the Growling Tigresses to end the UAAP Season 81 Women’s Basketball Tournament first round on a high note with a 4-3 record, while the Lady Warriors are in unfamiliar territory with a 1-6 tally.

“I’m not happy,” commented UST mentor Haydee Ong. “We turned the ball so many times. I think we have to work harder on our half-court defense going to the second round. What’s good is that we’re one win away from La Salle and FEU so I think we are still in contention for the Final Four.”

And it’s because of Capilit’s heroics.

Capilit sunk a basket off a broken play to hand the España school a 53-51 separation with 7.7 seconds left. UE coach Aileen Lebornio then called for time to setup a play, but the Lady Warriors fell to a Growling Tigresses defensive stop as the latter survived with the win.

“Hats off to Capilit. She made us win today because of her winning basket,” said the former national team head coach as Capilit finished with 13 points.

UST looked set to win when Sai Larosa’s lay-up provided the Growling Tigresses their biggest lead of the ballgame, 46-34, early in the final period. However, Christine Cortizano’s freebie capped off a 15-3 for UE to trim the deficit to 49-51 with 1:21 remaining in the game.

Ong then called for a timeout, but her wards botched the play and turned the ball over, which led to an Anne Pedregosa lay-up that tied the ballgame for the Lady Warriors at 51-51 with 57.5 ticks left.

Nevertheless, UST found a way to rescue the victory.

Larosa powered UST with 13 points, 14 boards and six dimes. Grace Irebu had a quiet game for her standards with seven points and 13 rebounds. Carolina Sangalang also contributed eight rebounds for the UST cause.

UST dominated the boards to seal the important win. The Growling Tigresses coughed up 58 rebounds, 27 of which were at the offensive end, alongside 17 second chance points. In contrast, UE mustered 45, 17, and six respectively.

Anne Pedregosa’s monster game of 20 points and seven rebounds all went for naught, together with Anna Requiron’s 14 markers and 12 rebounds. Princess Pedregosa also had 12 rebounds for the Lady Warriors.

“I hope we’ll play better in the second round,” concluded the former national team coach, who referenced UST’s 28 turnovers.