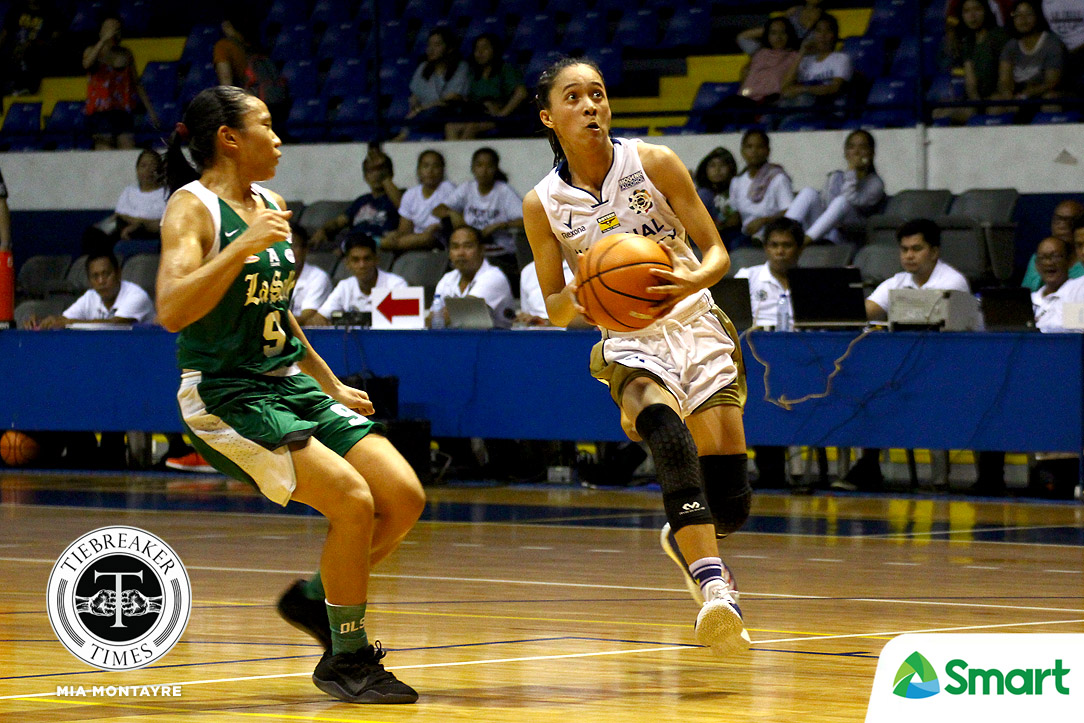 The National University Lady Bulldogs are simply light-years ahead of the University of the Philippines Lady Maroons.

The defending champions cruised past the Lady Maroons, 106-49, for their fifth win in the UAAP Season 81 Women’s Basketball Tournament at the Blue Eagle Gym in Quezon City.

The result allowed NU to prolong their streak to 68 consecutive victories.

NU’s big three of Jack Animam, Ria Nabalan, and Rhena Itesi saw limited time in the blowout. Nabalan, who only played 16 minutes, had 17 points and five rebounds, while Itesi added 16 points and seven rebounds in just 16 minutes of game time as well. Reigning MVP Animam had 14 points and nine rebounds in 14 minutes of action.

It was all NU right from tip-off. The Lady Bulldogs opened the game with a 25-14 edge at the end of the first quarter and limited the Lady Maroons to just five points in the second period. NU relentlessly pounded the State U defense, and Camelo’s three gave them a 60-19 separation at halftime.

Aquino opted to give minutes to his bench players in the second half, and his wards calmly executed their offensive sets and played stingy defense at the other end. Jeeuel Bartolo’s three and Harada’s charity widened NU’s lead to 70-27 by the 2:44 mark of the third quarter.

“I have to give them time. I have six new ones. Five rookies and one transferee. Still, we need more of that in the coming games to give them exposure, to be at ease in how they play. The potential is not yet there but I hope the more games we play, they can make it up and show why they’re here in NU,” shared NU head coach Patrick Aquino.

And the defending champions’ second and third stringers were able to shine.

Transferee Kaye Pingol went a plus-39 in 14 minutes of play, finishing with 14 points and five steals. Jeanne Camelo and Samantha Harada added 13 and 11 points respectively, with the latter hauling down 10 boards as well. All but three of the Lady Bulldogs scored in the contest.

Despite the victory, Aquino lamented his team’s poor percentage from the perimeter and charity line. The Lady Bulldogs converted 29 out of 59 free throws and only sunk five out of 26 threes.

“I can’t find any words for how awful our free throws were. That’s 30 missed free throws… And then the awful shooting still continues after four games… But again I give credit to them because they got back on defense and they way they played defense was very good,“ commented the four-time UAAP champion coach.

Aquino’s team dominated the boards with 72 rebounds, 37 of which came in the opposition’s court. These in turn led to 24 second chance points, while UP only had 43, 11, and nine respectively. In addition, the Lady Bulldogs procured 58 inside points versus the Lady Maroons’ 26.

Lourdes Ordoveza paced UP with 10 points and seven boards, while Noella Cruz followed suit with nine points and eight rebounds.