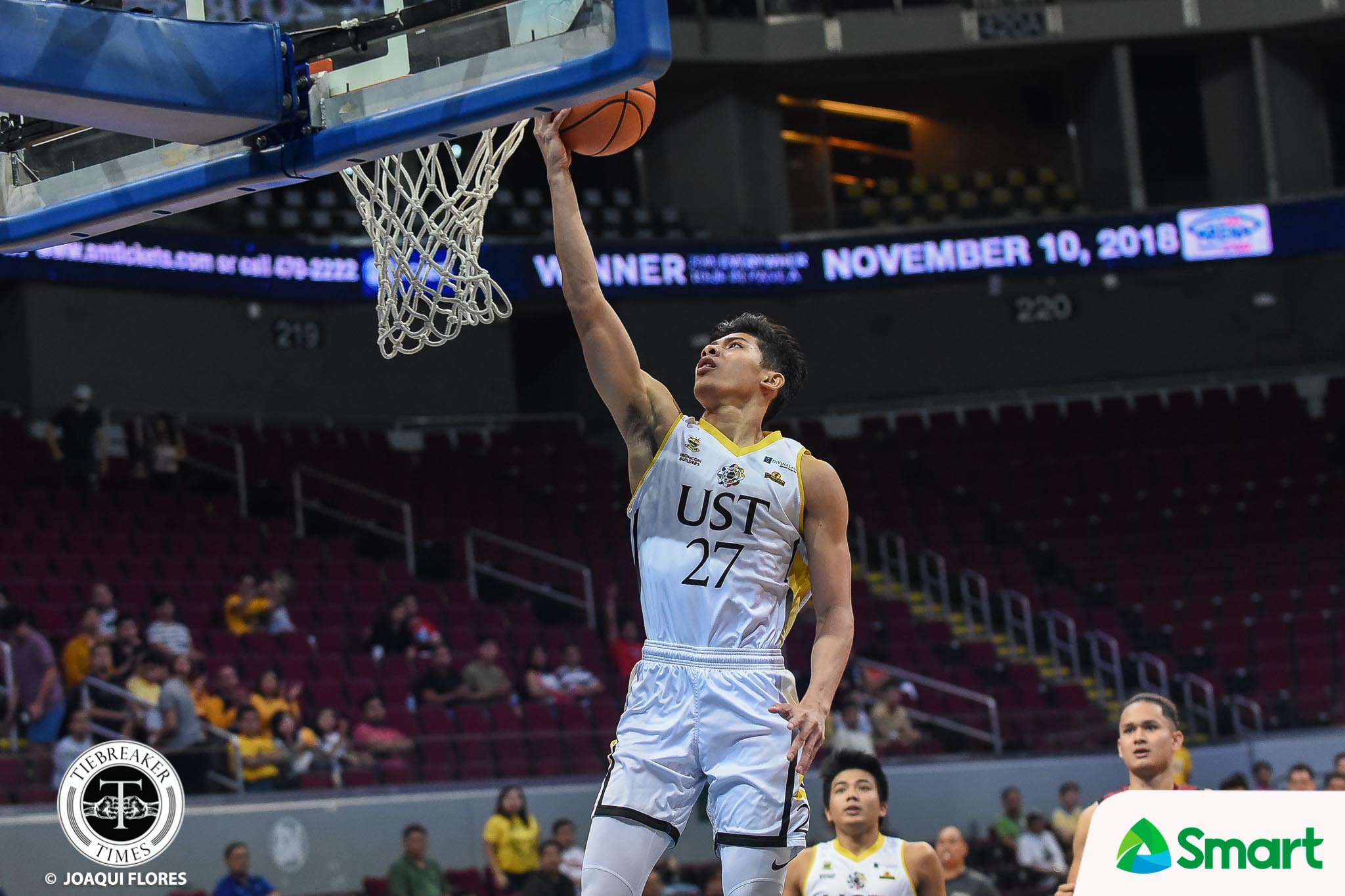 There’s a message Aldin Ayo has always told his teams: How do you beat effort? With more effort.

After seven games, it seemed that the University of Santo Tomas Growling Tigers have embraced the mantra, running circles around a bewildered University of the Philippines Fighting Maroons to take an 86-72 wire-to-wire victory, Wednesday afternoon at the SM Mall of Asia Arena in Pasay City.

And the Growling Tigers played inspired basketball, dedicating this one to their ailing brother Steve Akomo, who is confined in UST Hospital due to a blood clot in his brain.

But it was not just the super rookie who did the damage, as every Growling Tiger plugged in had a hand in the victory.

“Everybody came out to play. Almost all of my players were playing. We were more relaxed, just playing basketball and having fun. We were playing as a team. I think that was difference compared to our previous games,” Ayo beamed.

Riding off their morale-boosting 80-66 win over the UE Red Warriors last Saturday, UST raced to an early 8-0 lead and didn’t look back.

The frontline of Enriq Caunan and Zachy Huang made life hard for Bright Akhuetie during the first half. Moreover, the Growling Tigers slashed through the lanes at ease, attempting 20 free throws in the first half.

At one point, UP assistant coach Ricky Dandan even called out the Fighting Maroons for being outworked by the Growling Tigers during the second frame.

The Growling Tigers would lead by as much as 30 points in the game multiple times in the third canto.

The backcourt trio of Renzo Subido, Kenneth Zamora, and Marvin Lee had 13, 12, and 11 points respectively, knocking down nine of UST’s 11 triples in the game.

Akhuetie and Diego Dario tried to pull off a late comeback, as their combined efforts helped UP cut the lead down to just 14 points, 83-69, with 1:59 left but Lee knocked down a cold-blooded triple to stop UP in their tracks.

The Cameroonian big man, who has yet to win against an Aldin Ayo-mentored squad, was able to finish with 18 points but was limited to just 11 rebounds – down 5.5 boards from his averages.

With the win, UST and UP end up tied to end the first round with identical 3-4 slates. The Growling Tigers will have the momentum entering the second round, as they are riding a two-game winning streak.

Javi Gomez de Liano chipped in 12 points for UP, as Juan Gomez De Liano, who was averaging 19.3 points per game prior to this contest, was held down to just nine points.

Both UST and UP will open their second round campaign on Sunday, October 14. The Growling Tigers will face the Far Eastern University Tamaraws at 2:00pm, while the Fighting Maroons take on the Ateneo de Manila University Blue Eagles in the next game. Both games will take place at the SM Mall of Asia Arena.