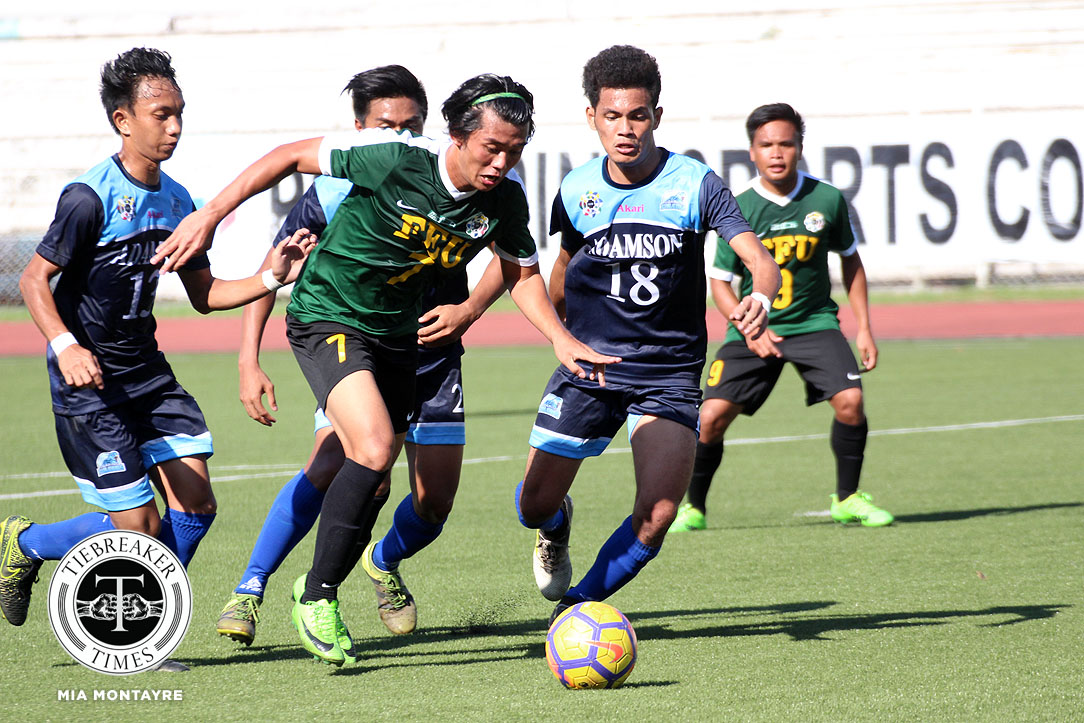 The Far Eastern University Tamaraws may be in unfamiliar territory, but things are finally looking up for last season’s finalists.

The Tamaraws got their first win of the UAAP Season 80 Men’s Football Tournament with a 7-0 victory over the Adamson University Soaring Falcons, Thursday afternoon at the Rizal Memorial Stadium in Manila.

“Today, I’m really satisfied because we really desired to win that’s why our practice focused on scoring,” commented FEU’s Korean coach Park Bo Bae. “We did 7-0 that’s why I’m happy for today’s game.”

After a flurry of chances, the Tamaraws finally seized the lead at the stroke of halftime. With only four minutes left in the first period, FEU finally breached the Adamson defense with two fine goals.

Rico Andes gave FEU the lead when the winger latched on Dominique Canonigo’s through ball to shoot past Adamson goalie Carl Viray in the 41st minute. Four minutes later, Marole Bungay headed a cross from the right flank to double the Tamaraws’ lead.

FEU showed no signs of rust after the break, and the Tamaraws deservedly got their third goal of the fixture. Moments after Andes hit the side-netting, Alex Rayos, Jr. tapped in left-back Renz Saldivar’s cross in the 58th minute to virtually seal the victory for the Morayta school.

Park’s men needed a statement win of their own this season to inspire confidence in one another, and they had exactly that today. Adamson as good as gave up, and the San Marcelino school were there for the taking.

Audie Menzi got into the scoring act when he headed Donggyu Jung’s corner kick past Viray in the 65th minute, while Andes beat the offside trap to get his second goal of the afternoon.

Already up 5-0, FEU chose to show no mercy versus Adamson. Andes beat the Soaring Falcons defense to secure his hattrick, while substitute Harold Alcoresa’s strike from outside the box put the icing on FEU’s cake, two minutes from time.

Following two losses and as many draws, the Tamaraws finally barge into the win column after a 7-0 thrashing at the Soaring Falcons’ expense. “We only have 14 players (after two injured players) but I believe in our players’ abilities. We (shall) prepare more. I think in the second round we can get better results than the first round,” added Park.

FEU will look to build on this win then they go up against the National University on February 25, 3:00 PM at the FEU-Diliman campus. On the other hand, Adamson shall hope to upset the Ateneo de Manila University on March 1, 2:00 PM at Rizal Memorial.

Prince Eze towers over Batangas-EAC, tows Perpetual to even slate