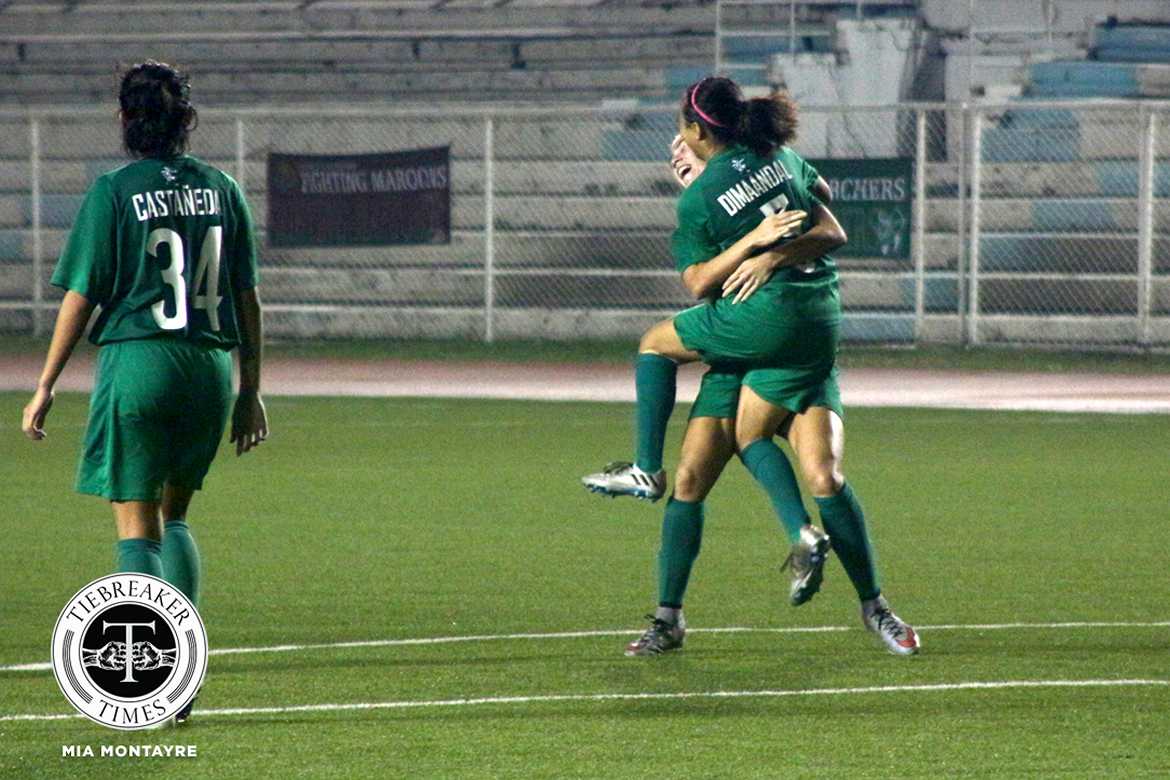 In a rematch of last season’s finals, the De La Salle University Lady Archers got some measure of revenge as they kickstarted their UAAP Season 79 Women’s Football Tournament campaign with a 2-0 winover the University of the Philippines Lady Maroons.

Kyrhen Dimaandal (45+1′) and Kyla Inquig (47′) provided the goals for the Lady Archers tonight at the Rizal Memorial Stadium in Manila. BG Sta. Clara (55′) pulled one back for State U.

“That’s not my team,” quipped La Salle coach Hans-Peter Smit. “They’re not playing the way they’re supposed to. Too many mental lapses… At least we were insured with two goals. That helped a bit, but mentally they’re not prepared yet.”

As expected, the first half was an enthralling period as both teams played their distinctive brands of attacking football. La Salle moved the ball wide while UP tried to play through the center. A good sequence of play allowed Sta. Clara a sniff at goal which was saved by La Salle skipper Inna Palacios.

From then on the Lady Archers dominated the contest. Dimaandal and Metillo tried their luck in front of the UP goal only for both of them to miss the target. Sara Castañeda then had a free kick which was blocked by the Lady Maroons’ wall.

La Salle earned a 1-0 advantage at the break against UP and the situation improved for the Lady Archers when both teams returned to the pitch. The Lady Archers were awarded a free kick. Up stepped Inquig who directed the ball home at the 47th minute.

READ  The lows and newfound highs of the Lady Bulldogs

Just when things were going well for La Salle, UP found a light at the end of the tunnel courtesy of Sta. Clara. The Lady Maroons launched a free kick into the Lady Archers’ box and Sta. Clara capitalized on the scramble to pull one back.

Both teams had chances to clinch that game-changing goal. Dimaandal failed to follow up Andaya’s attempt and the ball was cleared by the Lady Maroons while Cristina Delos Reyes blitzed past the Lady Archers’ defense only for her to shoot wide at the other end.

Right at the death, UP had one last chance to earn a draw. Sta. Clara tried her luck once again with a powerful shot which was parried away to safety by Palacios.

The Lady Archers eventually prevailed 2-1 over the defending champions Lady Maroons as the latter suffers their second straight loss.

“A win is a win. I’ll not take it away from them but they still need to prepare a lot more mentally. They need to get back into the game. That’s not the way they played in the PFF Women’s League. We’ll see what happens,” concluded Smit.