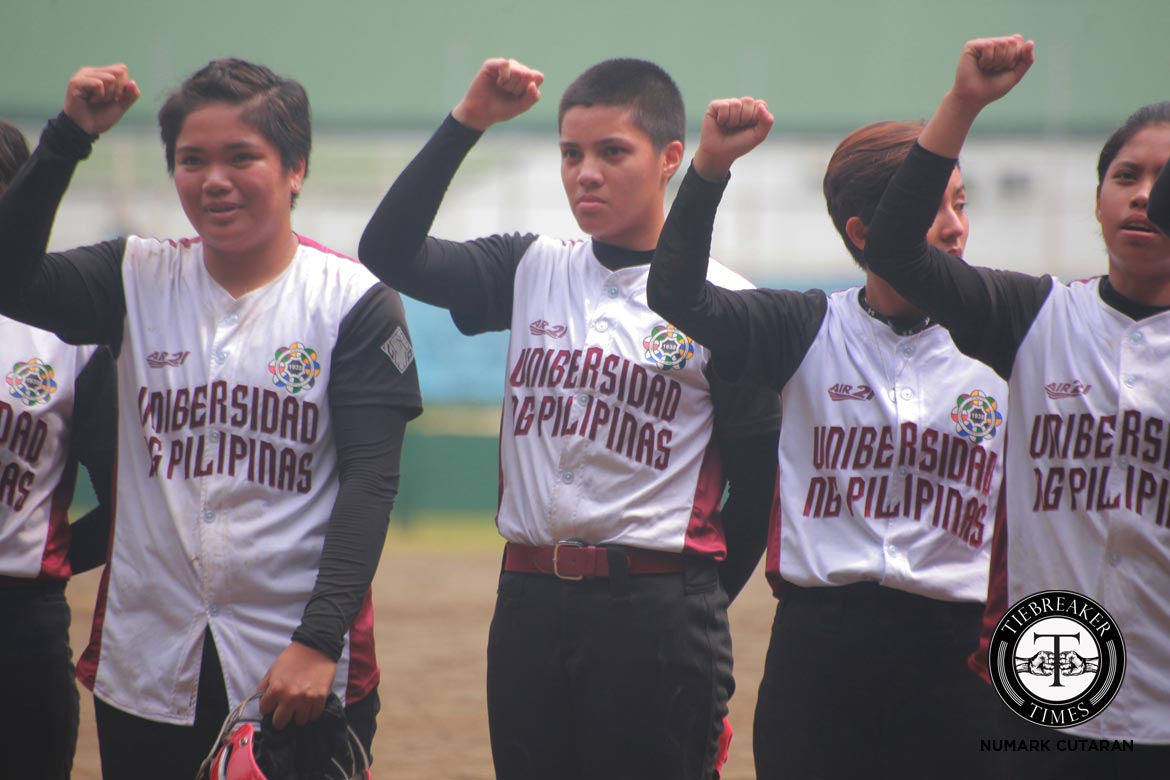 With their backs against the wall, the University of the Philippines Lady Maroons continue to find ways to keep their slim playoff hopes alive.

A clutch home run by skipper Gelai Penales during the end of regulation followed by the speed of Jaz Movido spoiled the Ateneo Lady Eagles’ seniors day and kept the Lady Maroons afloat, taking a 5-4 extra inning win, Saturday morning at the Rizal Memorial Baseball Stadium in Manila.

The win lifts UP to a 4-6 slate, mathematically still in the playoff hunt as they face the NU Lady Bulldogs twice on Monday, March 5. The Lady Eagles, on the other hand, ended their season with a 1-11 slate.

And with the Lady Eagles poised to take the game at the bottom of the seventh inning, it was UP’s defiant skipper who delivered.

“While I was stepping up sa plate, iniisip ko lang na makatapak — I wasn’t thinking of hitting a home run,” Penales shared.

With two outs, the Miram College alumnae slammed a solo home run to send the game into extra time. This was her second run of the game.

“Kaso yung gusto kong ball yung binigay niya. I didn’t really know that it was over [the fence]. When I reached third base, dun ko lang nalaman na home run na,” reflected Penales, who went 1-of-4 at bat.

Bea Parma was able to connect on a two-out RBI double that brought home sophomore Samantha Baterina at the top of the eighth to give Ateneo back on top. However, the Lady Maroons were not to be denied.

“We set tiny goals for each other na makaka-help sa hits namin. What we’re thinking is just we should only get on base,” Penales said.

A double by Jaz Movido, sister of La Salle’s ace libero Jopet Movido, brought home second base runner Abanes for the tying run. With Chantal Bongat reaching base due to a walk, an overthrow by Ateneo’s third basewoman while Juliet Omul was at bat that brought home Movido for the winning run.

UP was the first to punch in a run during the first inning after Penales was brought home due to a walk with the bases loaded. However, a Lady Maroons error in the fifth inning led to an Ira Nevalga to knot things up while a 2 RBI single by Parma during the sixth inning gave Ateneo a 3-1 edge. Abanes was able to answer right back at the bottom end of the sixth after a sacrifice fly by Clarisse dela Cruz.

Clarisse Dacanay, Ira Nevalga, and Shereen Salvatierra of the Ateneo Lady Eagles ended their UAAP careers in the game.