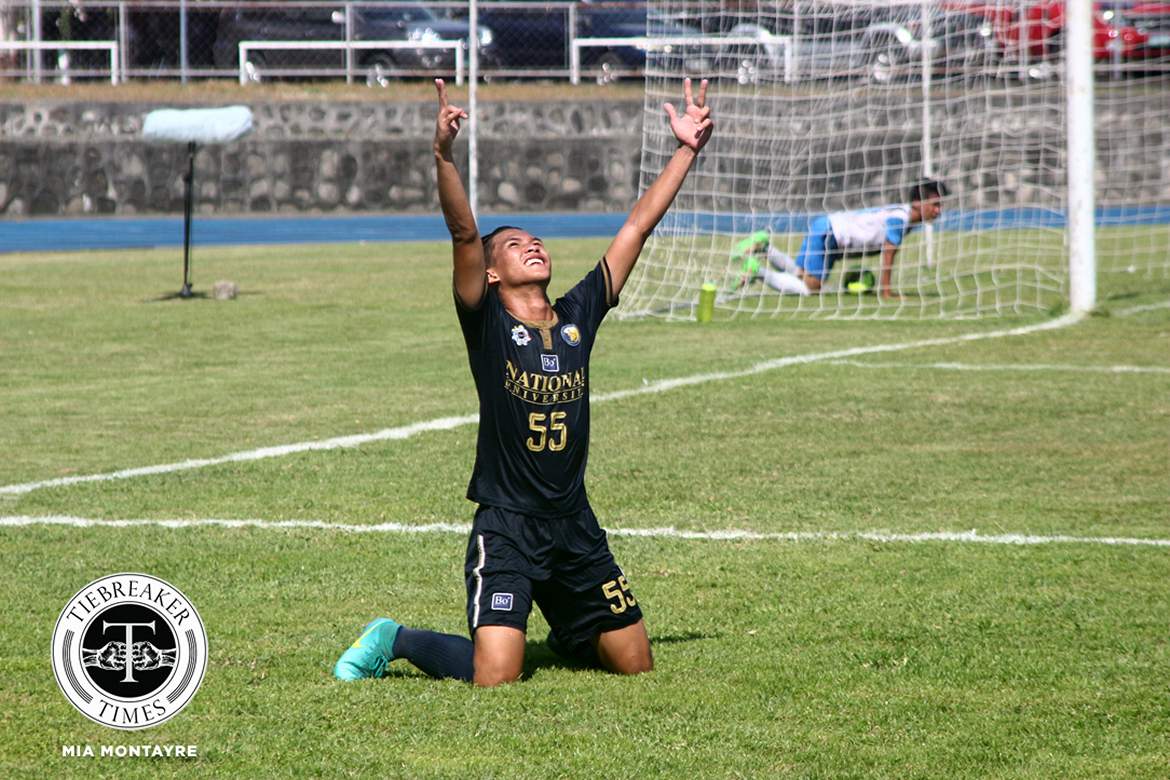 The win brought Bulldogs back into the Final Four race, as their 13-point tally is enough to share fourth place with the University of Santo Tomas at the moment. On the contrary, Adamson remain stuck in last place with their three-point haul, still two points less than seventh-placed University of the East.

Sweltering heat made things extremely difficult for both teams early in the game. Neither side carved out clear cut chances in the first 20 minutes, which quickly passed by.

Between the two, the Bulldogs had the better flow moving forward, but their clumsy showing in the attacking third wasted the momentum they would build. It was clear that coach Jose Mari Aberasturi wanted his players to utilize the flanks, a move that didn’t initially pay off.

Meanwhile, Adamson managed to claim a few set piece opportunities that they weren’t able to make something out of. When in open play, they did well to keep the ball until they crossed the halfway line, as National U’s defense often forced them to lose possession.

In the 22nd minute, a decent opportunity to break the deadlock came NU’s way through Lawrence Colina. He successfully hunted down a loose ball but his attempt was met by Adamson keeper Nickie Yap, who got the nod in replacing suspended first-choice goalkeeper Carl Viray .

#ReadMore  UP's Manuel believes Maroons are getting there

Three minutes later, Yap was in the thick of the action once more, as he had to be alert to catch a Jerico Dagsa header. It marked the time the Bulldogs began to pile more pressure onto the Falcons, who were up to the challenge until late in the first half.

Understanding the conditions with which the players were dealing, Aberasturi exercised patience and expressed satisfaction with his players’ attitude in the match. “Sinabi ko sa kanila na kailangan talaga manalo. If we want to keep yung objective to reach the final four kailangan manalo. Dahan-dahan naman silang sumunod sa plano,” he noted.

As they began to settle into the game, it was only a matter of time until the Bulldogs made their dominance count. Benefiting from Yap’s poor goalkeeping, Sampaga found himself in the right place at the right time to nod the ball straight into the net. It was a heartbreaking moment for Adamson, who had otherwise held firm apart from the mistake made by the deputy goalkeeper.

Prior to going behind, Adamson had generated a rare chance to test Chris Perocho when Brando Martin struck the ball just wide with 10 minutes left in the first half.

The Bulldogs took the narrow lead into the break and showed steely determination to pad it right from the start of the second half. Taking control of the contest, National U continued to press the Falcons, and eventually found what they were looking for — and more — around 15 minutes into the second half.

The Mike Arbela-Patrick Valenzuela connection was too much to handle for Coach Nolan Manito’s boys, as the pair wreaked havoc to put the game beyond Adamson’s reach. The first of the two goals they produced came in the 56th minute, when a brilliant run by Arbela down the left flank set up Valenzuela, who had the luxury of whipping the ball in from close range to double NU’s lead.

#ReadMore  Racela on FEU streak ending: 'Everything comes to an end, just like yesterday'

Six minutes after, it was Arbela’s turn to benefit from Valenzuela’s exploits in the middle. The skipper first got the ball from a Colina pass. In the same place where he scored, Valenzuela attracted the attention of the Adamson defense, which in turn liberated the winger, who had an easy job of tucking the ball into the net.

National U planned to take advantage of the demoralized Adamson side, but a dip in intensity and quality of attacks spared the Falcons from conceding more goals than they would have liked.

In the end, the Bulldogs claimed another goal through a needless penalty conceded by Adamson’s Jesus Cayadong III. The substitute fouled Jacob Gomez in the box, which led to Colina finishing the spot kick and collecting his sixth goal of the season in the process.

Normally, a win by such margin pleases coaches, but Aberasturi can’t be too happy with the result as they left the pitch knowing that they hadn’t grabbed enough goals to improve their goal difference, which may be crucial in deciding who gets into the Final Four.

With four games still on the horizon, Aberasturi and the Bulldogs will now look to build a winning streak when they face the UE Red Warriors this Sunday. Adamson, meanwhile, will be squaring off with the University of the Philippines Fighting Maroons earlier that day.