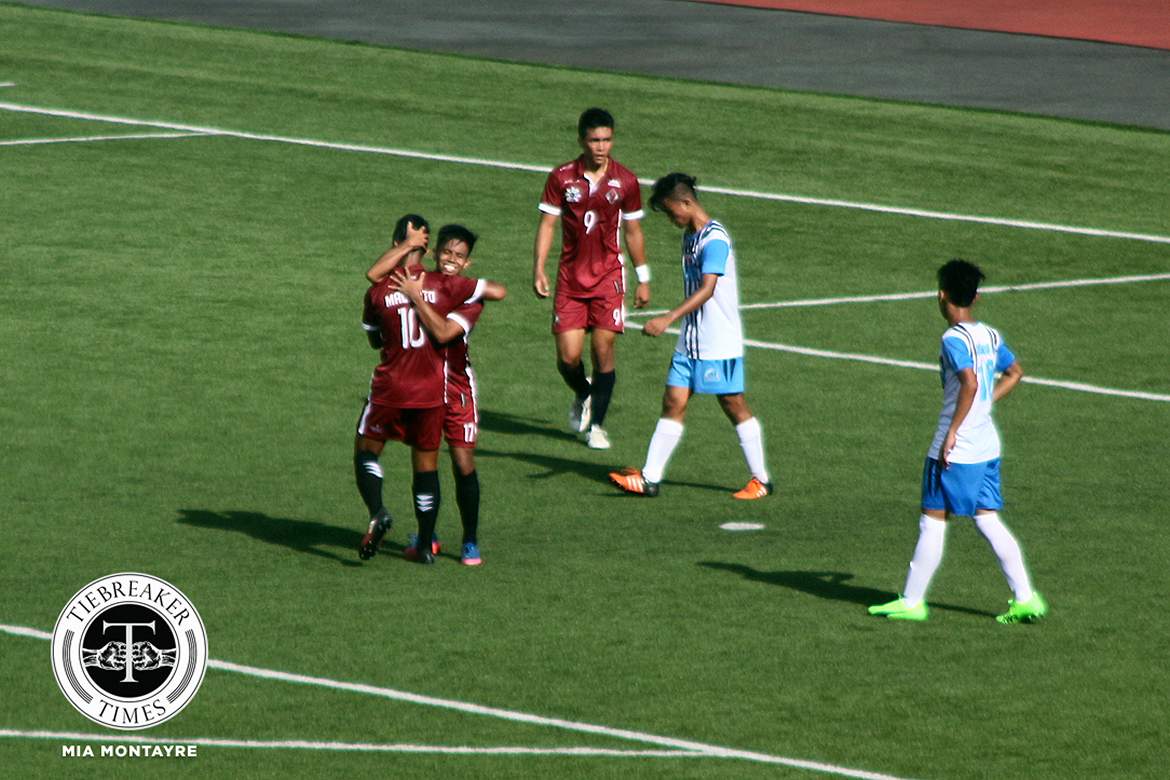 An Ian Clarino effort early in the second half sealed the points for the University of the Philippines Fighting Maroons, who had to endure a tricky 2-1 encounter with the Adamson University Soaring Falcons Sunday afternoon at the Rizal Memorial Football Stadium.

The result gives UP a temporary hold of second place, as their 5-1-1 win-draw-loss record puts them three points above the Far Eastern University Tamaraws, who have played two games less than them, one of which comes later today against the University of the East Red Warriors. As for Adamson, they finish the first round three points off with a 1-0-6 win-draw-loss slate.

Unsurprisingly, the better team on paper dominated the game. UP saw more of the ball as Adamson employed a defensive approach. Yet despite the apparent gap in quality between the two teams, the Maroons did not have it easy.

The first real chance of the game happened 13 minutes into the match as King Miyagi met Daniel Gadia’s clever pass to break down the stubborn Falcons’ defense. It worked for UP, who needed only a Miyagi finish to go in front. Unfortunately for them, Adamson keeper Carl Viray read the sophomore’s intentions.

The Adamson goalkeeper was at it again four minutes later, stopping Miyagi’s effort once more after the striker linked up with James Condat down the right side.

As the game gradually become more open, Adamson got themselves a chance to shock the Fighting Maroons in the 19th minute. Bless Jumo got on the end of a set piece to test UP goalkeeper Ace Villanueva for the first time in the game. It was a shot on target which the seasoned veteran managed to gather.

Afterwards, UP had two more good cracks at goal, beginning with Gadia’s pursuit of goal from long range anew. Like his first attempt, the second was caught by Viray, then a smashing hit by Ian Clarino just smacked the crossbar, a let-off for Adamson whose keeper Viray was helpless in the face of such a ferocious strike.

With the way the match was unfolding, a goal was bound to come before the break, likely for UP. Their sustained pressure eventually paid off in the 43rd minute, with JB Borlongan laying the ball off nicely to Magdato, who finished sublimely past the defiant Viray.

The Fighting Maroons were unable to keep their advantage for long, however, as a corner in first half added time yielded an Adamson goal. Jumo (I) got the final touch in a scramble inside the box with the rebounding header. It was the last meaningful touch of the half, as the referee halted the first half after the restart.

Conceding a goal served as an impetus to the Maroons, who continued to barrage the Falcons’ defense. Magdato targeted to garner his second of the afternoon but was denied twice by the pesky Adamson team, first by a brilliant Viray save then by a concerted blocking effort by the Adamson back line.

The Falcons’ resistance was eventually broken down, and this time around it was Ian Clarino who got the vital touch. Failing to clear a corner properly, Adamson invited the elder Clarino to tuck the ball into the net in the 56th minute.

Aiming to add more to their slender lead, UP’s relentless attacking produced more opportunities to secure the victory. Gadia’s playmaking off the break put substitute Ray Sanciangco in a good area to convert. Receiving the through ball, the rookie winger then had a go coming from the right side to come up with a shot saved by Viray.

The Adamson shotstopper was rarely away from the action as he got on top of attempts coming from Miyagi and Magdato, keeping the Falcons in the game midway through the second half.

Towards the latter stages of second half, UP kept knocking on the door to clinch their third goal in the game. Chances went begging though as Gadia, Miyagi, and Borlongan frustratingly wasted their efforts.

Those may have proved to be crucial misses had Adamson stirred a decent opportunity to peg back the champions. Nonetheless, the best they could do was send Khristian Melliza on a surging run down the right flank in the 87th minute. His move was eventually cut short by John Abraham, who dealt well with the Adamson forward to clear the danger away.

At full time, the score stayed at 2-1, enough for UP to win but perhaps a bit flattering for Adamson considering the balance of play. Yet for Coach Anto Gonzales of UP, it reflected his team’s poor performance against an opposition many had expected them to dispatch with ease.

“It’s an uninspiring performance to say the least. We’ve been working so hard trying to improve, improve, improve and today we just didn’t show any of what we picked up in training,” the former UP Maroon standout-turned-mentor lamented despite winning the game. “I think we’ve played in spurts. The whole game was just uninspiring.”

Both teams will return to action as early as next weekend, with second round fixtures yet to be determined.

Staunch Vicente not worried with reputation