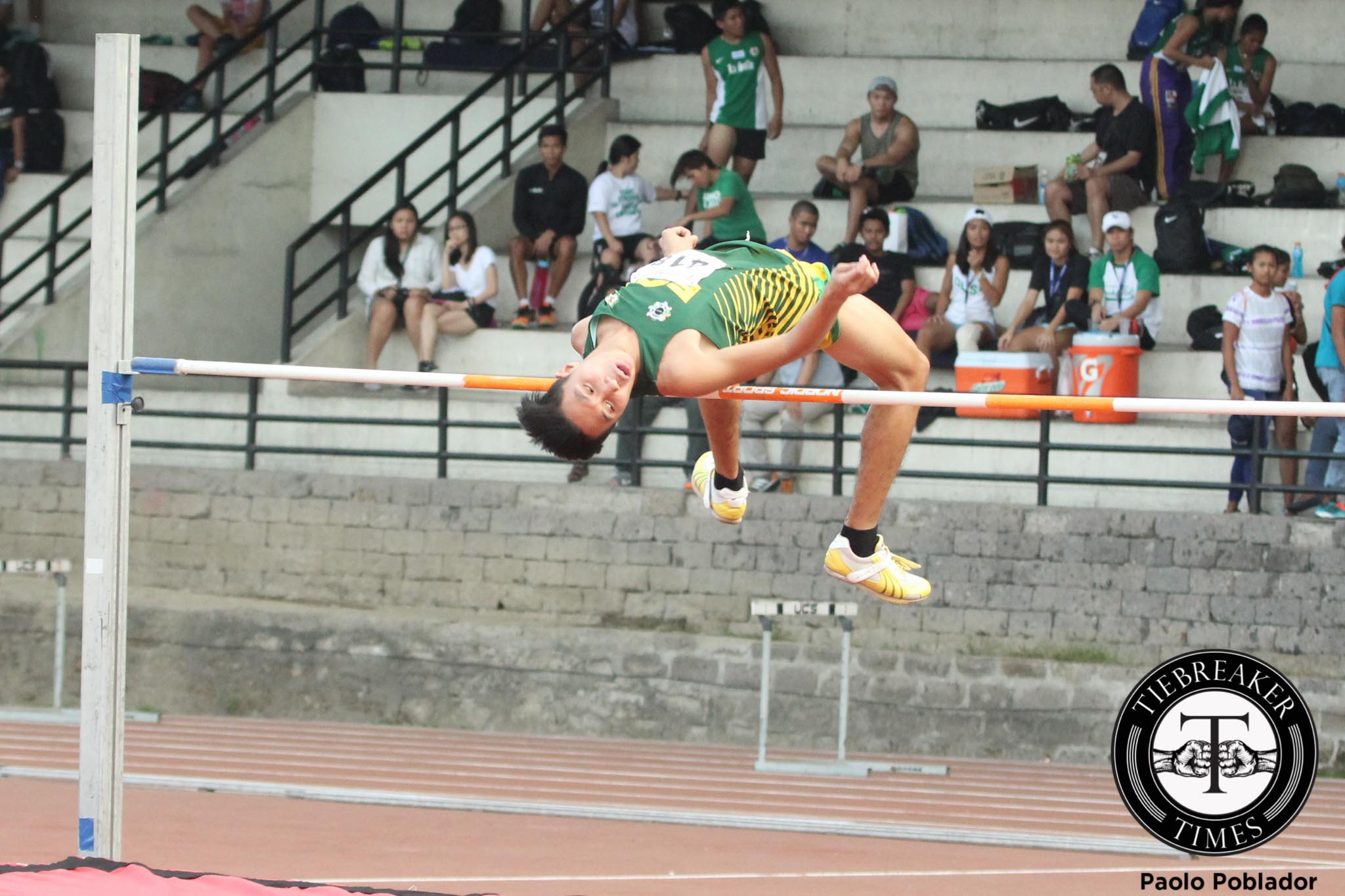 After the Far Eastern University’s dominant showing so far, the overall championship hunt seems to be within reach. The University of Santo Tomas (UST), the University of the Philippines (UP), and De La Salle University (DLSU) are all still hanging on to maintain their respective overall podium finishes.

UST will try to get an edge UP and DLSU as their team can score on most events much like FEU. UP, on the other hand, will protect their throwing events stronghold and will look to score on the last remaining sprint events. DLSU will hang on with their bits and pieces of points from the distance events, and will rely on a handful of people to try and go head-to-head with UP in the throws and sprints.

Day four kicked off with the 400m hurdles, with defending champion Clinton Bautista from FEU coming in as the favorite to win gold. However, it was UAAP high school record holder and Philippine National Games – Luzon Leg junior champion Jaime Mejia from UP who came in strong, clocking 55.06 seconds to rank first in the qualifying round. UST’s Joel Hera and DLSU’s 400m champion Michael Del Prado trailed behind Mejia with 55.25 and 55.31 seconds respectively. Coming in fourth was Hera’s teammate Gerard Morales with 56.16 seconds, while Ateneo de Manila University’s (ADMU) Rabbi Villanueva registered as the sixth fastest with 56.39 seconds.

Bautista jogged the qualifiers and looked relaxed the whole race after only clocking 56.92 seconds. Having competed in multiple events already, the defending champion decided to just qualify and use his remaining energy for the finals.

Much time was given to the quarter-mile hurdlers as long distance events were competed in between the heats and finals.

It was a tight pack from start to finish as UST and FEU continued to exchange blows and teases to contest the victor. It came down to the last lap for the battle for gold. UST’s Kevin Capangpangan edged out compatriot Gregg Osorio for gold with a winning time of 15:49, while Osorio was only a second behind with 15:50. FEU’s Reynold Villafranca couldn’t hold on in the last lap and only managed to clock 15:52, still an impressive time, as he settled for the bronze. Also in the competition was 800m champion and UAAP record holder Elbren Neri, who put up a good fight until the last lap, when he had to pull out of the race due to abdominal discomfort.

Another 5000m event held during the day was the racewalk. Top seeded athlete Lambert Padua from UST, who had won gold in the 10000m racewalk, did little to disappoint as he crossed the finish line for gold with a new UAAP record of 24:07. Padua asserted his racewalking dominance by overlapping silver medalist Edwin Verdera, who clocked 25:44, over more than one and a half minutes slower than our gold medalist.

The battle for third was an interesting one, as FEU’s John Penetrado and ADMU’s Jethro Alba continued to exchange leads throughout the race. Alba paced Penetrado for the most part and maintained his composure. However, Penetrado would burst for a few meters every time Alba overtook him. It was a battle of wills and guts, with the FEU racewalker getting the edge after finishing bronze with 26:19. Alba finished fourth with 26:33.

Come the 400m hurdles finals, Mejia looked like the favorite to clinch the gold. However, Bautista dominated the entire race, showing everyone that he had reserved all of his energy for this moment. Bautista clocked a fast 53.80-second gold medal run. Mejia ran out of gas coming off of the last hurdle, which allowed Del Prado, known for his last minute overdrives, to capitalize on the situation and nab the silver medal with 54.03 seconds to show. Mejia happily settled for bronze with a still-impressive time of 54.24 seconds.

Much like in the decathlon, with the absence of defending champinon Janry Ubas, the field was now open for anyone who wanted to clinch the gold. Teammate Kieth Quilo easily took the prize with a jump of 1.98 meters, almost clearing 2.0 meters before fouling out. The University of the East’s (UE) Tommy Balbuena fell short of challenging Quilo after only clearing 1.95 meters, still an impressive jump for silver medal. Making a comeback was UP’s Robert Nasis for the bronze medal after clearing 1.90 meters, registering less fouls than triple jump gold medalist Kirk Bacas of FEU who also jumped 1.90 meters. Bautista added to FEU’s celebration for their overall championship hunt after jumping 1.80 meters for fifth place.

Just as predicted, UP protected their throwing stronghold after a massive gold-silver finish in the discus throw to keep them alive in the team podium finish hunt. Last year’s gold and silver medalists Elijah Guevara and Michael Baguisa from UP simply exchanged positions this year with the latter winning gold. Baguisa threw 37.10 meters to clinch first place, farther than this teammate’s 37.05-meter throw from last season. On the other hand, Guevara threw 37.03 meters. Mat Crespo from DLSU settled for bronze with his 36.51 meter throw.